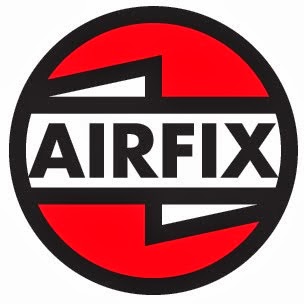 Airfix.  Oh come on - what else could it possibly be?  Without Airfix, and especially their 1/72 and HO/OO scale offerings, I probably wouldn't be writing this and even if I had many of you wouldn't be reading it.  We'd probably all have proper manly hobbies instead.  What a terrible thought! 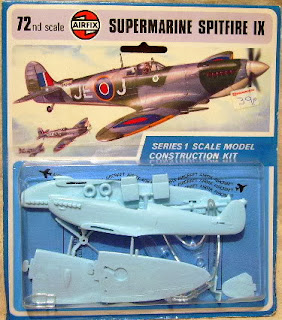 As has been mentioned before, the first kit I built was the notorious old Mk.IX Spittie, which came in the carded packaging of the early '70s.  Below is the Mk.IX I rescued from oblivion last year.  Given Airfix's rather chequered history is it pleasing to see the company in apparently good shape with new toolings being added each year. 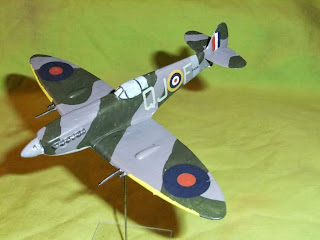 This is the first of a series (hopefully with 26 parts!) which may reveal deep insights into my personality.  Or probably just some pictures of toys.  Anyway, they won't all be as obvious as Airfix.
Posted by Tim Gow at 22:29

Email ThisBlogThis!Share to TwitterShare to FacebookShare to Pinterest
Labels: A to Z of Wargaming, Airfix

Where would we be as modellers without Airfix?

Where would we be as wargamers without Airfix?

Where would we be?

I'm looking forward to the rest of this series of posts. I built my first Airfix kit aged 6. It was a Mirage fighter. When finished it was covered in lots of lumpy glue. When painted it had bright blue wings and a red fuselage. I think the pilot ended up with a pink flying suit. Poor chap. . . . . I was only six. My next kit was the Spitfire. At this point I had a eureka moment, the penny dropped and I understood camouflage. This also marked the beginning of a continual striving for authentic accuracy in my painting.

Aircraft, Tanks, Destroyers, Battleships, Galleons. As I said at the top, looking forward to the series. Come on Tim take me back to my youth before dementia or the alcohol finish me of. :-)

Apart from a brief time when I was about 12 of building aircraft kits (Mitchell, Beaufighter and a Short Sunderland - think that was about it) my first encounter with wargaming was with Airfix plastics - American Civil War. Aside from importing metals - a bit of a consideration money- and time-wise, Airfix figures was all that was available in this country in the mid-1970s.

Think my first romp with Airfix was
their diorama sets, I had The Red Baron over the vacuform tranches,
Pearl Harbor, and Guadalcanal to
name a few.

This was one of many models my mother got rid off in one of my moves. If I had them I would had gone the 20mm route instead of 15mm.

"Deep insights into your personality"?

I am very afraid now!

The earliest Airfix kit I can remember building was the Corsair. I'm sure there were others before that but I think it sticks in my memory as I took the radical step of painting the pilot before sticking him in the cockpit, so I had to wait while the paint dried to glue the rest together.

It was some time in the late 60s, maybe 1967ish? Might even have been earlier as my Airfix magazines date from then.

Al
Good to know you're reading them Al.

Stephen Thomas
Your painting has certainly come on a bit since then! Pink flight suit eh? I wonder what that reveals about you.....

Archduke Piccolo
Prior to the widespread availability of Matchbox kits, and occasional FROG and Revell kits, Airfix was really the only game in town here when I were a lad.

Don M
Dioramas? You must have always been rich.....

Jon Yuengling
20mm is the one true scale. This new-fangled 15mm stuff will never catch on......

Paul Foster
You should be.....

Martin Rapier
F4U Corsair? Not a kit I ever had. I did have the Revell A-7 Corsair which came with a simply stupendous quantity of bombs & rockets.

I remember making a Airfix Tiger Tank and getting lots of wheels glued to my mums dining room table ,which led me to getting a desk in my bedroom for Christmas ,my first aircraft kit was not an air fix one I don't think ,it contained 2 models a spitfire and a109 and had a frame which held the painting from the box lid and the 2 aircraft as well can't remember the make ,can anyone ? my first Airfix aircraft was the me110

I was being somewhat overly generous calling them dioramas, they were very simple affairs a tank/plane/truck
with a box of airfix ho scale troops
and a vacuformed plastic base

itchy's wargames
I have heard of these sets but never seen one.

Don M
I know the sets you mean - I had the 'El Alamein' set which contained a Grant, 25pdr and 8th Army figures.

I had the Tobruk set with 8th Army figures and the classic AEC Matador and 5.5" Gun

'Johnnie' Johnson's Spit IX was also my first kit. Probably around '69. Although my first Airfix Catalogue was 1966.

Wg Cdr Luddite
I used to get old catalogues from my uncle, who was primarily a railway modeller.

Back in the late 60's Airfix fig's were about all you could get in NZ! I owe them everything!

I remember this kit from when I was young. It was in local papershop, and my first one was an Italian aircraft. Don't remember anymore which one it was, but I sure know it was fun to built it!
All those Airfix kits (like in your previous posts) make me nostalgic!
Thanks for sharing!

You appear to have stopped this series after a few posts :( Are you going to pick it up again?

Either way, you've inspired me to write my own A to Z series: AFV Alphabet.

Rodger
I think many of us feel that way

Russell Phillips
It didn't stop as such - just a pause while I got distracted by other things! A new post has now been added - and thanks for the reminder!

Yay :) Happy to see this running again. It's interesting to see how your choices compare to what mine would have been.