To try out Battle Cry (on the day it arrived if you please!) I set up the first scenario in the book - First Bull Run.  Or, as it was presumably called at the time 'Bull Run.'
I used the game's board and terrain features but rather than break out the (20mm-ish) plastic toys which were included with the game, I opted to use my 2mm (Irregular Miniatures) toys.  These are mounted on 3cm frontages so they fitted into the gameboard hexes.  My 2mm armies were intended to serve in a number of 19th Century wars and are painted dark blue (with pale blue flags) and pale grey (purple flags).

So a solo game but despite my pro-Reb bias the Yanks damn nearly won!  That speaks volumes about the quality of the basic game system.  Next time I will try out Bob Cordery's idea for solo games.
Posted by Tim Gow at 16:12 6 comments:

It took me a while to order this game, but having enjoyed it's derivatives - Command & Colours (Ancients and Napoleonics) it seemed a reasonable purchase. My knowledge of the ACW is to say the least somewhat scanty, but it is nevertheless a conflict which interests me. Apart from a bit of tinkering with Richard Brook's Terrible Swift Rules in the past few years, my exposure to ACW games was mostly in the 1980s with messers Robertson, Jenkins and Munro at the Perth club. 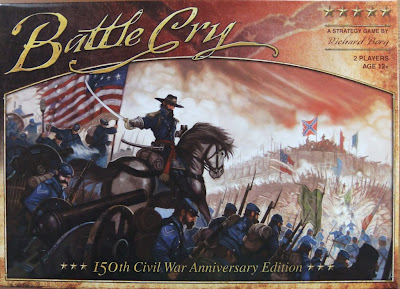 My copy was obtained (at Bob Cordery's recommendation) from Games Lore and arrived swiftly and in perfect condition.  As wells as the rules and game board, the large box contains terrain hexes, playing pieces (20mm scale plastic figures) and specially marked dice.
Within a few hours of it's arrival I had the box open and a game underway.  More on that to come soon...
Posted by Tim Gow at 10:46 10 comments:

On Saturday Len Cooksey (http://www.spanglefish.com/ivanhoefigures/) visited and between peering into various boxes of toys I managed to distract him with a game.  I had set up Bagradas 253BC for Command & Colours and offered Len the choice of sides.  Possibly prompted by the preponderance of pachyderms he opted to command the Carthaginians.  He thus represented one Xanthippus, a Greek mercenary general employed in desperation by Carthage when the s**t seemed to have well and truly hit the fan.  With all those elephants that must have been messy.
I took the role of Regulus commanding a Roman army.  Historically the Romans given a good kicking and the few survivors were traumatised by the disciplined Roman units being overrun by the enemy elephants.  No pressure then.

These 1/144 scale Polikarpov I-16s are metal single-piece castings by True North.  The I-16 seems to have attracted a surprisingly large number of nicknames - Spanish Nationalists called it 'Rata' (Rat), the Republicans knew it as 'Mosca' (Fly), to the Finns it was 'Siipiorava' (Flying Squirrel) and Soviet pilots called it 'Ishak' (Donkey).  So take your pick. 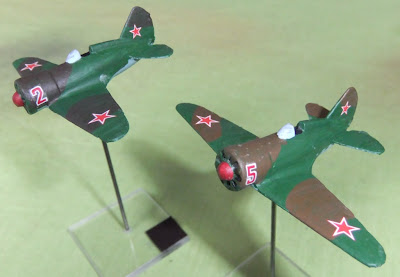 The I-16 was in service with Soviet forces from the mid-1930s and also saw service with a number of other countries, including China, Spain and Finland.  The last Spanish I-16s were retired as late as 1952! 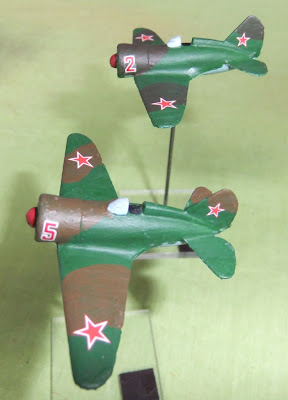 The models were cleaned up and then spray painted light grey before being brush painted and varnished. The markings were sourced from my decal box.

Given my heavy investment in 20mm WW2 Romanians, I was very pleased to find this model in production.  It is a single-piece metal casting by True North.  The IAR 80 was an indigenous Romanian design which entered service in 1940 and 66 were on strength on the eve of Operation Barbarossa. 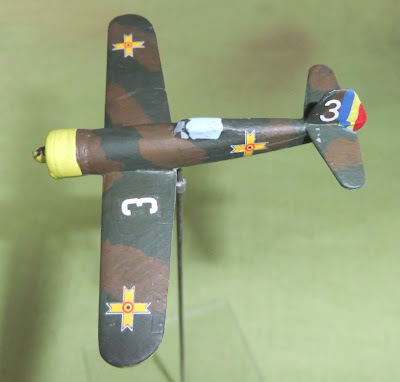 The numbers and crosses are decals which were also sourced from True North, though I opted to paint on the tail stripes.  This expands my Forţele Aeriene Regale ale României (Royal Romanian Air Force) to five models!
Posted by Tim Gow at 08:44 12 comments: 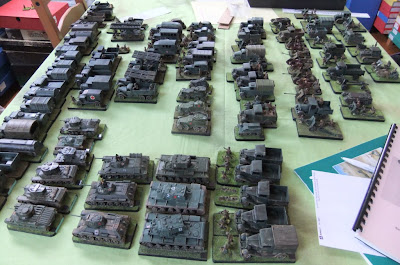 As part of my tidying up process after the recent 'Krisis at Kharkov' game (see many earlier posts...), I took the opportunity to sort out my 20mm Soviets.  The photo above shows some of the toys scattered across my table as I sort units (tank, mechanised and artillery corps) into boxes.
I also tinkered with the Rifle Corps boxes and expanded most to four divisions each, along with artillery, AT and engineer units.  Not all of these assets will neccessarily be deployed in games.
One of the corps so expanded was the Wellingrad Militia Rifle Corps - rewarded as it fought well during the Kharkov operation.

I have now compiled the programme and timetable for COW, and once printed they will be posted out to attendees next week.  They can also be downloaded from the 'Downloads' section on this blog (top right).

This was built from a Fairy Kikaku (no really!) resin kit bought from HLJ in Japan.  A fairly basic kit, it went together quite well after cleaning off a fair bit of flash.  The paint job was complemented by some markings from the decal box - the markings in the kit looked a bit rough. 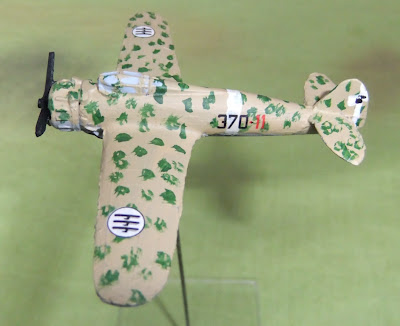 Designed for the ground attack role, the Ba.65 was quite an important aircraft, seeing service during the Spanish Civil War and WW2.  As well as serving with the Regia Aeronautica, some were sold abroad - Portugal, Chile and Iraq.  Apparently it did quite well in Spain - one shot down a Republican SB-2 - but like at lot of Italian kit, the Breda was somewhat past it's best by the time it encountered 'proper' opposition over North Africa.
I first came across the Breda 65 at an impressionable age in one of the splendid (for the time at least) Purnell 'Specials': 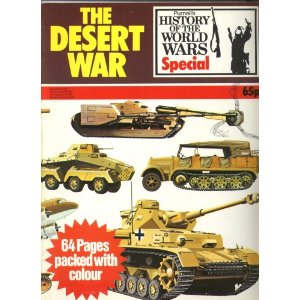 At around £8 (1,000 Yen) this isn't a cheap kit, but then nor is it prohibitively pricey.  The same company makes a selection of other unusual aircraft, including the He112 and Myrsky.  Tempting.
At last my Italians have a ground attack capability - my Brits are trembling. With silent laughter. 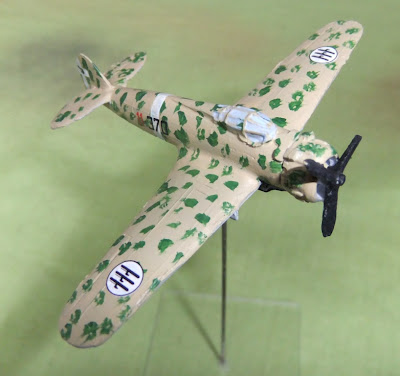 Incidentally, I came across this film clip showing Ba.65s in action over Spain, complete with excitable commentary.
Posted by Tim Gow at 09:07 8 comments:

Clobbered by Canadians at Carpiquet 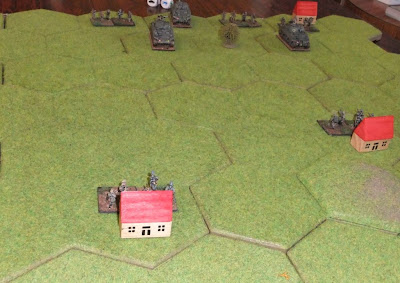 This was a game run by Martin using his 15mm toys and the Memoir '44 game system.  The scenario saw a scratch force of Germans trying to stem the Canadian advance north of Carpiquet in 1944.  All photos taken from the German side of the table.   John commanded the Canadians.  The photo above shows the opening positions on right flank, with the left below. 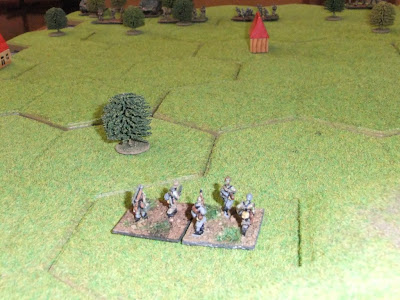 The best of the remaining photos from Kharkov now, including the Soviet commander's situation map.  Nothing has been heard of Gen Wallmanski since the battle, leading observers to believe that he accepted his Commissar's 'invitation' to join the Southwestern Front combined clog dancing and mine clearing team...