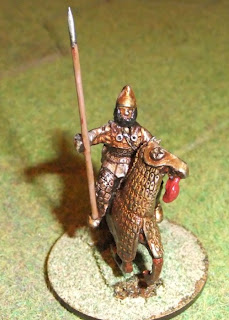 Having spent a bit of time sorting out my 25mm ancients it seemed a good plan to set up a solo game and get more use out of them.  I settled on the battle of Tigranocerta which resulted from King Tigranes the Great (above) trying to raise the Roman siege of his capital.  Historically Lucullus, the Roman commander surprised Tigranes and captured his baggage train.  What would happen this time? 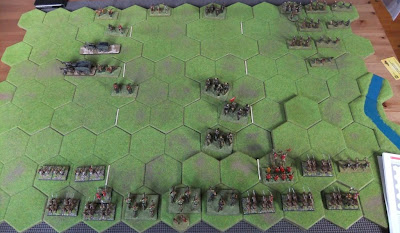 Above - the initial setup - Romans nearest.  I missed out a Roman light cavalry unit which should be on their baseline on the left.
Coming next - the game report.
Posted by Tim Gow at 17:26 6 comments:

This coming Sunday (September 2) is the date for The Other Partizan show at Kelham Hall near Newark.  I will be there along with John and Martin in our Wargame Developments capacity running our Rollbahn Ost game. 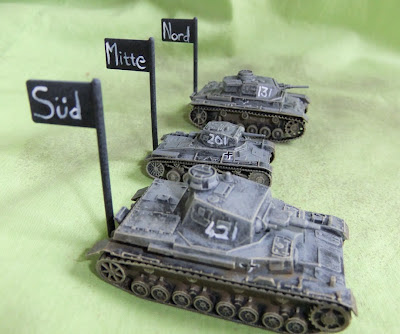 In this game three players each lead an Army Group into Russia in 1941.  It lasts no more than 20 minutes and there are Iron Crosses to be won!
If you are attending the show do come and chat to us.
Posted by Tim Gow at 09:54 No comments: 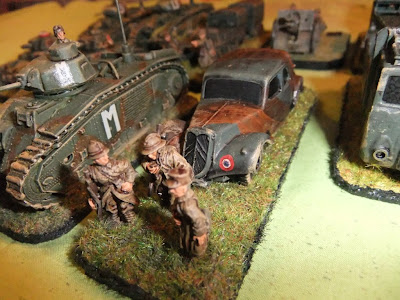 Another of my 20mm WW2 French divisions now.  Four of these DCRs were fielded in 1940.  A rather tank-heavy formation, the DCR was a bit light on support elements and had no recce capability.  Above is the Div HQ and staff.  The Char B1 is the good old Matchbox kit, while the Citroen car is a diecast from the same company.  Figures are metal castings by FAA.

Having arranged for Steve and Len to come round for a bank holiday Monday game, we then needed to decide what to play.  Steve had requested a WW1 game, so I dug out Richard Brooks's Op14 rules and set up the Gumbinnen scenario.  I've run this particular scenario a couple of times before (see report here) and I knew it was about the right level to occupy a couple of hours.
The game was set up on my Hexon tiles and used my 6mm Irregular Miniatures figures.  Len arrived first an opted to lead the Russians (he kept having flashbacks to reading Solzhenitsyn's August 1914).  This left Steve in the spiked helmet while I oversaw the game mechanisms and provided advice where it was (most unwisely) sought.
Posted by Tim Gow at 09:57 4 comments:

Big Phil sorts it out

The first of two games I managed to fit in over the Bank Holiday weekend was this Command & Colours scenario using my 25mm toys on Hexon terrain.  The battle of Crocus Field was the culmination of Phillip of Macedon's invasion of Thessaly in 253BC.   Phillip II led the Macedonians, complete with their innovative new pike armed phalanx, while the opposition consisted of a Phocian force under Onomarchus.
I played the game solo - a task made easier by the card-driven system which CCA uses.  My approach was to represent each side in turn as honestly as I could, although I confess to a slight bias against the Macedonians.  What could go wrong?
Above we see Phil urging his phalanx forward.  These are old Minifigs in all their bendy-piked glory.
A pretty historical result then, and possibly a vindication of this pike-wielding lark.
Posted by Tim Gow at 10:12 2 comments:

The 'V' and 'W' Class destroyers were produced in some profusion during the latter half of the Great War, and many continued in service with the Royal Navy during WW2.  The class set the template for inter-war destroyer designs.  Which is why I felt the need to own six of them.   They are MY castings with the usual florist wire masts and drybrush over black paintwork.
The title of the post?  Try this for size.

Where have all the flowers gone?

I can't answer Mr Seegar's question, but I can account for four of them.  Flower Class corvettes that is.
These are MY 1/1200 metal castings which, after a quick cleanup were treated to masts made (rather appropriately) from florists wire.  The usual drybrush over black paintwork was finished off with a squirt of spray varnish.

Last week's game was organised by Martin and used his 20mm WW1 toys and Peter Pig's Square Bashing rules.  I was typecast as the German commander, with my few troops thinly spread in the face of John and his vast numbers of French.  That's 1918 for you.
On adding up the scores, it was concluded that the game was a German tactical victory, as the French advanced would have been untenable.  I have to say that Square Bashing is not one of my favourites (too much factor counting and dice rolling) and so it is much to Martin's credit that he managed to provide John and I with an entertaining evening.
Posted by Tim Gow at 17:55 No comments:

Following recent email exchanges on the subject of 'modern' naval warfare with David Crook and Paul, I was inspired to dig out and begin painting some more 1/6000 scale ships. These join some 1/1200 WW1 & WW2 vessels on the modelling table. Evidently August is 'Ship Month.'  I will post photos of the completed ships as they 'commission.'  Perhaps a 'duffers guide' to ship painting might be in order.
Both David and Paul asked me about rules and I suggested the set by Peter Child-Dennis which I found some years ago on David Manley's website.  These have been revised since I last looked so I shall need to try them again soon.
The last outing of my 1/6000 ships was documented here but I remembered that I had some pics of an earlier game.  So here they are.  The game featured two of my fictional South American countries - their harbours filled by opportunist First and Second World arms salesmen.  The detail of the scenario escapes me but broadly a Castillian task force was fending off an attack by the Soviet-armed Basque fleet.   1/6000 ships and 1/1200 aircraft models by Hallmark.
Added 29/08/12:   'Fatman' on TMP has correctly identified the mystery bomber as a Junkers Ju290.
Posted by Tim Gow at 11:51 11 comments:


1. Favourite Wargaming period and why?
WW2.  It's where I came in (with Airfix toys in the '70s) and I keep returning to it.

5. Favourite book and author?  (let's make it a top 5)
To lose a battle by Alistair Horne;  Air War Games by Don Featherstone;  The Scottish Revolution by David Stevenson;  any of the James Bond series by Ian Fleming;  any Flashman by George MacDonald Fraser

6. Greatest General?  I managed to narrow it down to three.
Themistocles,  Montrose,  Zhukov

7. Favourite Wargames rules? (apart from my own!)
Command & Colours

8. Favourite Sport and team?
Don't really follow anything.
9. If you had a only use once time machine, when and where would you go?
Edinburgh, 1637

10. Last meal on Death Row?
I'm not convinced I'd be hungry.

11. Fantasy relationship and why?
I couldn't improve on reality.

12. If your life were a movie, who would play you?
A young Clint Eastwood (he copied my style anyway...)

14. Favourite Military quote?
A tie for first place between two American generals:
"You can never do too much reconnaissance." - George S Patton
"I have no confidence in any scout." - Robert E Lee
15. Historical destination to visit?
Paris
16. Biggest Wargaming regret?
Not stocking up on Airfix kits when they were £0.24 each!
17. Favourite Fantasy job?
Tartiflette taster in a French restaurant.

19. Favourite Wargaming Moment?
When clever and talented people like my games.

20. The miserable Git question, what upsets you?
Narrow-mindedness.
Posted by Tim Gow at 16:08 10 comments:

Lions and tigers and Temeraires*. Oh my! 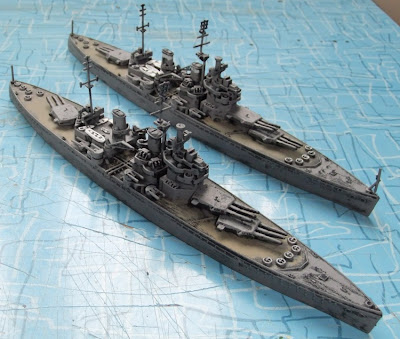 Recent additions to my 1/1200 scale fleet are these two battleships of the Lion class.  Six of these were planned, and the first two (Lion and Temeraire) laid down as a planned follow-up to the King George V class.  Unlike the KGVs, the Lions were to be armed with 16 inch guns in three triple turrets.  As the hull was basically a (very) slightly stretched KGV (the difference in length amounts to a fraction of a centimetre in 1/1200 scale), I simply made up the Revell kit from the box, less the main turrets.  Suitable turrets were sourced from a chap on ebay who produces a range of such items  - mostly as replacements for the old Tremo models.  The turret mounts had to be carved out a bit to enable to new turrets to fit.
An easy conversion then, to produce an only slightly fictional ship!  Or two. 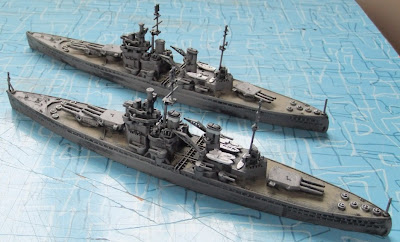 While on holiday on the Durham coast earlier this month we visited the North East Air Museum.  I discovered this gem on the internet and the fact that our hotel was only 20 munutes away made it something of a no-brainer as far as a visit was concerned.  The museum began life as the North East Air Museum and North East Land Museum which amalgamated and now share a site.  Located on the boundary of the old Sunderland Airport, the museum is next door to the Nissan car facrory which now occupies the rest of the airport site.
The aircraft collection consists mainly of postwar machines and their Meteor has the unusual distinction of having been the first jet fighter to travel through the Tyne Tunnel - albeit on the back of a lorry!
This post features photos of some of the aircraft - next will be some of the other exhibits. 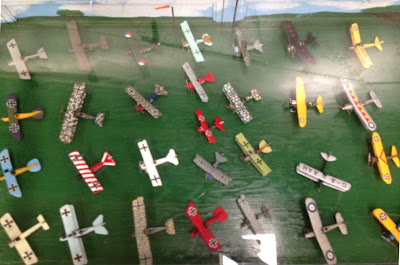