Guilt has finally got the better of me so here I am with more ramblings!

The (much needed) Christmas break allowed some game-related activity including a very jolly game of AK-47 with Nick Mitchell and Martin Rapier. Sadly my troops, already intimidated by Nick’s better painting, were finally overcome by his luckier dice rolling.

I finally managed to find the time to re-base a load of 15mm Napoleonic Saxons bought off Ebay some 18 months earlier. In truth it was such a large army (4 box files) that I had already sold off about 70% of it. The survivors of this purge (I wonder if it’ll make them fight any better) are now snug on their new flocked and magnabased stands in a single box file. 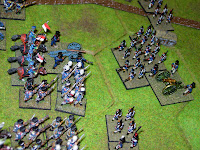 The above prompted me to have a play around with a Napoleonic game I’ve been pondering for some time now. It uses 15mm toys on (inevitably) my Hexon terrain. A division fills a hex. The rules are at an early stage of development but results so far are fairly promising. Aside from any other considerations, the toys look nice on the terrain! A chat with Martin Rapier at the Sheffield club last night produced some more ideas. Perhaps I should offer to run the game at this year’s COW – that would force me to develop it!

On the 6mm front, I have sent a load of photos of old and weird toys to Pat Callahan for his Micro Armour Mayhem site. I strongly recommend visiting this site – there is a lot to see!

I have also sorted out the toys for a further (Arctic Front) Motor Rifle Regiment (from the, er Cold War) for use in NBC games. This will be tooled up with MT-LBs and be used with my ‘winter’ Hexon tiles. Having spray-painted these toys in late December, I started the brushwork on Sunday. This consisted of painting tyres, tracks, canvas, and lights etc on the vehicles and weapons, boots, packs, flesh and helmets on the infantry - finishing with an oil wash. Monday night saw much drybrushing and cutting out of stands (artists’ mounting board). On Tuesday night I stuck the toys to the stands (with PVA). I now need to flock and edge the bases, varnish everything and add squares of magnetic strip (so I can use Megablitz SP markers). Photos will follow of the completed toys.
Next up will be more snowy Russians and NATO troops to fight them (it’s still 1985 in my games room…)
Posted by Tim Gow at 17:56 2 comments: