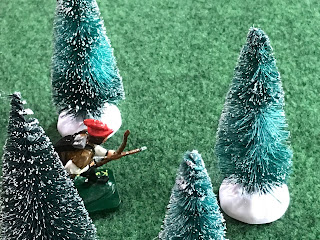 Meanwhile back in the middle ages....  As Russell skulks on the woods.... 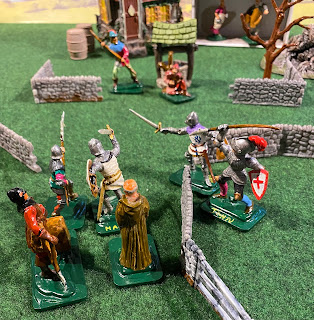 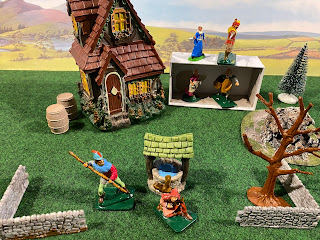 Outside the inn is Gaston, a handy-looking bloke with a staff and the inevitable lute player.  The white box I used to indicate who was in the inn - upstairs and down.  So Ye jolly Innkeeper and Doris the barmaid are in the bar while Robin and Lady E are upstairs.  In separate rooms, one trusts! 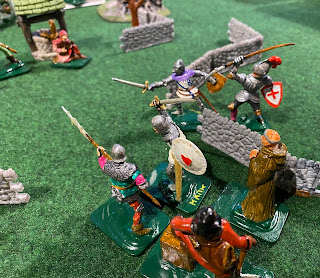 Gaston challenges the party as it approaches and on hearing Fred the bodyguard announce Lord John he moves aside. 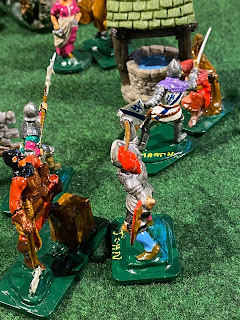 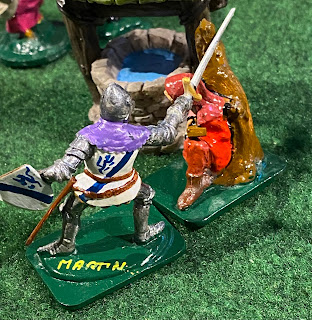 A combination of having read his objectives and an ear as tin as his helmet leads Sir Martin to kill the lute player.  He'll not be missed. 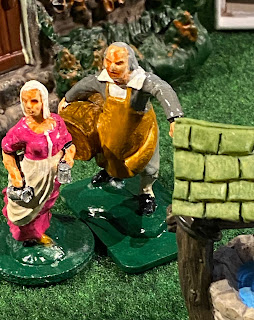 The innkeeper and Doris issue forth to offer refreshment, assuring Lord J that they didn't like the bloody lute music either. 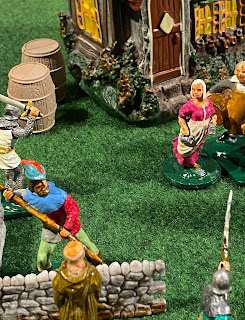 Friar Paul tries to engage Gaston in religious debate while Sir Mark sneaks toward the barrels of beer.  Or Doris. 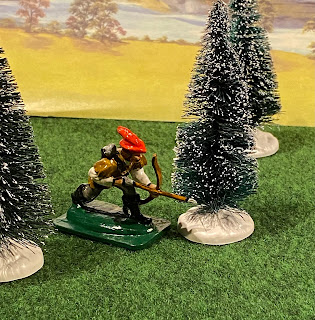 Russell skulking in a different wood. 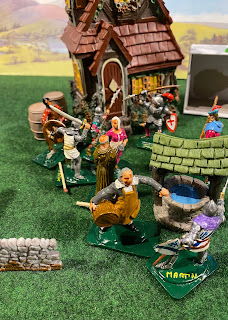 The drinks are soon flowing.  The innkeeper tries to persuade Sir Martin to pay while Friar Paul chats up Doris. 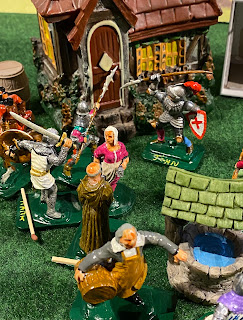 Lord John sends Fred indoors to search for the fugitives... 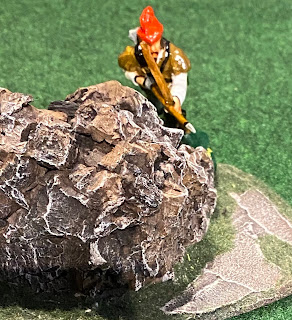 ...while Russell sneaks ever closer..... 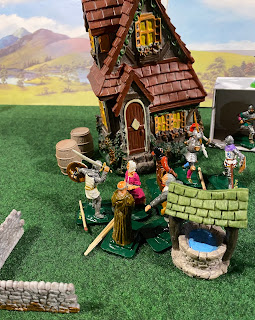 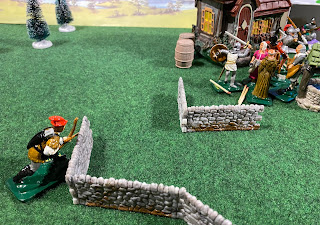 ...and closer.  Sir Mark disappears into a quiet corner with Doris. 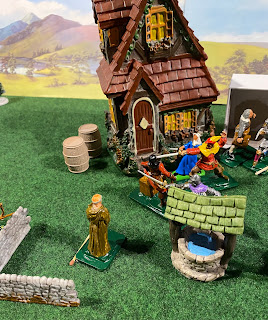 As Fred clatters up the stairs, Robin leaps dramatically from un upstairs window (actually Lady E pushed him) and then catches the lady when she too jumps!

This game followed on from this earlier outing to the Middle Ages.  Everyone was sent a general briefing:


Having had his rather fetching daughter snatched away by outlaws, an enraged Lord John has raised his surviving retainers to recover her and capture the Outlaw Robin Banks.  The pair have been traced to an inn on the edge of the forest.  In the later afternoon of a summer Saturday the Lord and his retainers approach the inn.

The lady – a blushing virgin (with, if the rumours are to be believed, much to blush about) - does not appear to have shown reluctance to run off.

The knights at least 12 inches from each other and from the inn.

Figures may not leave the playing area! 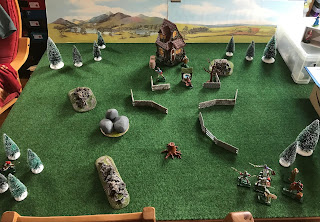 Ye Code of Chivalrie.  The lord will look unfavourably upon knights who break the code of chivalry.

A knight may not engage a non-knight in combat if another knight is closer.

A knight will not engage another knight who is currently in combat with another.  He won’t ‘gang up.’

Knights.  Knights have trained their entire lives for combat.  A knight cannot be put out of action until he receives three Wounds.  Treat any Out Of Action result on the Wound chart as a Wound instead.  Once he has sustained three Wounds, he’s Out Of Action.

If a knight is put out of action, his retainers will leave the field and take no further part in the action.

Lord John of Westbourne       a God-fearing gentleman, lord of Broomhall, Endcliffe and all ye lands as far East as ye inner ring road

Ye Buxon Serving Wench      makes up for the flat beer

Ensure the Lady Ermentrude is recovered. Kill Robin’ Banks.  Stay out of danger.

Recover The Lady Ermentrude.  Kill someone.  Get Lord John drunk

Project an air of menace.  Suck up to Lord John.  Get knighted.

Impress Lord John with a daring exploit.  Kill someone.  Pull the barmaid.

Keep The Lady Ermentrude in your er, ‘protection.’ Kill someone.  Do something daring and reckless.

Ply Lord John’s party with strong drink.  Make sure someone pays.  Defend the dubious virtue of the barmaid (or at least get paid!)

Pray several times during the game.  Get roaring drunk.  Seduce the barmaid.

Do something dramatic (so you get a role in the film), Kill someone.  Pull the barmaid.

Email ThisBlogThis!Share to TwitterShare to FacebookShare to Pinterest
Labels: 1/32, A Fistful Of Lead, Medieval

A Fistful of Fighting for the Farmstead 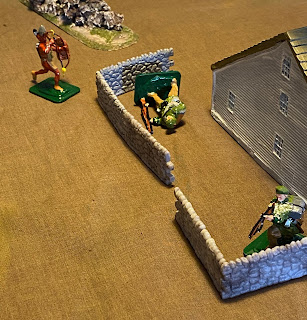 A few weeks ago I had another outdoor game planned.  Sadly we (Martin, Pete, Lloyd, Russell and I) were rained off  so we retreated indoors and I arranged some other games.  To start we played one of the scenarios in the Fistful of Lead book.  Some Indians (not a fashionable title, but I was brought up in the 1970s and that's what they were called in black & white movies) attacked a farmstead, little knowing that a few Rangers were overnighting there.  Figures were from my own accumulation of 54mm plastics. 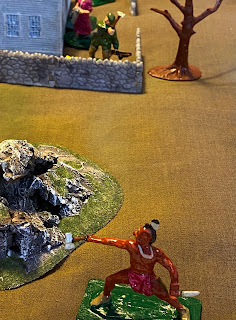 One of Martin's chaps runs from the woods to the rocks.... 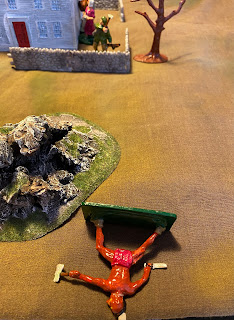 ...and learns the hard way of the dangers of mincing around in the open. 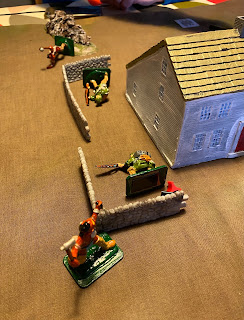 In the west both Rangers were soon down and the Indians rushed the walls. 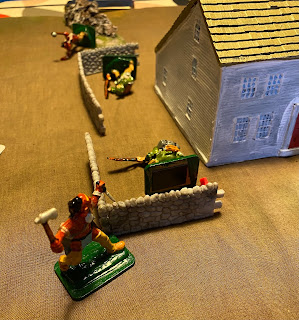 An axe and a knife - how very unsporting! 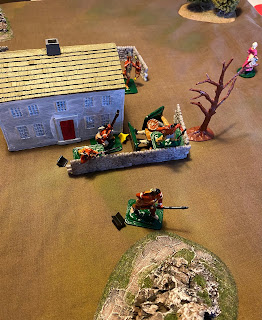 The farmer and his wife (actually the Replicants innkeeper and serving wench) were soon involved in a desperate hand to hand combat.  The Indians fought among themselves over the farmer's barrel of beer while Mrs Farmer belted one of the baddies with a pewter tankard and legged it with his tomahawk.  An excellent ending! 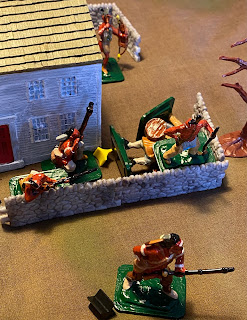 Email ThisBlogThis!Share to TwitterShare to FacebookShare to Pinterest
Labels: 1/32 scale, A Fistful Of Lead, Game reports 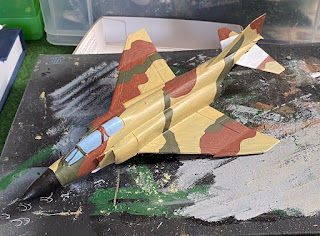 The dodgy Phantom now conceals it’s past under a new paint scheme. As some of you guessed, it is indeed destined for Iran. More photos when it has decals and varnish.
Posted by Tim Gow at 18:21 2 comments:

Sorry if you’re getting fed up of tatty aircraft models.  This specimen had quite lumpy paint and the stabilisers were canted up rather than down!  Never one to let a good - or bad - Phantom go to waste I set about scraping off the decals and the worst of the paint.  In the course of this less than gentle activity most of the remaining underwing stores fell off.  Ah well. 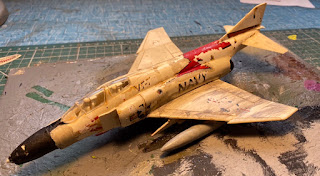 Next I slapped on some paint - pale grey underneath and sand up top. This transformed the thing from horrible to only mildly ghastly so having decided which Air Force would be the lucky beneficiary of my toil I pressed on with more paintwork.  Any guesses? 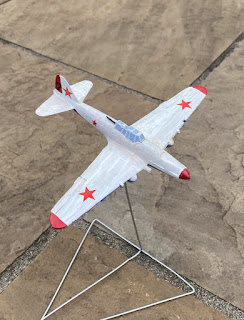 Here is the finished Sturmovik in all its lumpy ghastliness.  It’s definitely a 6-footer, from which distance it looks OK. In poor light. Anyway, it’s an almost-free Il-2 which can’t really be a bad thing.  Can it? 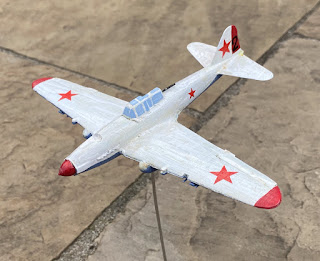 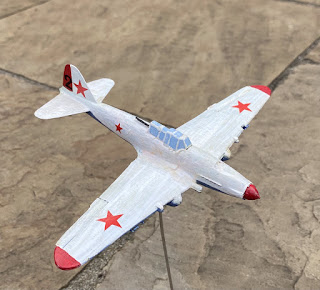