This was the same scenario as described in my earlier post.  This time I played the FJR Rgt 2 while Martin Rapier took command of Isthmus Force.  As willl become apparent the game took a very different course from my solo playtest.  The Germans adpoted the same landing plan as previously but found themselves under constant Bofors fire.  In the north this led to a very embarassing morale failure at which point the FJR were invested by the ANZAC battalion. 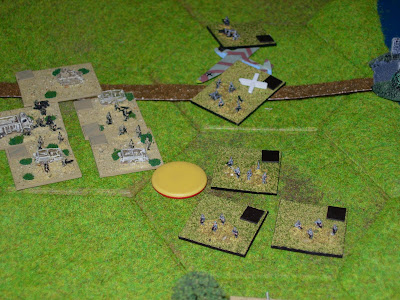 Soon this turned into an even more embarassing rout as the surviving FJR huddled round the end of the bridge. 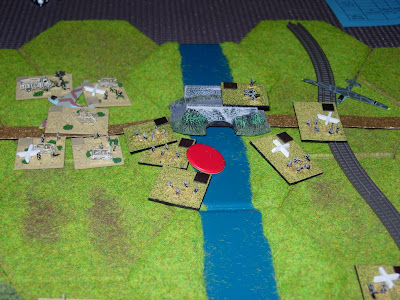 Meanwhile in the south the FJR infantry successfully overran the Bofors position while Col. Rapier frantically tried to unditch his HQ lorry. 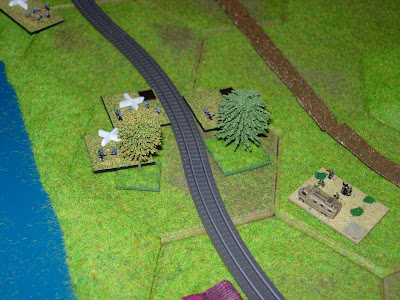 In the north, the ANZACs mopped up the paras but were themselves wiped out while trying to close assault the engineers on the bridge. The Allie's armoured might (a weak squadron of MkVI light tanks lays down harassing fire on the (very resilient) FJR engineers.
The NZ battalion arrives in the south and threatens the FJR weapons company.  The Greeks at last put in an appearance at the railway station.  Soon they and the FJR infantry fight each other to a standstill. 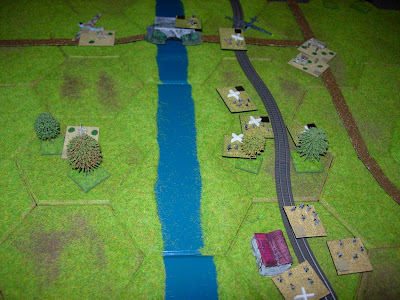 Endgame.  As turn 15 closes and German land forces close in from the north (just off table...), the engineers, by now the only surviving Germans, continue to hold out against the massed attacks of the tanks, carriers and New Zealanders.  The game ends as a draw but it's Iron Crosses all round for the plucky FJR Engineers. 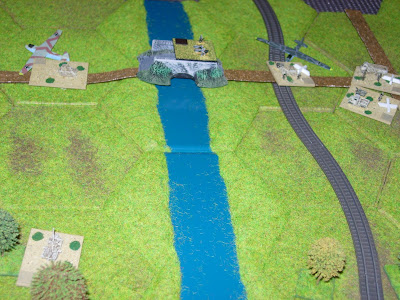 Set up after the Germans have plotted their drop zones. On board forces may be dug in. The Bofors guns are emplaced any do not have any transport. Only the Bofors may fire on turn 1.

Reinforcements are placed on the first hex in on the turn they arrive.

Allied forces must control or failing that, destroy the bridge. Surviving forces must attempt to escape to the south.

The Germans win if they achieve 2 out of three of the following:
1. Control both ends of the intact bridge.
2. Eliminate both AA batteries.
3. Eliminate all Allied forces.

Below - the situation at the end of turn 1.  The first paras have arrived safely and while the carriers trundle along the road the ANZACs dither.  Corinth is just off to the top left (south west) corner of the photo. 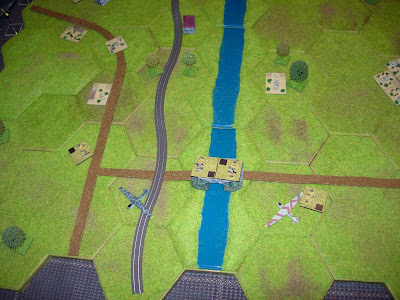 The mighty carriers advance.  All toys by Heroics & Ros except the MkVI tanks, which are GHQ. 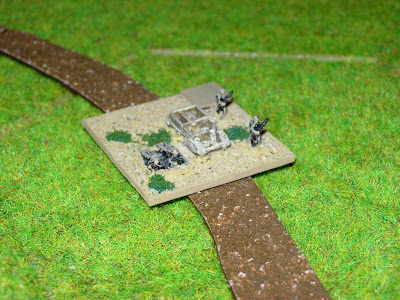 As the Allied troops start to gather, the Fallschirmjager (FJR hereafter) in the south overrun the Bofors battery. 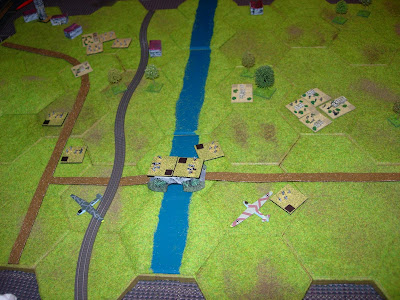 At the end of turn 2 a mysterious (but entirely historical) event occurred.  A stray shell from a Bofors ignited the charges which the efficient glider engineers had removed and piled neatly beside the bridge...  Some of the engineers paid the ultimate price. 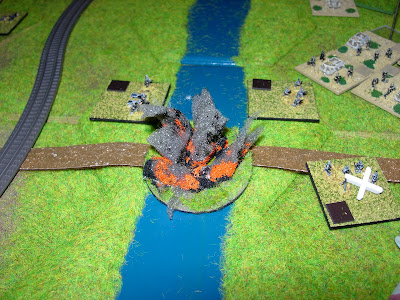 As more FJR land on both sides of the canal, some of those in the north suffer casualties on landing. As the ANZACs advance Stukas swoop out of a previously empty sky.  While the bombing causes no casualties the Stukas live up to their reputation as morale-busters.  ANZAC will wavers (the yellow marker). 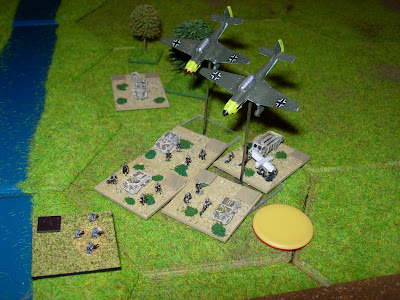 The same scene from a different angle.  Under the unforgiving camera flash my Stukas look very scruffy but their service life stands at 20 years and counting. 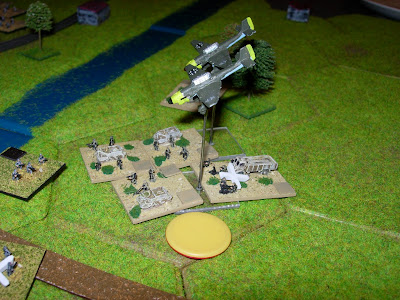 In the south the Greeks were also targeted by Stukas.  Again there are no losses but morale snaps.  The FJR then close assault the hex containing not only the Greeks but also the surviving carriers and Isthmus Force HQ.  The FJR suffer 2 hits but dish out 4. 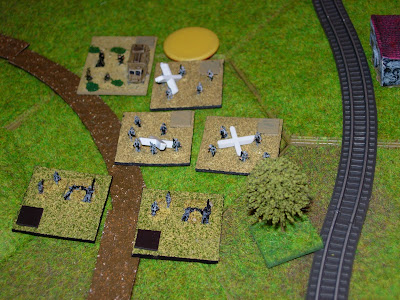 Back in the north the ANZACs rout to the perceived safety of the Bofors battery. 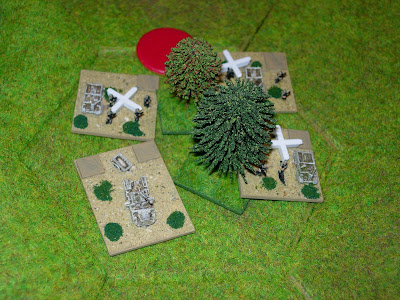 In the south the FJR have now seen off the Greeks and overrun the HQ.  The NZ 'Battalion' finally arrives on the hill but is shot up as it dismounts. 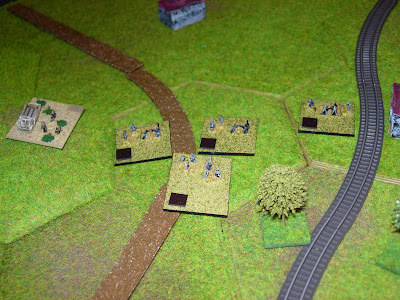 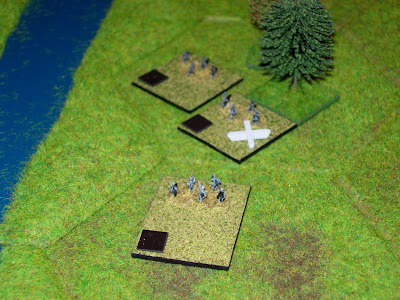 A full report of this game (played at the Sheffield Club on 20/01/2010) has already been posted by Martin Rapier on his blog (The Games We Play), so I'll try not to duplicate his efforts. Suffice it to say that the game was part of our continuing efforts to find the 'Holy Grail' of a playable WW1 Div/Corps level game. I think it worked.

Again we had 3 divisions - from left to right British (me), British (Jerry Elsmore) and French (John Armatys). My photos concentrate on my division (which was the most successful...)

Below we see my troops (accompanied by some of those new-fangled tank things) overrunning the German front line. Before anyone asks, the tank is indeed the old Airfix faithful (I have three of them). 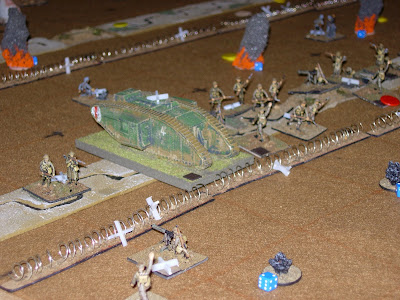 Next we see my follow-up brigades about to brave no-mans land (and the German barrage). Nice to see another appearance from my 'Harry Tate' (RE-8) on the look-out for Jerry guns. 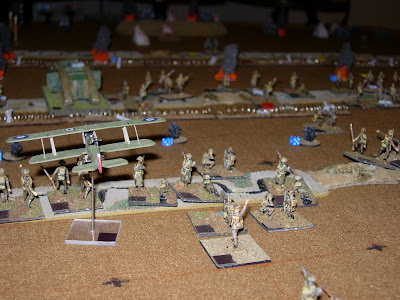 Towards the end of the game now, and my chaps are overrunning the Jerry communication trenches. We could have had a go at the second line but, well, orders are orders. 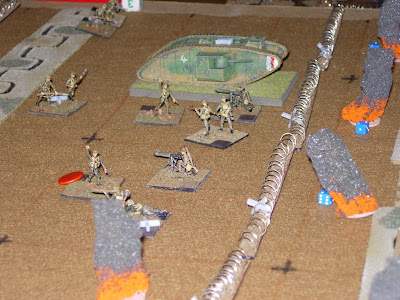 The same scene from a different angle (the RE-8 perhaps?) I wonder what will change in 1917... 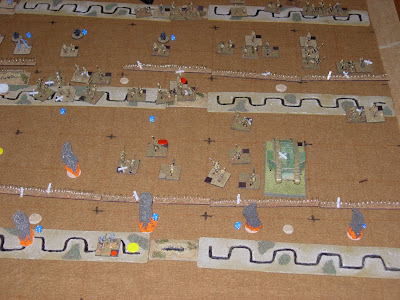 My Kingdom for a halftrack

Following Bob Cordery's recent blog comments about the Ian McKellen version of Richard III (set in the 1930s), I was remembered that I have seen and taken photos of some of the AFVs used in the filming. The vehicles formed part of the Budge Collection whose Retford base hosted a MAFVA event in the mid-1990s. Sadly, few of my photos seem to have survived but they include a vehicle which was definitely in the film.
Below: Not a German Sdkfz-251 but an ex-Czech Army OT-810 APC. This still bears the markings it wore in the film. 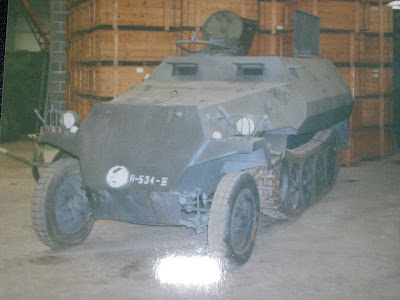 The interior of the OT, looking in through the rear doors. Having subsequently sat in a BMP it looks positively spacious! 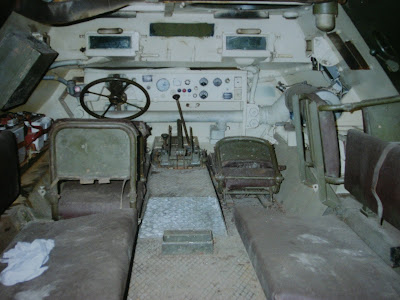 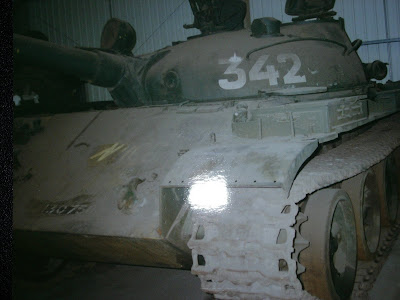 A rebuilt T-34/85. Despite the Russian script this too may be ex-Polish as I recall Budge bought 10 of them (maybe there was a deal if you bought them by the company) which arrived complete with all the external MGs swathed in grease but fully functional in the 10th tank. 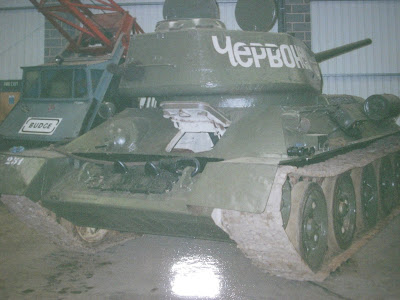 Finally, the only other photo I could locate was of this AMX-13 light tank. 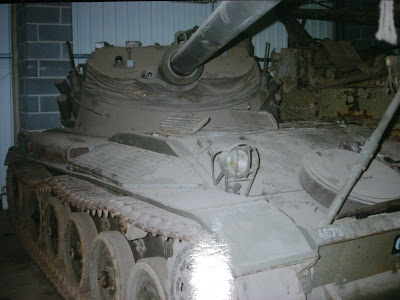 The only purchase I recall making at this event was an unissued East German steel helmet - the first, as it turned out, of many military silly hats.

To give you an idea of how quickly the snow fell, the following photo was taken only about 48 hours after my previous post. I finally dug out my car on Thursday. The hardest part was pulling the doors open... 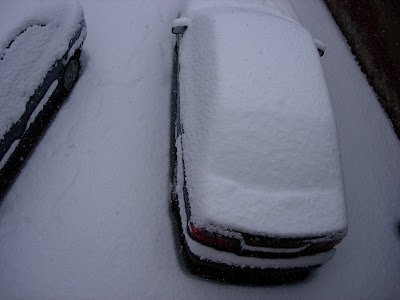 The construction of a snowman inevitably took place, complete with Bundeswehr surplus beret and cool shades. He has been named 'Gunter' on account of his passing resemblance to one of my airsofting friends. 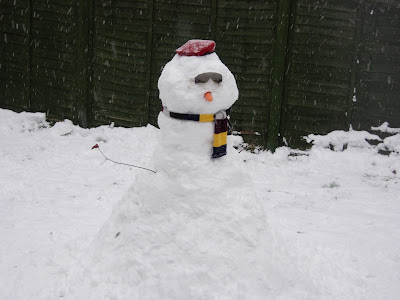 So far 2010 hasn't produced any gaming activity and today I'm back at work! More snow fell here over the weekend but happily I've not had to travel anywhere. 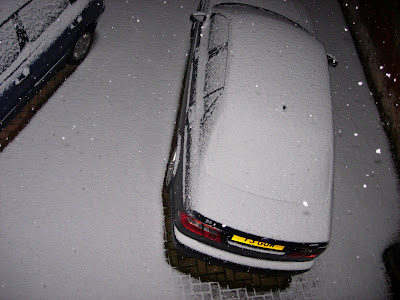 I justify the inclusion of this photo as it was taken from the window of my wargames room!

Over the weekend I did some work on a silly game involving motorised 20mm scale tanks. Not for the first time the acquisition of some silly new toys is driving (literally) the development of a game. I'll post some pics when we've had a proper playtest.

I think the big news so far this year is the list of new (and re-)releases from Airfix: www.airfix.com/new-for-2010/

These include 2 versions of the Bedford QL (QLD & QLT) which appear to be developments of the QL in the Refuelling Set - finally Airfix makes the conversion the rest of us have been knocking out for 30+ years! Very welcome though. Nice to see that the prices of some kits includes a donation to 'Help for Heroes'.