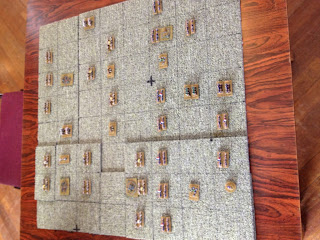 This game was run by Martin using some of his 6mm toys.   John led the decadent Austrians while I commanded the forward-looking French.  Above is an overview of the opening positions.  The table is about 60cmx60cm.

This Funny Little Wars game was played at the Sheffield club last month.  Martin and I officiated while Lloyd and Steve commanded their own armies, aided and abetted by other club members.  I have captioned the photos as well as my memory allows.  Above are some of Lloyd's lancers seeking glory.  Or death. 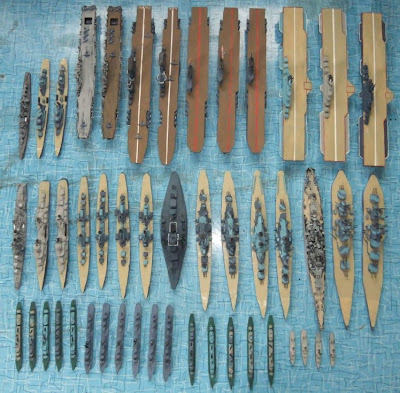 Now composed mostly of balsa scratchbuilds by John Hawes, my 1/1200 US fleet now runs to 48 vessels in all.  The Revell kits of New Jersey and a pair of carriers were built by me but the US destroyers I have previously amassed (see my earlier post) have now been passed to Ian Drury.
Posted by Tim Gow at 15:55 14 comments:

During my recent holiday in Budapest I managed to get through three books.  The first was a bit obvious and has been on my 'to read' list for some time:
It is difficult not to feel a degree of sympathy for the position in which Hungary found herself in the 1940s.  This volume covers the siege of Budapest, together with other aspects of the war in as far as they impacted on the main story.  Although I was familiar with the 'broad sweep' of the campaign, Ungvary's text has added considerably to my knowledge.  Of particular interest to me were the many maps - especially the one which revealed the front line on 17 January 1945 to have been only a couple of blocks away from my hotel!  Recommended reading.
Next up was one of those impulse purchases from Amazon:
Written by a journalist, this book chronicles the Soviet involvement in Afghanistan from before the military deployment and is based on interviews with many of those involved.  A very readable account of a complex situation.
As well as actual history I read a fair bit of historical fiction and so I was interested to see this book (promising to be the first in a series) set during the English Civil War of the 1640s.
Sadly I didn't care for it. It follows the well-trodden path of maverick hero who is both disaster prone and implausibly lucky, complete with pantomime villains (and heroine) in the background. I gather that the second book of the series is now in print and would be interested in the views of anyone who has read either of them.
I have another holiday coming up, so plenty more book to read!
Posted by Tim Gow at 18:00 6 comments: 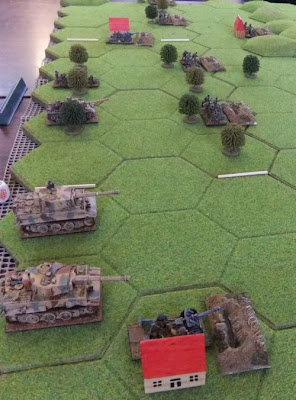 This was a game run by Martin using the Memoir 44 game system and his 15mm toys.  Typecasting applied, so pipe-smoking John led the Brits while I was the dodgy character replete with highly polished jackboots and duelling scar. 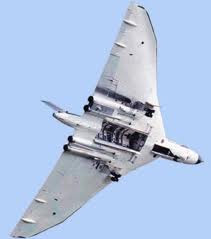 I mentioned this game in my earlier post on COW and indicated that there was more still to come.  Here it is.  The game began (like so many others before it...) as a daft chat at the Sheffield club.  I will take this opportunity to shift some of the blame to my co-designer Martin Rapier.
The, er, 'concept' was to simulate the challenges of:
1. Getting a 1960s nuclear bomber to it's target unscathed (getting home and indeed the issue of whether there would be a home to return to is a different issue.  And possibly a further game...)
2. Detecting and intercepting a bomber in the days before reliable surface to air missiles.
Above is one of the protagonists - nearly as good as my own Vulcan - and below the enemy. 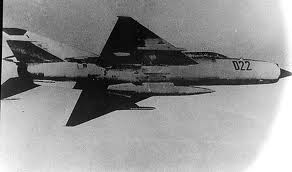 Regular readers may recall the construction of my MIG-21s a few months ago.  Getting the toy aircraft together was the easy part!
The game was to involve the Vulcan with it's crew of three (pilot, navigator, flight engineer) moving along an umpire-determined route between various landmarks on the Knuston lawn.  These were given clever code names such as 'Big Tree', 'White Chair', 'Duck Pond' and 'Summerhouse'.  The final landmark was of course the target.  The RAF navigator was given the route.
There then followed the construction of a replica 1960s Soviet radar set.  For this I used the glass from a car wing mirror (Saab 9-5 if it's of any interest - aircraft heritage you see?) taped to the handle of a floor mop.  The Operator faced the building and could only 'look' at stuff using the mirror.  He then passed the information to the Ground Controller (call sign 'Big Ears') who had a radio link to the Fighter Controller ( whose call sign was inevitably 'Noddy') located out of sight deep in the building.  The FC had a radio link (on a different channel) to a pair of fighter pilots ('Green 61' and 'Red 66').  These could only be directed with reference to the landmarks.


The first sortie ended with a successful interception of the Vulcan as it made it's final approach.  Exciting stuff! 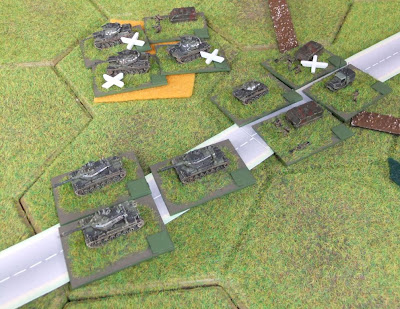 We join the action again as Will has managed to line up a very intimidating quantity of tanks - 7 companies and infantry - 3 companies near the Indian central position.  Help!

Although I had run this scenario several times before, the most recent was about 5 years ago so I had no clear memory of what had happened in those earlier games (I'll look for photos).  Will took to the game with some enthusiasm and proved to be a worthy opponent.  He is welcome back any time!
Finally, I should point out that the scenario was adapted from the one on Bob MacKenzie's website.
Posted by Tim Gow at 16:11 8 comments: