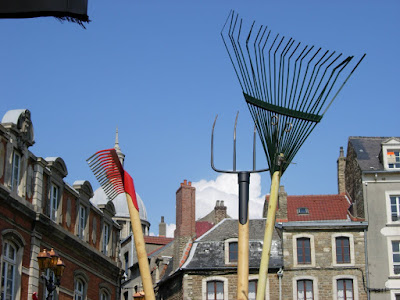 Well, actually I was there some weeks ago but as previously mentioned I have had a lot on since my return.  Any guesses about the photo above?

We only had time for a short holiday so we caught the 11am sailing from Dover to Bolougne on Monday 2 August, and returned on Friday 6. 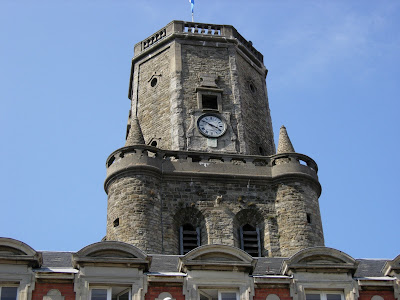 On arrival on Monday we spent most of the day strolling round the older parts of Bolougne.  I had previously only passed through in going from and to the ferry port, except for my first visit in (I think) 1990 as part of a 'conference'.  Memories of that visit are somewhat hazy as my colleagues and I (led by a senior - ie - with a larger expense account than me - manager) hit the first bar we came to and stayed until it was dark.  I obviously cannot disclose the name of the company I worked for at the time but it was a large insurance company with it's head office in Norwich...
On Tuesday we drove the 30-ish km south to Le Toquet.  For the first half of the twentieth century this was a very prestigious destination and still has a very well to do feel about it.  Lest any readers mistake me for a lottery winner I should point out that we were staying in the Ibis Hotel!  Still, this was hardly slumming it, as the view from our hotel room window will confirm: 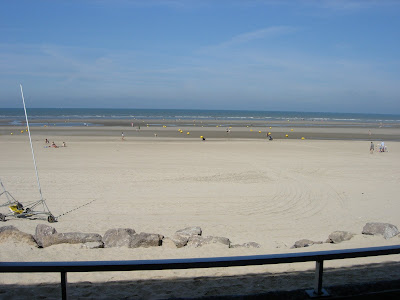 I can recommend a visit to Le Toquet for those of you who enjoy a nice stroll on the beach or on quiet streets, followed by a pleasant meal.  Among the many small shops in the town was one which sold only Lego and Playmobil toys.  Oh to be a child again!  Most bewildering, though, was a small chocolatier which also turned out to be an ice cream parlour and  - wait for it - a games shop!  Mostly family boardgames but also some 15mm toys.  When we passed by later that evening (c9pm) the guy from the shop was demonstrating a game using 15mm Napoleonic toys on a hex terrain.  On a small table in the middle of the street!
On Thursday we set off from Le Toquet to visit the battlefield at Azincourt.  When we had planned the holiday a couple of months previously, I had looked over a map to identify an interesting (ie military history themed) outing.  Leaving aside the 'obvious' fortifications, battlefields and cemeteries form the world wars, my eyes strayed inland and lit upon Azincourt.  Apparently this isn't a typo, but the original English recording of the name as 'Agincourt' is.  By coincidence (or fate?) I had picked up a copy of Juliet Barker's book 'Agincourt' earlier in the year. 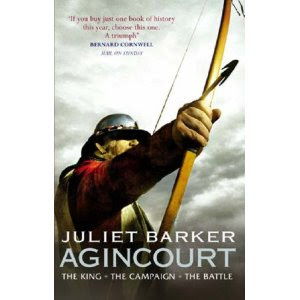 https://www.amazon.co.uk/Agincourt-Campaign-Battle-Juliet-Barker/dp/034911918X/ref=sr_1_1?s=books&ie=UTF8&qid=1283078706&sr=1-1
It was, I freely admit, an impulse purchase as this really isn't my period.  Having now read it, I can recommend this book to anyone with even a passing interest in history.  I finished reading it the day before we set off to explore the battlefield.
A slight navigational error meant that we missed the turning I had intended to take and instead ended up following the route taken by Henry V for the last few miles (a bit more quickly given his steed's one horsepower to my 250).  My reading had indicated that the English were very concerned about the final river crossing they made before the battle.  On a map the Ternoise looks a very minor obstacle, but crossing it now (albeit with the luxury of a bridge rather than a ford)  one winds down through the village of Blangy and then up a surprisingly steep hill.  Given that then French army had been reported only 3 miles away, I can well understand Henry's anxiety.
Cresting the ridge, we arrived at the crossroads below and turned left on to the D71 which pretty well marks the original English line. 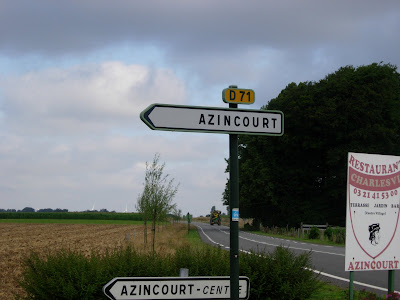 Although many features in the locality have changed, the field itself remains  - tapering slightly (due to the surrounding woodland) towards the English line and surfaced with thick, heavy mud.  Even on the fine day I visited it retained a lot of moisture (on the eve of the battle it had rained heavily) and I'd not have wanted to walk across it in ordinary clothes, let alone in full armour and carrying a shield and a bloody great axe. 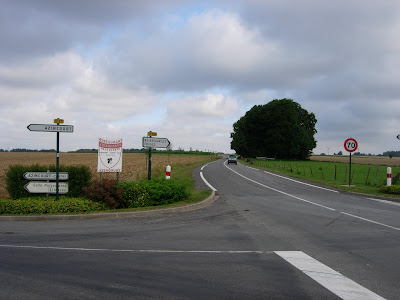 The visitor centre in Azincourt village is worth a look, although the animated slideshow displays seemed to me to be astonishingly pro-English.  There is lots of armour and pointy things (did I mention it's not my period?) on display, along with a rather splendid 6x6 foot diorama made using 20mm toy soldiers.
Thursday night was spent back in Bolougne and then it was back to Blighty on the 9am Friday ferry.
Posted by Tim Gow at 12:59 2 comments:

Yes, I'm still here.  I realise it's been a good while since my last posting - due to holidays, work etc.

As much to commit myself to writing them, here are the subjects I will cover in my next few posts:

1. My holiday in France - including a visit to the battlefield at Azincourt.

4. Photos of toys originally made by the late John G Robertson.