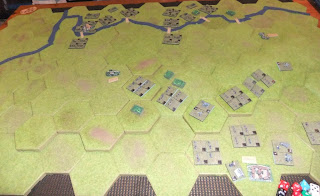 I played thought this Op14 game over the course of several evenings.  The total playing time was probably about two hours.  The photo above shows the initial setup - north (and the Germans) are to the top.
The scenario saw two German corps from Bulow's 2 Army attempting to push aside the unsupported (or so they thought!) French X Corps.  The French - actually amounting to two corps - were heading west, the head of the column being just short of Sains (just to the left of centre on the photo).  Part of a further French corps was on the western edge of the table.
I hope to run this game again - with real players - next month.
Posted by Tim Gow at 22:50 6 comments:

Putting together the recent series of posts on my 1990/91 Gulf War toys prompted me to search for photos of of games involving them.  Of the three scenarios I have run (Jahra, Khafji and Kuwait Airport), I only have pictures of the first, which I suppose gives me an excuse to do the others again...

On to Jahra.  I ran this game at least twice - in January 2007 - with my own NATO Brigade Commander rules and then-new Hexon terrain.  I'll let the photos and captions tell the story, which opens as the invading Iraqi forces trundle into Kuwait along the major road which bypassed the town of Jahra.

The magic number of 100,000 page views was achieved during (in UK time) the night of 24/25 February 2012.  This means that on average each post has been viewed more than 200 times!  Coming so soon after attracting 100 followers  this is very encouraging.  I again thank all of you who take the time to look at my blog - it is, as I said in my New Year Message, an integral part of my wargaming world.

My Kuwaiti brigade was built for a specific game nearly six years ago.  Photos of the actual game will follow soon (as I have recently rediscovered them!), but for the moment here are some rather better photos of the toys.
Posted by Tim Gow at 12:00 4 comments: