Surely one of the least flattering (especially in certain of the colonies) of NATO codenames* was that given to the MiG-15.  Famously powered by a Rolls-Royce Nene engine (given to the Sovs by a gormless Labour government), it remains a classic design and remained in service with a number of states well into the 1980s.
This pair are 1/300 models by Heroics and Ros and are finished in Egyptian markings.

* see http://www.ipms-gateway.com/articles/NATOSovietNames.htm for more.  And to think it was originally 'Falcon'.....
Posted by Tim Gow at 17:24 8 comments: 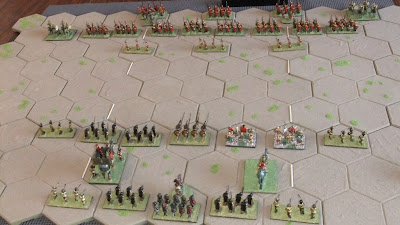 *Depending on which accounts you read it may have been 261 or 262BC.
This game - played using Command & Colours - saw a Carthaginian force under Hanno (Martin R) appearing in Sicily to help repel the Roman invasion.  Most of the Roman army under Megellus (John A) had left off besieging a smaller force under Hannibal (no, not that one) to engage and defeat Hanno's army.  The initial setup can be seen from behind the Cathaginian lines above.  All toys from my collection of 'classic' 25mm except for some barbarians brought along by Martin.

Coming next - cavalry action on the flank.
Posted by Tim Gow at 13:28 No comments:

It is, in my experience, generally a mistake to go to a wargames show without a shopping list.  With a list, there is a fair chance that most of the weekend's defence budget will be spent on stuff I knew I wanted.  Without such a 'plan', anything can happen!

My list for this year amounted to some additional bits of Hexon terrain and er, that was about it.  I had even pre-ordered and paid for the Hexon.  What could go wrong?  Well quite a bit actually.  Things started quite gently with some useful looking 54mm figures from a trader's rummage box. 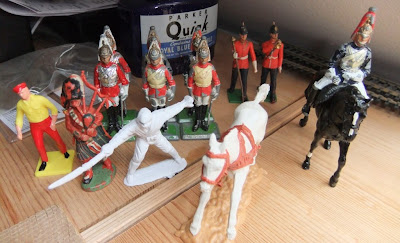 Along with the Britains Horse Guards and bandsmen, the rather camp mechanic (in the fetching yellow & red outfit), I picked out the rather dodgy Ninja as a possible assassin figure.
On then to the Bring & Buy at which point the slippery slope became much steeper. The stall was awash with old 25mm ancients - most quite decently painted and temptingly cheap.  Negotiations were begun and I eventually emerged with a rather splendid Sassanid army with a few additional bits: 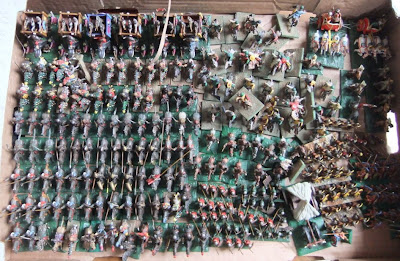 I already have plans for the Sassanids (and indeed had previously planned building such a force) so maybe it wasn't too ridiculous a purchase.  In fact this army falls into a poor second place in the list of silly purchases.  The number one spot was won, by a considerable margin, by the box of Chinese chariots.  Help me. 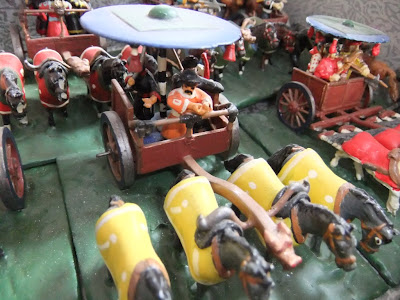 Letting Le Cateau out of the bag

Le Cateau, 1914 was played using Richard Brooks' Op14 rules and was run by Martin using his 15mm toys (and my aeroplanes).  Martin has very kindly made available the briefings which I reproduce in part below.  He ran the BEF while I donned the Von Kluck's spiky helmet.

After the battle of on 23rd August the BEF fell back with Von Klucks 1st Army in hot pursuit. On the 25th the BEF was forced to split its march around the on the Sambre. Von Kluck's advance guards fought a series of actions with BEF rearguards but the exhausted British could retreat no further and decided to stand and fight.
British briefing (IInd Corps)
The Corps has suffered permanent losses of around 4,500 and Germans losses are estimated to be much heavier. The men are exhausted and we need to halt the Germans in battle before we resume the retreat. Contact has been made with the French on the left and Haigs 1st Corps should be on the right on the other side of the Sambre.
Allenby's cavalry are also exhausted but have agreed to serve under command, as has the newly arrived 4th Div. 4th Div has no signallers, engineers, cyclists or cavalry. The Corps is deployed along the , with a refused left flank and a brigade plus cavalry on the far side of the Selle trying to locate Haig. The decision to stand and fight was not taken until 4am at it took hours to distribute the orders.
Conduct a 'stopping blow under cover of which you can retire late'.


Cavalry Div (Allenby)
French Cavalry Div. Not under command but defends itself if attacked.
German briefing (1st Army)
We have been closely pursuing the British for three days and they finally seem to have stopped to fight. Losses so far have been around 16,000 and the main tactical lesson has been the need for a preparatory bombardment before infantry assaults.
Von der Marwitzs IInd Cavalry Corps has been recalled to Cambrai and the plan is simple, a double envelopment. IV Corps will pin the British frontally, while IInd Cavalry Corps plus IV Reserve Corps envelop their right and the III Corps envelops their left. III Corps won a bridgehead across the Sambre last night, but IV Reserve Corps will take a few hours to move into position.
Envelop and destroy the British.


Terrain and weather
The terrain is  rolling and open west of the Sambre, the major features are the (fordable) rivers, of and city of . Bridges for artillery at towns or as marked. The weather will be hot and sunny, but at dawn there is a thick mist which obscures observation.

The main ‘business’ of the weekend for me was running this year’s Wargame Developments game Rollbahn Ost.  The WD team – John A, Martin R, Jerry E, Nick M and myself – ran the game at least 17 times, with three players each time.
I designed RBO as a ‘one off’ game, as I’d noticed that the 70th anniversary of Operation Barbarossa (22 June 2011) fell on a Wednesday – the night the club meets.
We played it a couple of times on that date, and it was suggested that I take the game to Wargame Developments’ Conference of Wargamers last July.  I did so, and having planned to run it two or possibly three times, ended up running it no fewer than eight times!  As we needed a ‘show’ game for Triples and The Other Partizan this year, I redesigned the game to make it more presentable.
At Triples RBO was very well received and we had a lot of nice comments from players – several of them other game designers.
The game ‘rules’ will appear in full in a forthcoming issue of Nugget – the journal of Wargame Developments. 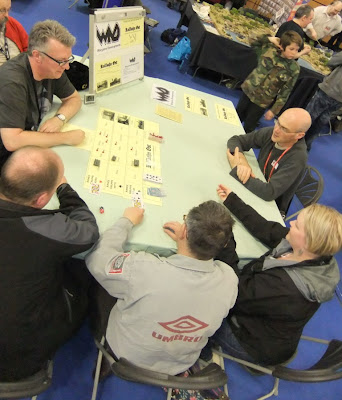 A burst of activity early last week led to the completion of the Typhoon.  The colour scheme was sufficiently striking that I have gone for a ‘clean’ look and not bothered with any weathering.  Red spinner aside (it should really be black…) the model is finished as one of three Typhoons which was tested in by 451 Squadron RAAF.  The roundels and tail flashes are from the kit, while the serial (EJ906) was pieced together from three different sheets in the decal box.  See more at http://adf-serials.com/research/Typhoon.pdf and http://www.cbrnp.com/profiles/quarter2/typhoons-1.htm 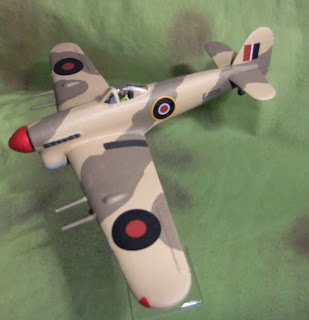 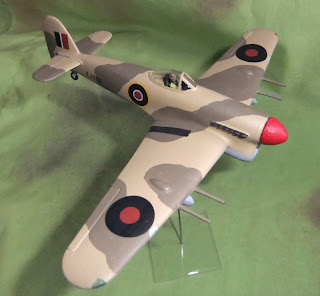 My model features a number of glaring errors, including the tailwheel (it should be recessed) and the bomb racks (not as far as I can tell fitted to the RAAF Tiffies), but despite having committed such heinous crimes against modelling accuracy I’m still able to sleep at night. 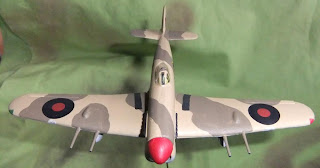 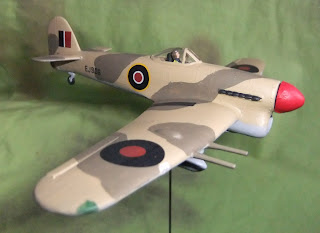 I really rather enjoyed trying to complete this kit to an decent standard so I may well tackle another model in this scale soon.  After I sort out the 25mm Sassanid army I picked up at Triples.  And the FLW British.  And refurb the 1/1200 fleet.  And…..well you get the idea.
Posted by Tim Gow at 08:25 19 comments:

Just recovering from a busy weekend at Triples!  After popping in on Friday afternoon to help (not very much )with the setup, I was there again at 0720 on Saturday and 0820 on Sunday.
As we had decent numbers in the WD crew (our game only requires a single ‘umpire’), I took the time to have a wander round the other games and chatted to a number of presenters.  There were a number of interesting and visually impressive games present – all of which had clearly involved expenditure on toys of rather more than the £10 required by Rollbahn Ost!  Below are my photos of a few of the games present - my apologies if the captions are inadequate (or wrong!).
Some time was also spent shopping, and a number of bargains were secured!  More on these in a further post.