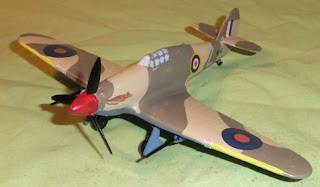 Like winter itself, my Winter Aircraft Project continues.  This Airfix Hurricane IID had been built (by a previous owner) down to the same standard as the other kits already mentioned but as it was in one piece little remedial work was required.
Despite having owned many Hurricanes (in various scales) over the years, this is my first Mk IID.  Given that it consists basically of half a troop of 40mm Bofors guns bolted to a basic Hurricane it is an irresistible combination! 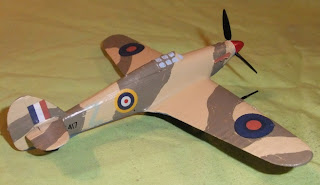 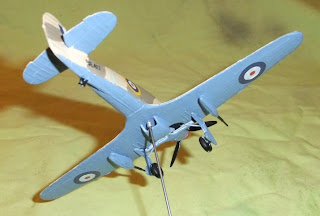 Getting to the point - Megablitz Strength Point Markers 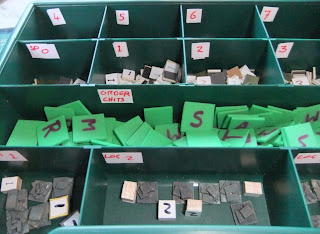 Following on from my post on the basing of toys for Megablitz, I now present some photos of my Strength Point ('SP' hereafter) and other markers.  Above is one of the plastic compartmentalised boxes I use for these things.  It contains SP markers, LOG markers and order chits.  I have four such boxes - a number which has seen us through even the largest (20+ player) games.

Above: an example SP marker.  I make these from artists mounting board to which I stick steel paper, sliced into 1x1cm squares. 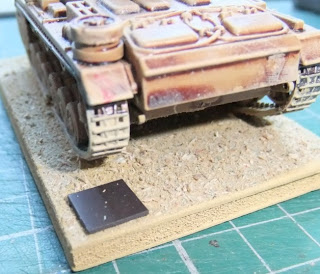 Each stand - in this case a tank battalion of 21PD - has a small square of magnetic material at the rear left of the base to hold the SP marker.  The latter, being faced with steel paper, adheres to the stand face down.  This prevents the enemy from knowing the strength of a unit. 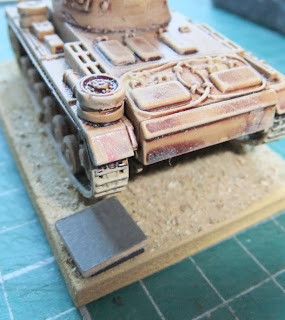 The SP marker in place.  If I could be bothered I'd make sure that the colour of the markers matched the stands.  But who has time for that? 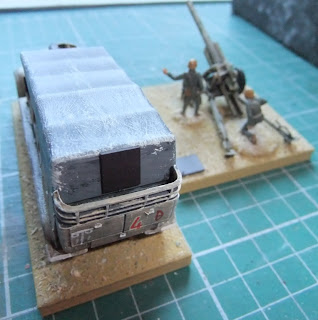 Logistic stands and artillery limbers don't have SP but carry instead LOG (or POL) markers.  These should be mounted in a position different to the usual SP location.  This Sdkfz 7 of 164 Le Div's artillery regiment has the mount on the back of the roof.  This is something else which can annoy 'proper' gamers.... 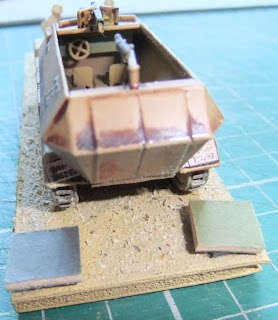 Engineer and AA stands have SP and an additional mount for Engineer Points or AA points (EP, AA).  Examples are this German armoured engineer battalion (above)... 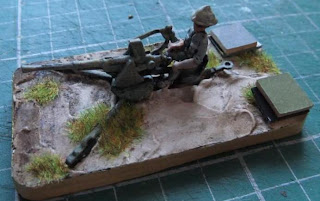 ...and this terrifying Italian AA unit. 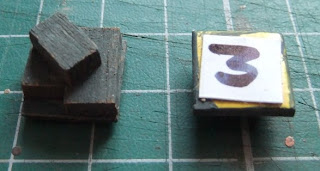 LOG markers are made in much the same way.  Mine are old boardgame counters (so slightly bigger than 1x1cm) topped with 'boxes' made of scrap balsa. 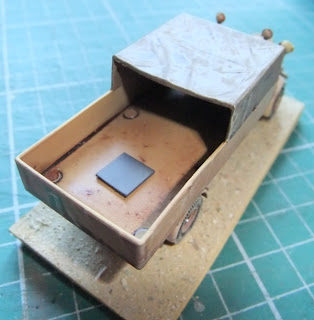 A German lorry showing the positioning of it's LOG marker mount.  Since someone will ask (probably someone called Paul), it's a ROCO Mercedes which began life as a fire engine.

And finally.  The order chits.  My original 'temporary' cardboard set lasted nearly a decade before being replaced by these wonders.  They are made from a foam-type material sold by the bundle by Hobbycraft.  They've done nearly a decade already.  For those unaccountably unfamiliar with Megablitz the five order types are 'Static, Mobile, Attack, Retreat and Transit.'
And so, to Don M who asked for this explanation I must say "Did this help any?"
Posted by Tim Gow at 15:20 15 comments: 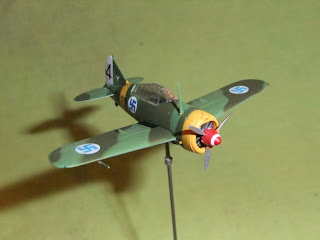 Hot on the heels of its relatives is this delightful 1/144 Buffalo (actually a Brewster 339) in Finnish colours.  Once again this is a Japanese pre-painted 'Gashapon' kit, so my input was limited to assembly and additional decals.  I love it. 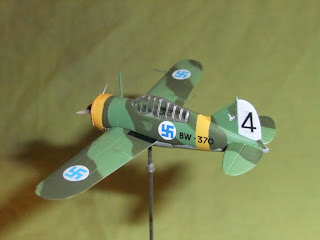 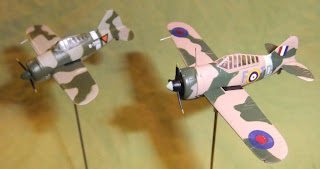 More progress has been made with the latest batch of 1/144 scale pre-painted kits. (see http://megablitzandmore.blogspot.co.uk/2013/02/yet-more-in-144.html)
This pair of Brewster 339s (yes, OK Buffalos) has rolled off the production line and been test flown over the games table.  The one nearest the camera is clearly an RAF machine - the other belongs to the Dutch (Far East) Air Force.
Another Buffalo will be along shortly - stay tuned Mr Beat!
Posted by Tim Gow at 18:40 2 comments:

It remains only for me to thank David and Julian again for such a splendid day out.  Let's do it again soon chaps! 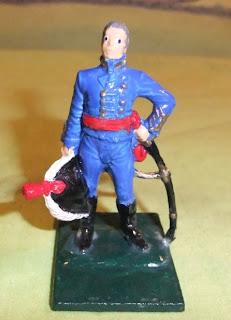 My Funny Little Wars Naval Brigade now has a new CO in the shape of this rather snappily attired chap.
He actually began life in the Italeri Napoleonic command set - hence his rather retro outfit.
His rather mad staring eyes may be explained by the rather tight looking trousers...

I have been trying to think of a name for my British-style fictional country.  The best I've come up with so far is The Empire of Anglophobia.    Any other thoughts?
Posted by Tim Gow at 17:13 14 comments: 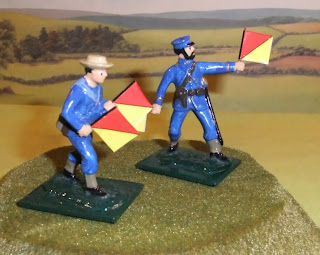 My Funny Little Wars naval brigade now has improved internal communications.  No broadband or 3G mobiles for these Edwardian-era chaps though, but the very latest in flag waving technology!
All four have been converted from the Armies in Plastic naval brigade figures.  The officer was already in a good pose and simply required his pistol/binoculars to be carved away.  The others began life as riflemen before being confronted with a sharp knife.
The flags were as usual printed on my colour laser printer and PVA'd to florist wire poles.  For what it's worth, I drilled the figures' hands and glued in the florists wire before they were undercoated.
The Signal Company is pictured here training while on a visit to Forbodia.  I'm sure you recognised the landscape... 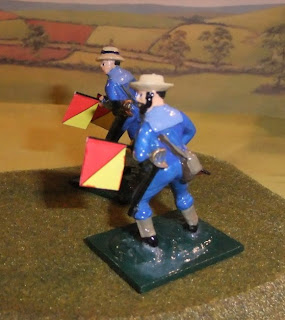 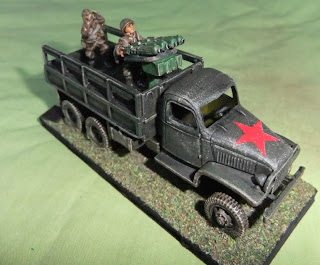 More AA support has arrived for the Comrades!  The leand-lease GMC truck is a Pegasus plastic kit, the Maxim and crewmen are Britannia metal castings.
While I've never seen a photo of such a combination, the Russians mounted Quad Maxims on hundreds of GAZ trucks in the 1930s.   I can't imagine they lasted forever... 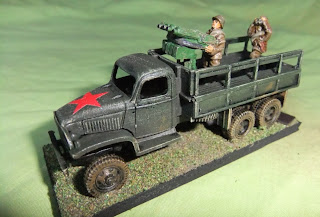 These comrades will soon be allocated to a Tank Corps, but for the moment they are filling their time scanning the skies for the Luftwaffe. 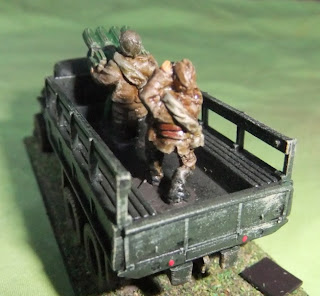 Limp no more, the Lysander is ready to take to the sky! 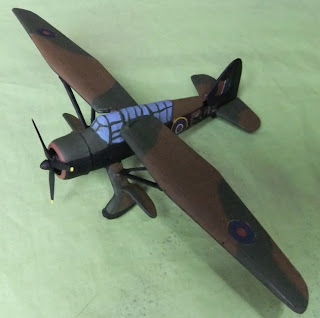 I used the markings from the kit.  I really wanted to finish it as a machine of 613 Squadron as this unit was based for a time at RAF Firbeck - a station only active between 1940 and 1945 - which is located only a few miles away.  Sadly the decal box was unable to rise to the occasion, so perhaps 613 Sqn will have to wait until a 1/144 Lysander is available.  No, I'm not holding my breath either. 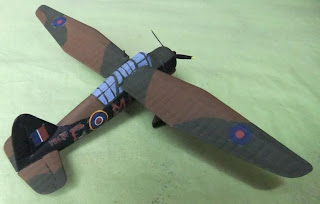 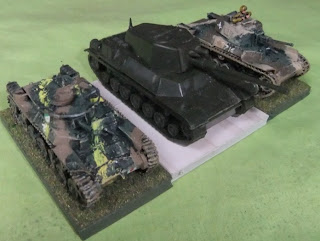 Time to expose yet another shady international arms deal now!  A mystery package arrived at Megablitz Towers recently from shady international arms dealer Don M.  Those who read (and can there be any who don't?) Don's blog posts will no doubt recall one of his eBay acquisitions which included a number of mystery tanks.  After some research Don revealed these to be examples of the rare Japanese Type 4 Chi-To Medium Tank .  In a surprise move he promptly sent me all four of them!  We'll gloss over the fact that in reality only two were ever built....
Clearly Don had followed the development of my 20mm Japanese armoured forces* and felt, not unreasonably, that the tanks were all a bit small.  The addition of the new medium (but by Japanese standards heavy) tanks will surely redress the balance.
Out of curiosity I dug out both versions of the Type 97 Chi-Ha medium tank to compare sizes with the Chi-To.  It is (again by WW2 Japanese standards) a big bugger.  The photos show a Chi-To posing with Arifix (left) and Fujimi Chi-Ha models.  I perched the Sumo tank on a piece of foamcore board similar to the bases of the completed models.
It remains only for me paint the new arrivals.  And to try and justify owning four of them.... 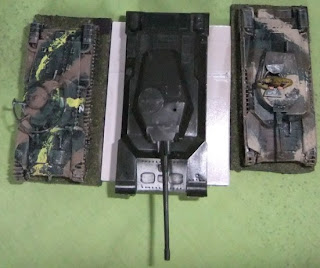