I'll just squeeze this in before then end of the month.  These chaps are senior officers of the Forbodian Army and are photographed with their transport - a 1905 Rolls Royce.  The officers are Tradition figures I bought in January - actually from their ACW range - painted in toy soldier style. 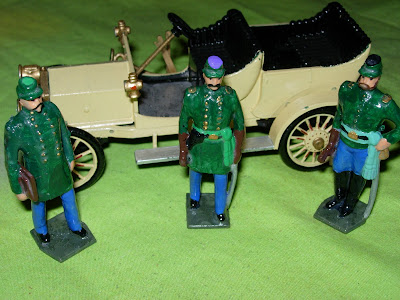 The evening of Wednesday 23 March saw another outing of the Corunna scenario, this time with real players - so I got to sit down and have a rest.  Martin Rapier donned his imaginary bicorne and took the part of Soult, while Moore's little known dual personalities were represented by Jerry Elsmore and John Armatys.
As usual I'll let the photos do most of the talking.  For ease and consistency, 'left' and 'right' are from the French point of view, and most of the photos were taken from my vantage point on the left side of the table.  Clear?  Good.
So another win for the French, but very close-run.  At the start of what became the final French turn both sides had 5 victory banners, with the first to 6 winning the game.  Unusually, no generals were killed in this game (even Moore survived!), although there were several near-misses.
Talavera next - and enough British infantry for another two units has just arrived (Ebay), so I may be able to give the Brunswickers the night off.  Maybe .
Posted by Tim Gow at 10:58 2 comments:

As I have declared this to be 'Car Month', I thought it was probably time to finish off the three Kuroganes I have had part-done for a few weeks now.  This is an interesting little vehicle and it is difficult to find much information about it.  I did, however, stumble upon this site: http://www.jsae.or.jp/autotech/data_e/1-8e.html which claims that the four-wheel-drive Type 95 dates from 1936 - four years before the Jeep!
The version in the photos has three (really) seats and is a metal model.  Sadly I have no recollection of which company made them and I've never seen it again.
Much of the delay in finishing was caused by painting suitable officer figures to accompany the cars, as I see them being used as division or even army level command elements.  Despite only needing three officer figures I (predictably) ended up painting enough infantry for an entire division.  But more of that later.
So here then are the three very different officers and their cars.
Perhaps readers would like to name their favourite?  I'm going with Officer 2.

I had been thinking of going to this show for a while, and was contacted last week by Len Cooksey who runs Ivanhoe Figures (http://www.spanglefish.com/ivanhoefigures/index.asp).  Len lives only a few miles away from me and suggested that we go to the show together.  Apart from a horribly early start (Len arrived here at 0530) this worked out rather well and meant that Len benefited (?) from my services as unskilled labourer and ace toy soldier salesman for part of the day.

Happily, and despite family troubles earlier in the week, Bob Cordery was able to put in an appearance and we managed a wander round the show together before meeting his nephew Jonathan for coffee.

Most of the traders deal in 54mm soldiers - anything from single plastic figures for under £1 each to boxed sets of painted metal toys for the sort of money I've often paid for cars.  My own purchases were modest.  I picked up another box of Italeri Mamelukes (£8.50 from Steve Weston (http://www.plasticsoldiers.co.uk/) and five figures from Sarum Soldiers' (http://www.sarumsoldiers.net/) rummage box (five for £10).  I could have easily spent more, much more, but I managed to keep in mind the large amount of stuff needing sorted out here.  It doesn't happen often.
Posted by Tim Gow at 16:50 4 comments:

Another recently completed model is this Humber LRC MkIII.  Not that there was much modelling involved, as this is from the Raventhorpe 'Ready to Roll' range and consisted of only two parts!  These were the car itself (resin), and the barrel of the Bren gun (metal).  I understand that many of these were used by the RAF Regiment in Italy and NW Europe, and so I decided that mine would serve as a Forward Air Controller - hence the blue beret poking out from the turret and oversized roundel. 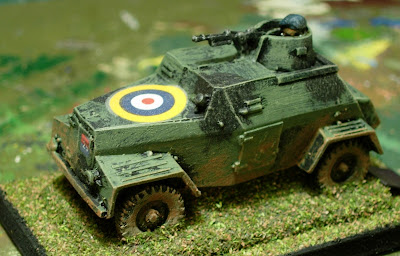 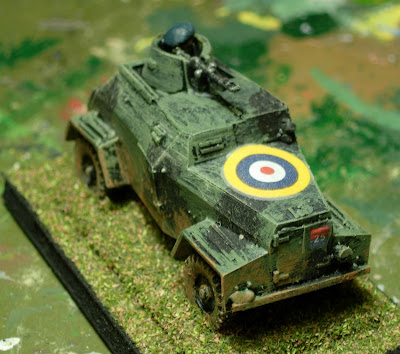 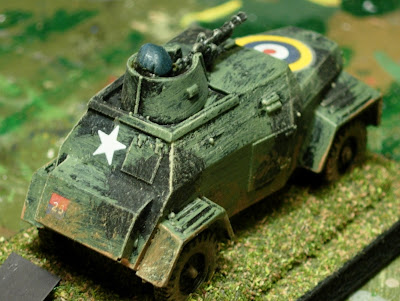 This pair of Yaks has been hanging around waiting to be painted since the Christmas holiday while I, for no apparent reason, agonised over painting them.  Photos I uncovered indicated that overall grey was the order of the day and this is what I finally went ahead with.  There were plenty of suitable (if rather fiddly) red stars (supplied by the excellent Dom's Decals) in the decals box, although I used red numbers rather than white as I had none of the latter in such a small size.
﻿ ﻿ ﻿
﻿
Expect to see these Yaks flying CAP over my Soviet Naval Infantry Regiment at some point.
Posted by Tim Gow at 08:49 10 comments:

Another 'car' completed recently was this Humber Scout Car.  This is a Britannia kit with a resin hull and metal wheels and commander.  I bought it years ago, but it has been left to 'mature' before being treated to the attentions of spray can and paint brush.  There's not a lot more to say really - it was a very simple kit to build and has been finished in my typical late-war green and black finish.  Quite a neat little vehicle - no doubt a much better drive than the Staghound MkIII which appeared here last week. 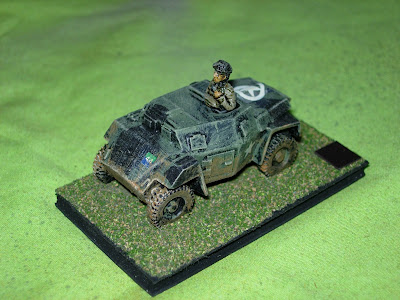 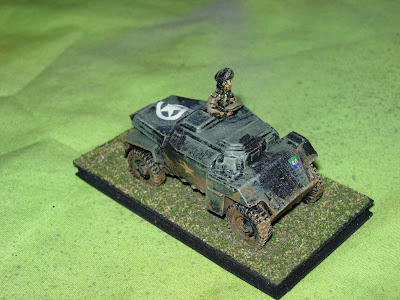 Regular readers of this blog (and visitors to my 'toy room') will be aware that I generally seem to have several (i.e. - too many) projects on the go at any point in time.  This was brought home to me last weekend when I realised that the bits and pieces on and around my modelling table included the following: 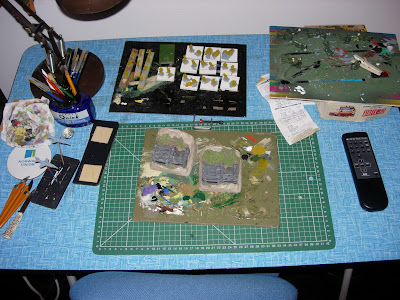 2. To accompany the cars I decided to paint some command figures, and the inevitable mission creep saw this increase to the figures for a complete infantry division.

3. A pair of 1/300 scale bunkers.  I found these in a box while looking for something else (no idea what that was...) and decided to sort them out.

4. A selection of additional figures for Forbodia - my fictional Funny Little Wars country.

5. Two 1/300 scale YAK-38 'Forger' VSTOL aircraft which have been hovering (sorry) around the table since December.

6. Three 20mm Arfix Japanese snipers left over from the batch I painted a couple of months ago.

Is it any wonder that sometimes when I stagger in here to do some fooling around with toys I don't know where to start?
Posted by Tim Gow at 22:07 14 comments:

Among my recently completed models is the man himself - King Boris III of Forbodia.  This dashing chap is a Tradition figure of an Austrian Archduke - I feel he has the right look. 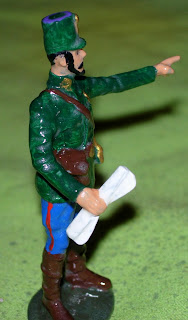 Forbodia's location is a closely guarded state secret which is only available on a strict 'need to know' basis. That's why it doesn't show up on many maps...
Forbodia is somewhere in the Balkans, the main cultural influences being Italian, Austrian, Turkish and Russian. Military influences include France and Great Britain.
A small Forbodian contingent was present at the battle of Leipzig in 1813 where the present King's grandfather, Boris I ('The Bonkers') suffered a small cut to the forehead from a wayward champagne cork. As a result, Leipzig is known in Forbodia as 'The battle of Boris's eyebrow'. Interestingly, Boris's delusions of grandeur increased greatly immediately afterward...
The present King - Boris III ('The Bewildered') has travelled widely in Europe and the Americas and is keen to modernise the country.
Of the reign of his father, Boris II ('The Boring'), little is known.
﻿
﻿

I have now played through this game and offer the captioned photos below by way of a report.  For consistency, I will refer to left and right from the French point of view.  No bias - I tossed a coin to decide.  As this was a solo game, I did move about a bit more than usual, so the photos are taken from a number of angles.  The game was played on my Hexon terrain (see previous post http://megablitzandmore.blogspot.com/2011/03/corunna-1809.html for a photo of the initial setup), and used my 15mm toys.
The game hung in the balance from a few turns in.  At first it looked as if Moore would have plenty of time to provision his ships, and indeed enjoy a leisurely dinner before embarking. but the French pressed on, their superior numbers enabling them to pull back spent units and send forward fresh troops.  The end finally came when the single stand infantry unit which Moore was accompanying was taken down by the muskets of a French column.  A good death, but a death nonetheless.

I am looking forward to playing this scenario again soon with 'real' players.
Posted by Tim Gow at 22:31 10 comments:

While checking a few details on Staghounds I discovered this rather interesting website:
http://www.staghounds.org.uk/index.aspx

The site is owned and maintained by Tobin Jones and James Shopland. Both own and are currently restoring Staghound armoured cars. The site offers a focal point for other Staghound owners, restorers and enthusiasts.  I'm not sure that a pair of 20mm models qualifies me as an owner!
Posted by Tim Gow at 09:18 No comments:

Hot on the heels of my 'vanilla' Staghound, we have it's rather sexier relative.  This is another Raventhorpe model and apart from the barrel of the 6 pounder gun being a bit chunky it's a pretty good representation.  Given the size (and weight) of the Crusader turret, one wonders how many were rolled while their divers were engaged in what the modern motoring press call 'spirited cornering'. 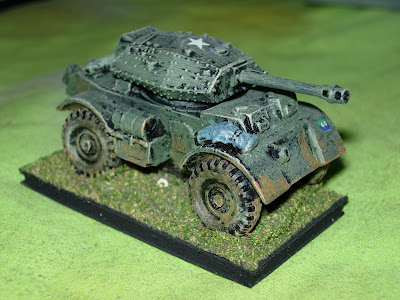 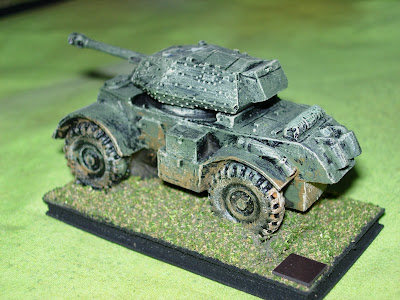 As part of 'Car Month', here is another recently (well a few months ago!) completed armoured car.  This T-17 Staghound is from the Raventhorpe 'Ready to Roll' range which comes as a 'kit' of 4 parts: resin hull & turret and metal gun barrel & hatch.  So not much building then, and my usual scruffy paint job.  The commander figure is a chap I had skulking in a box - I think he might be an AB casting. 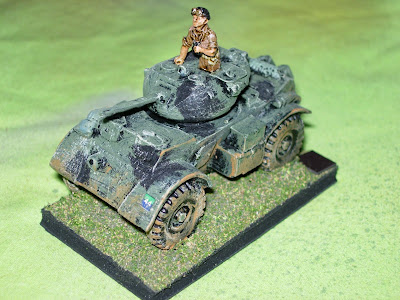 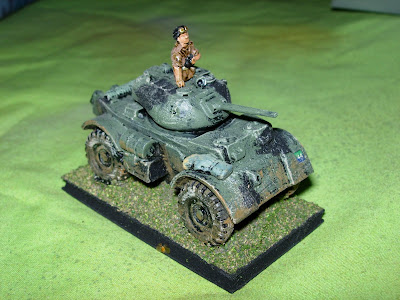 I have also finished a Staghound MkIII - photos coming soon.
Posted by Tim Gow at 09:01 6 comments: