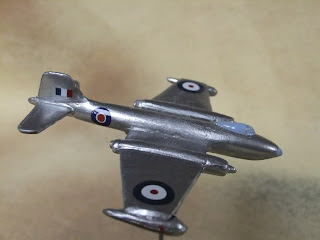 This pair are both 1/300 scale metal castings by Heroics & Ros and were painted a few months ago.  Both were treated to a sprayed coat of silver and one received the yellow & black stripes peculiar to aircraft involved in the Suez campaign.  The rather basic markings were cobbled together from what I could find in the decal box. 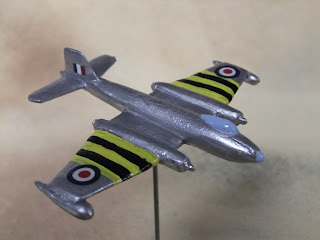 Little Wars Centenary - it's on! There is wild excitement as I prepare to set off for the Little Wars Centenary Event at Sandhurst this weekend!  No less a person than King Boris III of Forbodia (pictured below) has been supervising the loading of my car with not only his army, but other essentials including champagne and a very large sponge cake.  Hurrah! 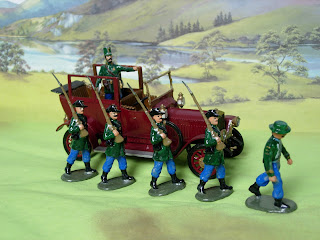 There will no doubt be more news of this event when I return. 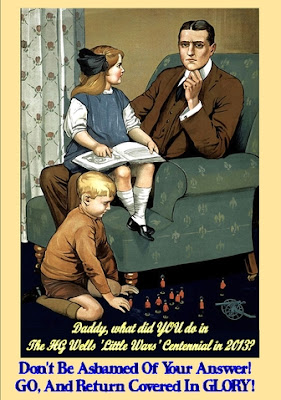 The pile of plastic unpleasantness is finally complete.  It probably weighs about twice as much as it should due to the amount of filler I had to use, but given the poor quality of the kit it doesn't look as bad as it might. 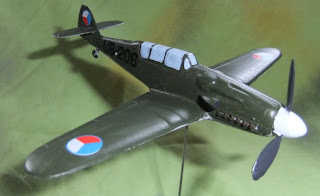 As far as I can tell, these two seaters were usually left in bare shiny metal while the single seat fighter versions (the S.199) often had a dark olive over pale grey finish.  Not being one to be constrained by reality, I decided on olive/grey paintwork.  The decals came with the kit and are actually OK, although they required nearly ten minutes in water before they could be applied. 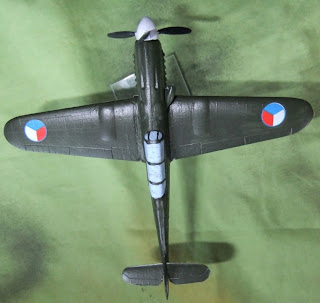 As there was no internal detail I decided to paint over the canopy.  Lazy but effective. 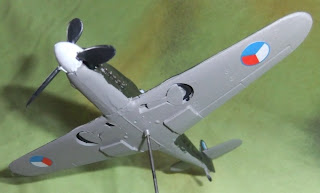 The propellor with it's huge comedy paddle-type blades makes me laugh each time I see it. 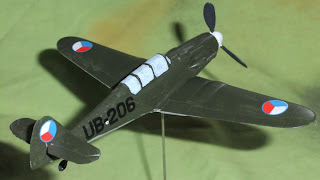 UPDATE 16/11/2015.  In the spirit of international comradeship this horrid model has now been passed on to Bertrand.  It will thus further lower the tone of his Cold War forces....
Posted by Tim Gow at 21:13 4 comments: 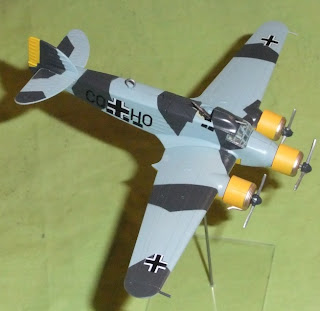 The third of my 'Gashapon' pre-painted SM.79s is this rather fetching Luftwaffe example.  Quite a few Italian aircraft were placed under new management following the 1943 armistice. 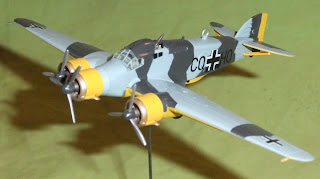 I think the yellow indicates that is aircraft belongs to a training unit.  It certainly makes for a colourful addition to the Luftwaffe bombers box! 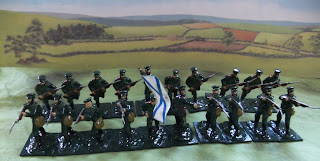 The sixth and final infantry battalion has now been accepted into the Tratvian Army.  Actually this is the Second (Rifle) Battalion and joins 1st Rifles and the Naval Infantry in 1st Infantry Brigade.  All clear?  Good. 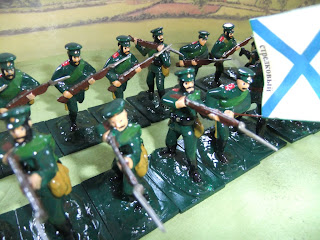 Like most of the Tratvian Army these chaps are Armies in Plastic figures. 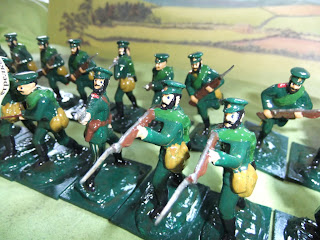 I have tried out a new varnish on this unit - Ronseal Outdoor Gloss Varnish.  It takes rather longer to dry than the other stuff and being solvent based it's rather smelly, but it does give a lovely high gloss finish.  I think I'll stick with it. 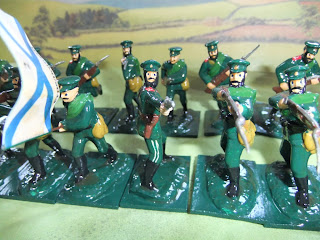 For extra stability all my 1/32 infantry are based on 30x40mm pieces of MDF. 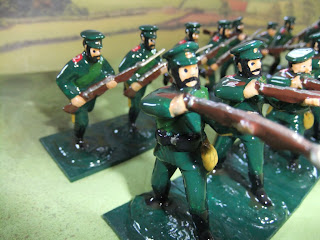 This pair of SM.79s are Japanese pre-painted 'Gashapon' kits.  Like the other such kits in my collection I completely dismantled them and then assembled the cleaned up parts before finishing off the decals.
A familiar shape which simply shouts "1930s", the 'Sparviero' (Italian for Sparrowhawk) flew in Italian service from 1936 until 1952. 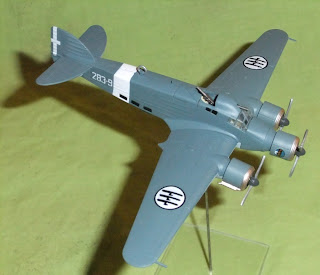 The Sparviero served mostly as a torpedo bomber and both these models are so armed.  I suspect that in Megablitz games, however, they'll mostly be used for conventional bombing. 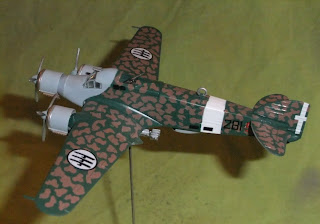 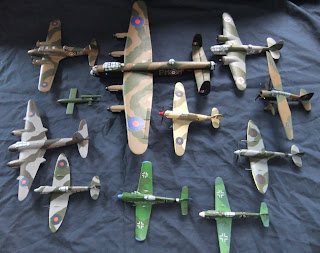 Here they all are then, by popular demand.  The 1/72 version of Luftflotte von Gow in all it's dubious glory. 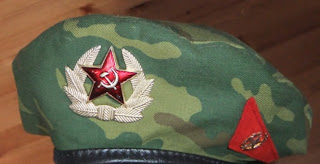 This game was set in the early hours of a shooting war between NATO and Warpact forces in 1981.  Martin designed and ran the scenario which was played with his 2mm toys and my NATO Brigade Commander rules.  John led the defenders (mostly British with some West German home guard types) from his bunker while I alternated between my BTR-50PU (room to work) and T-64 (photo opportunities for Pravda) at the helm of the lead two tank regiments from 10 Guards Tank Division.  John is rarely seen without his DPM jacket so I retaliated with my Motor Rifle beret.
The photo record is a bit scanty - if you want a reason choose from wartime censorship or my camera being low on memory... 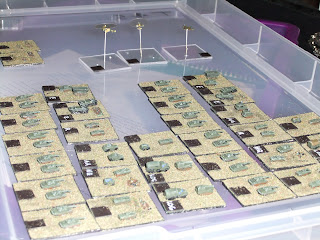 Above can be seen both tank regiments ready for action.  In NBC a stand usually represents a company, or in the case of WP-style units, a half-battalion.  Each regiment consisted of:
3 Tank battalions (T-64), 1 Motor Rifle company (BMP), 1 SP artillery battalion, 1 AA company, 1 recce company and a full engineer batalion.  I also had an on-call flight of SU-17, a flight of Mi-24 attach helicopters and an Air Assault battalion in Mi-8.
My briefing was as follows:
3rd Shock Army is pushing out of Magdeburg like an uncoiling spring.
10th GTD is tasked with clearing the march routes and lateral communications along the Mittelland Canal while main forces push directly along the Autobahn to Braunschweig south of the canal. Once the route is clear, the way is open to the rolling plain leading to Hannover.
Division and Front artillery are firing a massive programme in support, and our air attacks have achieved surprise.  Push forward rapidly, bypass centres of enemy resistance which can be left to second echelon forces and exit mechanised forces from the far side of the battle area. 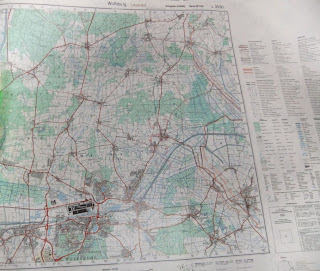 Martin had provided a map showing the terrain set up (using his Hexon), and when I spotted that we were in the area around Wolfsburg I remembered that I had a copy of the BAOR 1:50,000 scale map of the area.  Soviet planning was therefore carried out on a 'proper' map.

The Inner German Border was in the northeast corner of the map sheet, so I was expecting to face relatively light covering forces.  The main feature of Wolfsburg is the large factory complex (the black blob on the map).  If you've ever run a German-built Volkswagen this is where it was built. 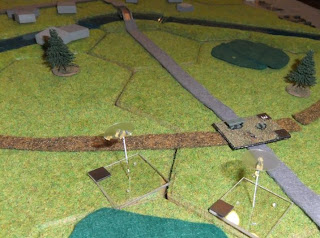 Highlights included the insertion of the Air Assault Battalion on this crossroads several km into enemy territory.  The crossroads was held by a British engineer company.  This was first beaten up by the Hinds and then overrun by the paras.  Orders of Lenin all round! 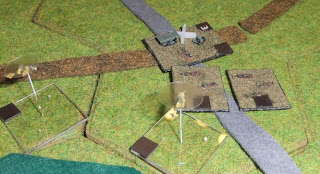 We wound up the game agreeing that the Soviet 'rollbahn' was clear, Wolfsburg being bypassed and left to one of the Category 3 Motor Rifle Divisions currently plodding throught Poland.
Conclusions (as fed back to 3 Shock Army HQ):
Heavy AT missiles in defensive positions can be very effective but once their positions are known they are extremely vulnerable to attack helicopters.
Our heavy investment in attack helicopters is paying off handsomely.
The latest Soviet tank designs are highly effective - 10GTD only lost a company-worth of T-64 in the border battles.
The British Harrier jets have been very overrated - their attacks were easily deterred by salvoes of light SAMs.
British light recce AFVs are highly agile but burn nicely when hit.
All evidence points to the historical inevitability of our forthcoming victory!
Posted by Tim Gow at 09:59 6 comments: