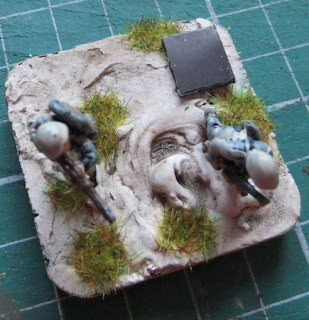 Don M (he of Brazos Evil Empire fame) has requested a post dealing with the bases I use for my 20mm Megablitz toys.  So if you're reading this and don't like it you know who to blame...
The ground scale I use is 4cm=1km, so a battalion sized unit ideally has a base width of around 4cm, as one kilometre is the minimum frontage such a unit would occupy.
Leg infantry are mounted on 4x4cm bases like the Italians above,  All photos have been taken against my cutting mat which is marked with a 1cm grid.  Hopefully this will help give readers a better idea of sizes.  The dark square at the rear left of the base is the mount for the unit's strength point (SP) marker.  I'll cover SPs in a future post.
My older (veteran?) units are based on balsa (3/8inch thick from memory).  I like fairly thick bases for two reasons:  Ease of handling - which helps to preserve the toys and to help set the stand apart from the terrain - this helps to overcome the notion that a toy tank or whatever represents a real one.  It doesn't.  Rather it represents a battalion-sized unit of, say 40-80 tanks.  All of this can really annoy self-styled 'proper' gamers.  Do I look bothered? 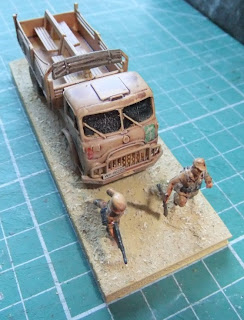 In the case of Motor Battalions, Panzer Grenadiers and the like who have their own integral transport vehicles, I mount the figures and vehicles on the same base - as in the case (above) of this battalion from 21 Panzer Division.  Vehicle bases are again ideally 4cm wide and can be as long as neccessary to accompdate the toys.  In case someone asks, the plastic figures on this stand are accompanied by their Roco Steyr lorry.  Very postwar but it somehow looks the part.

Some models end up on really quite long bases - such as this Flak batalion represented by an Sdkfz 7 (Roco) and trailer (Airfix), also on the strength of 21PD
More recent models have bases cut from foamcore board.  This is about as thick as the balsa bases but a hell of a lot quicker and easier (and cheaper!) to cut.  I use a steel safety rule and a Stanley knife with a fresh blade. 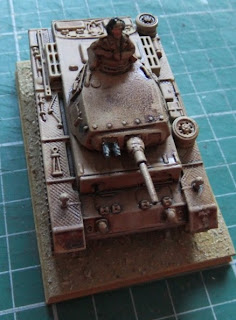 Some models - especially tanks and bigger guns need wider bases.  This Pz Abt (Matchbox PzIII with resin turret) from 21PD needs a 5cm wide base.  While we're dealing with tanks I should mention that I glue on the turrets.  It's not a PzIII, it's a battalion...   This too can annoy others! 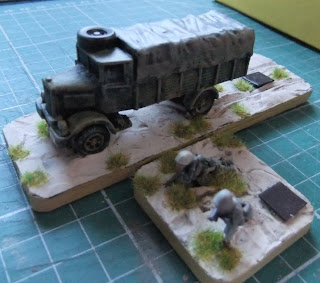 When building units it is always best to consider what looks more or less 'right', rather than what is 100% accurate.  A case in point is this Italian lorry.  This is actually a 15mm (Peter Pig resin & metal) model, but the real thing is so huge that this toy looks OK with 20mm figures. 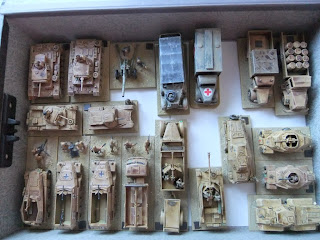 It is worth tailoring base sizes so that the finished division fits in a boxfile. It is evident from this photo that 21PD is a nice snug fit!

Remember that if you'd like me to run a post on a particular Megablitz unit (or unit type) feel free to ask.
Posted by Tim Gow at 22:28 13 comments: 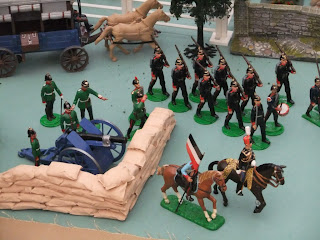 Now for a look at the game's opening moves.  Above we see yet more Teutionian troops marching to the front. 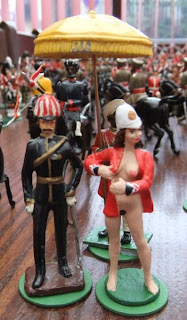 This Funny Little Wars game was played at The Old Colonial in Mirfield.  It saw the army of the Teutonian Federation invading an eastern province (think Norfolk) of Tinland.  The respective commanders were David Pinder and Julian Spilsbury.  I had been in touch with David via the FLW Yahoo Group and on the strength of my (relatively) extensive experience of FLW he had kindly invited me to come and umpire the game, take photos and generally interfere with the proceedings.  The photo above shows The Tinnish CO with his er, 'friend'.  Nice work if you can get it. 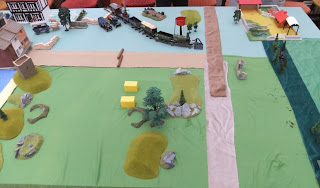 Above and below:  The 'country' as laid out the night before by David.  And yes, those are my dodgy gunboats lurking (under Teutonian flags) offshore... 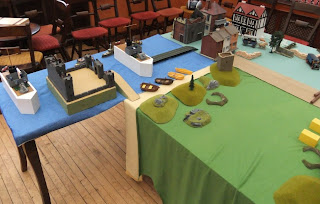 Coming next - a review of the Tinnish forces and battle commences! 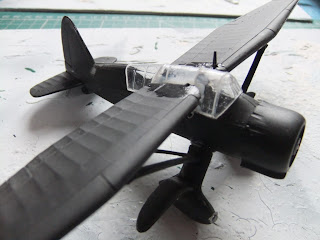 I have (for the moment at least...) managed to persuade the wings to remain attached and can turn my attention to some of the model's other flaws. 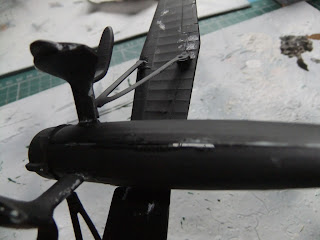 Chief among these was the additional ventilation caused by the fuselage halves not having been fitted together very well... 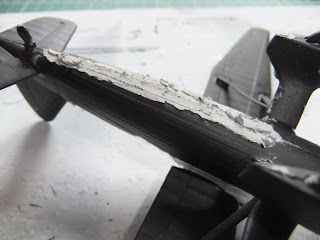 The victor (by a huge margin) in my most recent poll*, work has now commenced on the Airfix Lysander.  Unfortunately this burst of democracy had infected the model and the wings were making determined efforts to secede from the union....
Much clamping and glueing followed, and a few small bits were also reattached.  The prop will go on later.  As with the Lancaster and Mossie the windows are about as transparent as those on a 1980s Network Southeast train, so they too will be painted over.
Once the glue dries I'll deal with the rather alarming gaps between the fuselage halves...

Look out for another poll starting soon.
Posted by Tim Gow at 16:13 4 comments: 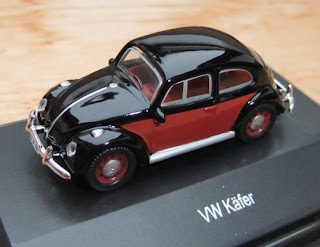 My stepson Louis recently went on a school trip to Berlin.  Apparently this was a great success - highlights included a visit to the Olympic stadium and a taxi driver who did impressions of the Fuhrer (including salutes) while driving.  Souvenir shopping time was limited but he managed to find me this rather lovely 1/87 scale Volkswagen.  Although this has the later large rear window it may well turn up as an officer's ride in one of my WW2 units.
Incidentally, 'Kafer' is German for Beetle.... 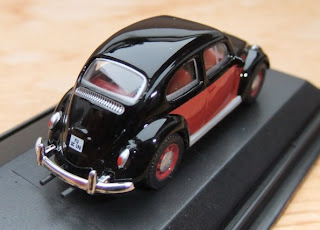 Email ThisBlogThis!Share to TwitterShare to FacebookShare to Pinterest
Labels: Cars 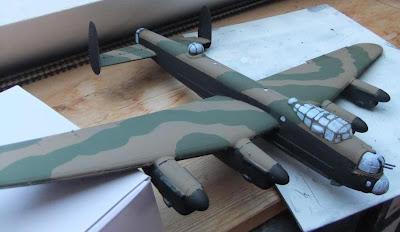 I managed to spend a bit of time on the Lanc a few days ago, but it's been a busy week.  The camo paintwork doesn't look too bad, and I've made a start on painting over the (not very) transparent bits.  More detail painting to follow.
Posted by Tim Gow at 18:09 14 comments: 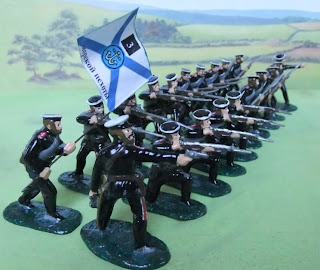 The Tratvian armed forces continue to expand. Rushing to the front with their varnish still tacky is this battalion of Naval Infantry. All 54mm figures are by Armies in Plastic. The standard bearer was produced with the aid of some minor surgery and a laser printed flag. Forward to the West! Whichever direction that is.... 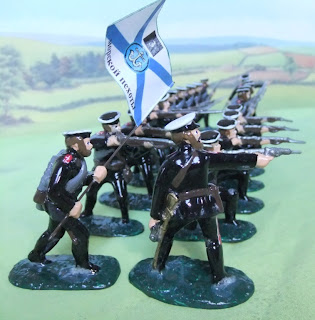 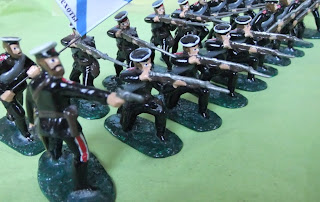 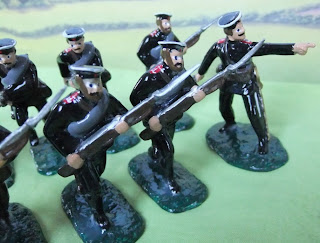 I recently took delivery of a further batch of 1/144 scale aircraft models.  These are all 'Gashapon' trading kits made by F-Toys and Cafe Reo and come ready coloured - requiring only assembly and additional decals. Actually they arrive part assembled but I always take them apart and glue all the bits together again.
At the weekend I began assembling a few of them - including Hurricane, SM-79 and Brewster 339 'Buffalo'. 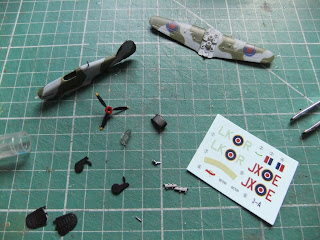 The batch included three Mk.IIC Hurricanes - I have so far assembled two of them. 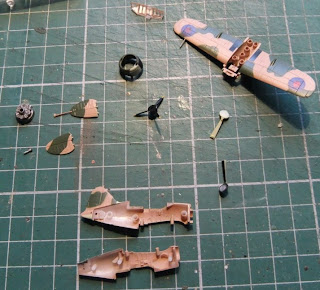 The trio of Brewsters included an RAF example (above) and a Dutch version - shown below assembled but as yet unmarked. 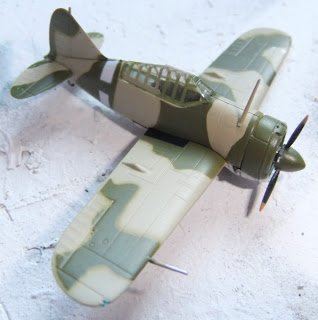 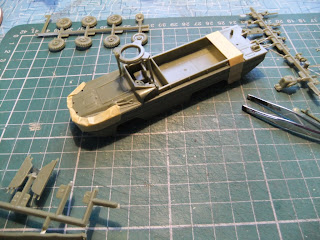 While avoiding the prospect of doing more work on the dreadful Airfix Lancaster I decided to add to the appropriate spares boxes a small accumulation of bits which had gathered over the past few weeks.  Actually quite a few of these had originally been attached (and none too securely) the the Lanc...
The recent discovery in another box of a DUKW windscreen reminded me that I had most of a DUKW in the spares box so it seemed reasonable to glue the whole lot together.  Happily the DUKW isn't a kit which requires an instruction sheet as I didn't have such a thing to hand.  Or maybe I've just built rather a lot of them.

Anyway here it is.  Once I reclaim my spray painting studio (garage) from the builders I might even paint it.
Posted by Tim Gow at 15:56 15 comments: 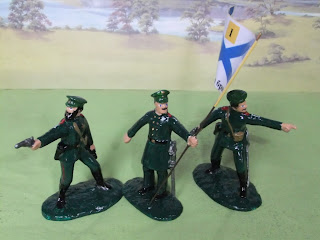 The continued growth of the Tratvian Army means I need some higher level command figures.  These chaps are (from left) the Brigadier, standard bearer and adjutant for 1 Brigade. They will ultimately be responsible for three infantry battalions (two line and the naval infantry).
All three figures are by Armies in Plastic - the officers from the WW1 Russian sets and the standard bearer is a converted officer from one of the napoleonic landwehr sets.
Posted by Tim Gow at 10:31 1 comment:

Only a single new release this year - but arguably two tanks in one!  As (surely!) everyone must know the T-34 kit included turrets for /76 and /85 versions.  This was another kit I came to after having built the (rather newer) Matchbox version and so I found it something of a disappointment.  That was back in 1978 when I thought such things mattered and I have long since managed to forgive the Airfix T-34 it's faults.
Above and below: a pair of pretty bog standard T-34/85s.  In my humble opinion this kit is at it's best as an /85 as it looks 'right' and the running gear and fenders look to be from a late (or post) war tank. 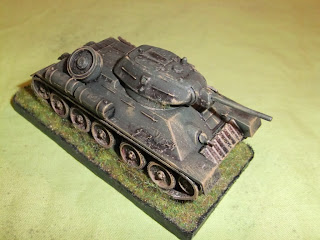 The weak point of the earlier turret is the rather spindly gun barrel - it looks more 20mm than 76mm!  This however is easily replaced.  The model in the photos was built from spares box leftovers and uses the tracks from an Airfix Mk.1 WW1 tank.  A desperate measure perhaps but as I'm sure Zhukov was fond of saying "you can never have too many T-34s..." 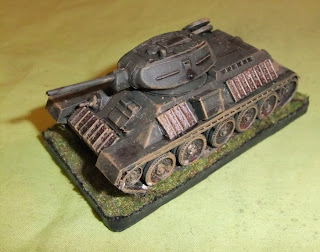