The Tratvian army continues to gently expand.  As a (slight) change from painting infantry I finished the gunners.  These chaps are all converted from Armies in Plastic figures, with shells made from a balsa skewer stolen from the kitchen.  There are four 3-man crews but they are having to work in rotation as there are only two guns at the moment!  The guns are the Britains 'Gun of the Royal Artillery' (Britains code 9715), both of which I picked up still boxed!  I expect that somewhere there are collectors softly weeping at the sight of these guns actually being used... 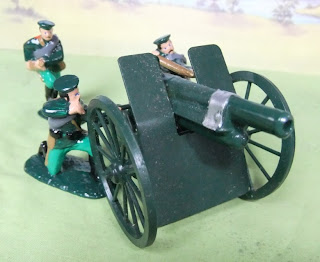 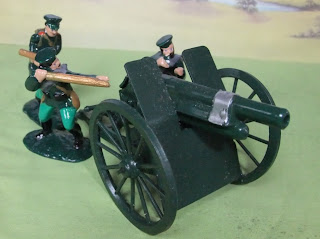 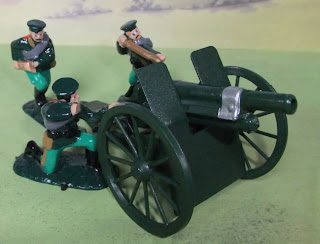 Fans of proper modelling will be pleased to learn that Wg Cdr Luddite has sent me photos of some of his new toys.  First up is HMS Glorious as she appeared in 1940.  The Wg Cdr tells me that this is a GHQ 1/2400 casting.  With aircraft in the same scale lined up on deck.  He doesn't get out much... 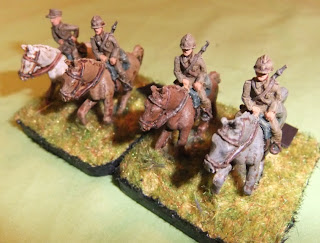 Not quite, but four horsemen nevertheless - from my collection of 20mm 1940 Frenchies.  The five Light Cavalry Divisions in France at this time were part horsed and part motorised units.  They seem to have been used as recce screens for higher level formations.  The photos on this page don't include the whole division as I use the cavalry as a 'bolt-on' to convert one of my DLMs (Light Mechanised Divisions) to a DLC.  Clear?  Didn't think so.
The cavalry figures and their mounts are Raventhorpe metal castings.  I still can't paint horses. 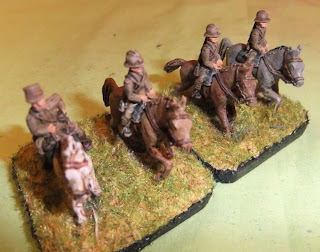 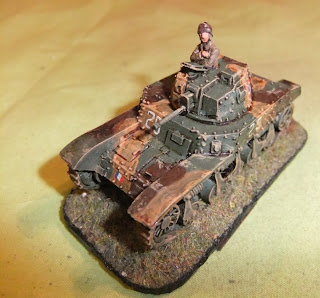 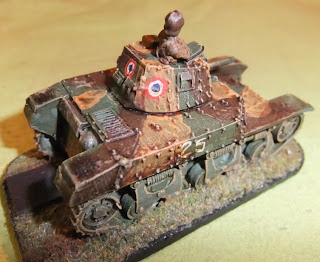 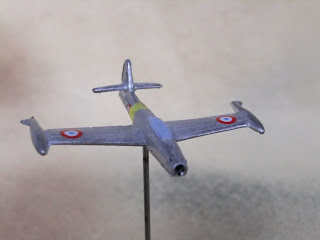 It's been a quiet week on the blog - not least because I've been away for a couple of days, and I haven't played any games since the beginning of the month.  Hopefully what passes for normal service should be resumed next week, but to keep you going here is another recently painted 1/300 model.
This F-84 (maker unknown - probably Heriocs & Ros) came in a batch of aircraft I bought years ago.  I decided to finish it with French markings, over a simple paint scheme of sprayed on 'chrome' silver.  I can now see from the first photo that I should have spent more time straightening the tail surfaces... 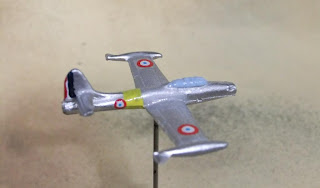 To accompany my Soviet cruisers I clearly needed some destroyers.  A study of the 1922-1946 volume of Conway as usual provided some inspiration and a pair of Airfix Tribal class DDs were soon being hacked around.  The results, in the shape of Silnyi and Slanvyi can be seen below.  The turrets were sourced from a Revell Scharnhorst and the torpedo mounts cut from plastic sheet.  I really must get them into a game sometime. 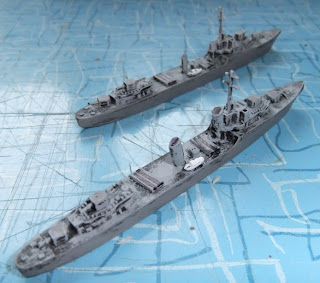 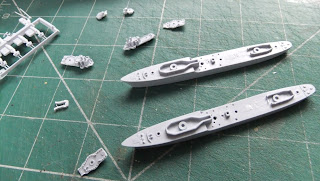 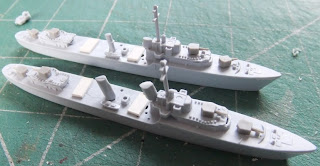 Hot on the heels of my Matilda Mk1 is this Mk2.  Built (quite some time ago!) from the Fujimi kit, I painted this to look like a well-travelled BEF tank.  This was the first (and so far only) time I'd built the Fujimi Matilda and it's quite a crisp little model.  A little more involved than the Airfix kit of the same tank, though the latter still holds up well. For a look at some Airfix Matildas (built for service in North Africa) see my earlier post here.  The commander figure is a Raventhorpe metal casting. 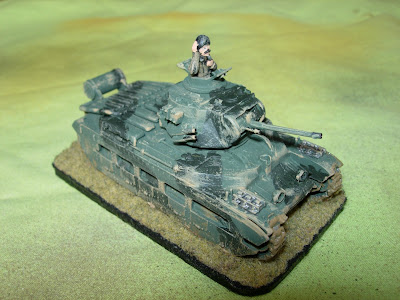 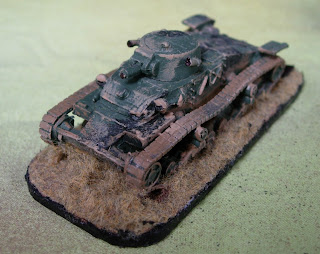 I took these photos ages ago - at the same time as I posted the photos of my other early WW2 Brits - then kept forgetting to post them!   This Matilda Mk1 was built from the Skytrex metal kit and was already quite elderly when I acquired it nearly 20 years ago in battered but unbuilt condition.  I feel that the paintwork is certainly showing it's age, especially in the harsh glare of the camera flash.  Do I need to repaint it? 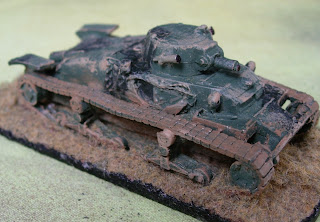 Another dose of the Trats

News just in from The Tratvian Empire!  The Tsar's army continues to expand, and further recruitment has taken place in the province of Armeezenplastec.  These gallant chaps have been formed into the 1st Rifle Battalion and have recently been mustered for a photoshoot.  Further units are being recruited just as quickly as I can paint them.  So quite slowly then. 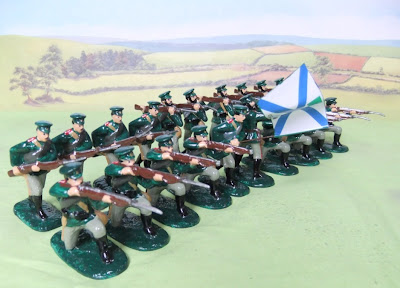 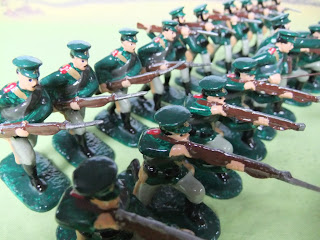 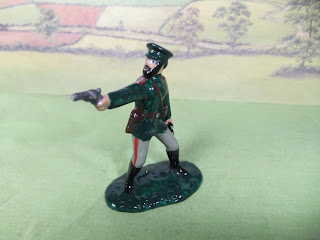 Staying on the rails

My previous post (Von Gow's Express) prompted many comments, including several enthusing over the use of trains in wargames.  And quite rightly!  One which concerned me was from Pete who suggested that the use of trains in 20mm scale games was "unlikely".  Not being one to shirk a challenge I dug through the blog archive and reproduce photos below of trains taking part in 20mm Megablitz games.  Pete, I hope you are suitably inspired!

This was a game run by Martin and using his 6mm toys and my NATO Brigade Commander rules.  The action was set in 1944 and centred around a German scratch force sent from Sevastopol to stem the advance of the Stalinist hordes.
For some reason I was again typecast as the chap in the shiny jackboots while Martin ran the Russians.
My forces consisted of a Flak battalion (part mounted on a train!), two infantry battalions and an assault gun battery.  I had to stop the Sovs getting any tank or motorised infantry off the western edge (left in the photos) of the board.

My previous post prompted many comments querying the players' attire.  As can be clearly seen in this photo (from Mark Hides), standards have slipped since HGW's day.  From left:  Lloyd (umpiring), Martin (apparently thinking), your humble correspondent (adding quality), Ian and and Dave (heckling). 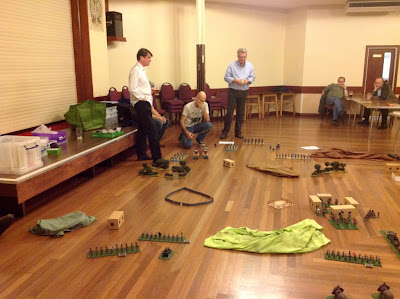 Does it look any better in black & white?  You tell me. 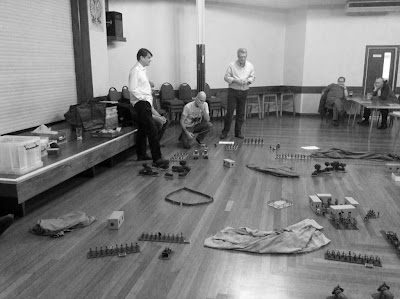 Little Wars in The Time Machine

During last week's Little Wars game, it struck me that some of the photos were very evocative of the original pictures in HGW's books. Just for fun I converted a few to what used to be called 'black and white'.  The combination of shiny toys, block-style buildings and a varnished hardwood floor certainly works for me.  What do you think? 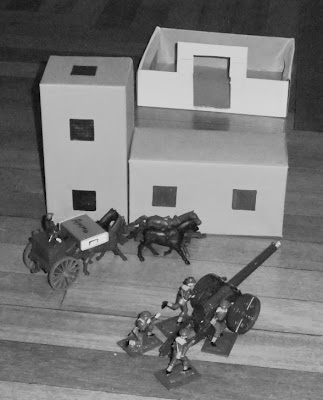 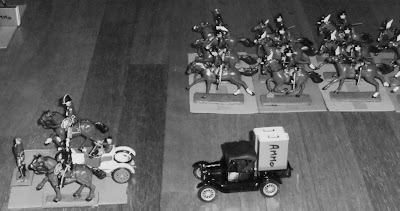 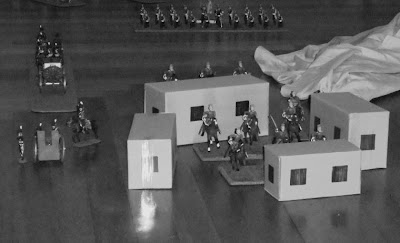 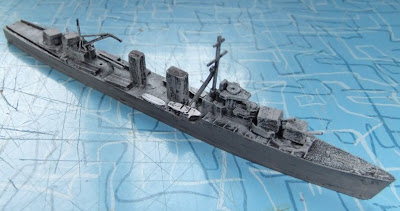 Krasnyi Kavkaz (Red Caucasus) was originally laid down in 1913 but due to minor mishaps including wars and revolutions it wasn't completed (to a much modified design) until 1932!  Happily my version didn't take quite as long to build.  Though a 1/1200 cruiser I based it on a 1/700 destroyer hull (see the earlier post).  Although only one such vessel existed in real life I was unable to resist building two of them.

The photo below shows the completed builds before paint intervened.  Turrets and funnels are balsa. Boats, catapults, cranes and foremasts from the spares box.   The gun barrels and mine rails (at the blunt end) are florists wire.

Further to my earlier post, Steve has sent me some photos of his toys from the LW game last week.  As you can see, he's not a fan of the traditional toy soldier look!