This was adapted from a Skirmish Campaigns scenario.  I’d used another from the same book a while ago - see the report here.  Mostly we used A Fistful of Lead. 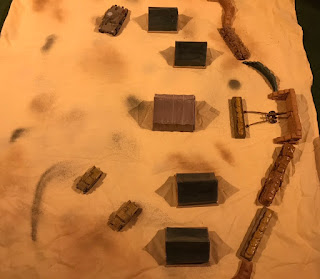 This time the Italians were dug in and asleep but expecting a possible British attack from the east. The wicked Brits spoiled it all by appearing from the west. Rotters. The attacking forces consisted of an infantry section (Jerry), a sapper detachment (Tim C) and a Matilda tank (John). 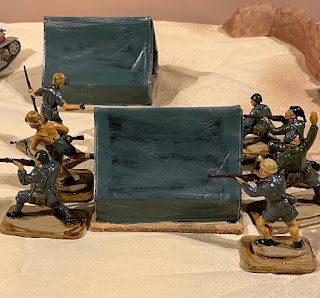 The Italians had two rifle sections (Martin and Pete), platoon HQ and AT gun (Diego) and a tank platoon (Russell). They all started the game fast asleep in the tents.

As the first Brits arrived one of the Italian sections woke up and while fire was exchanged Caporale Pete ran around shouting, trying to wake his comrades. Soon the gun crew turned out and ran to their weapon. 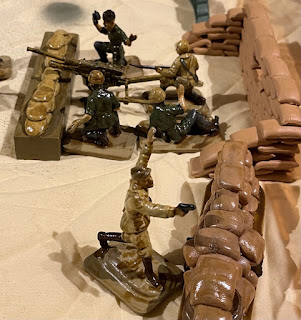 Here, while the gun crew set up - and turn the gun to face west - Tenente Diego appears to be running off! 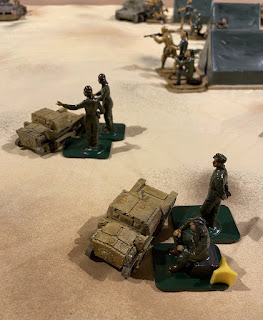 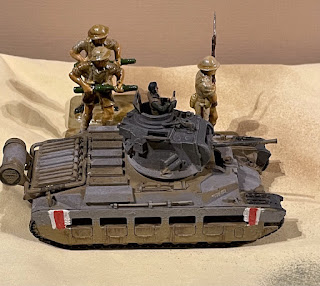 The Matilda (a 1/48 plastic kit) clanks on from the NW, accompanied by the sappers. 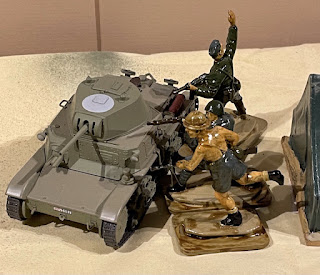 Cpl Pete and his MG crew engage the sappers from the dubious cover of the as yet uncrewed M13 (1/43 die cast/plastic model) . The MG fire soon did for the commander of the Matilda! 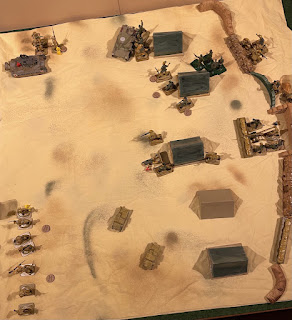 And overview. The Brit infantry are in the SW corner. 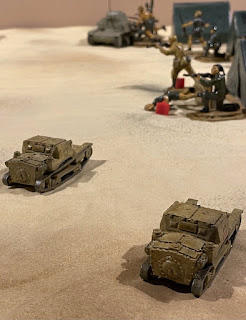 The tankettes are crewed and eventually the engines fire up! 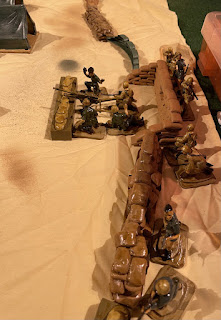 While Cpl Martin’s section sneaks south behind the wall, the AT gunners engage the Matilda which shoots back…. 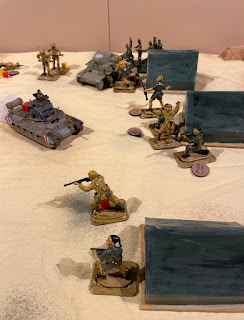 …and grinds forward.  AT gunnery was of course resolved with a nerf gun and a block of Oasis. My gunnery was as usual pretty terrible. 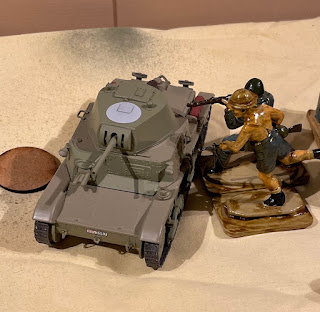 By now the British sappers have placed a charge on the M13…. 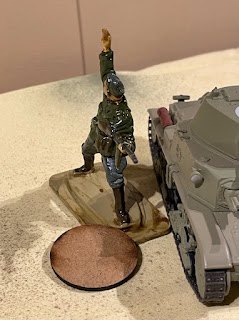 …so the heroic Cpl Pete dashes forward to grab it. Sadly he then perished in a hail of fire. It’ll look damn good in the film though! 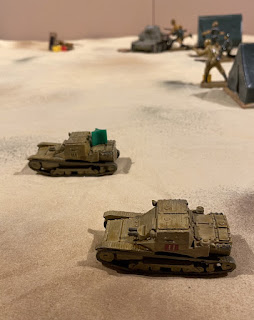 Russell’s tankettes we’re now on the move and merrily machine gunning the Brits. 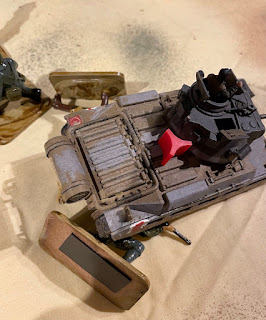 In other armoured action, the Matilda rather unsportingly ran over a tent, crushingly brave Lt Diego and one of his riflemen. 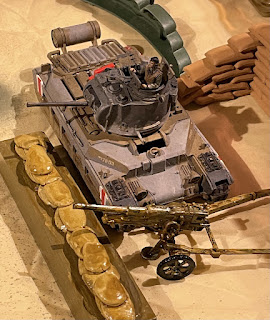 The Matilda ground forward and crushed the AT gun. And got stuck in the gun pit. By now the crew was aboard the M13 but having failed to start it they bailed out! 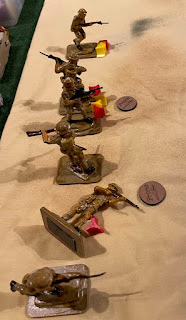 Under fire from Italian MGs and tankettes, Jerry decided to sneak off. 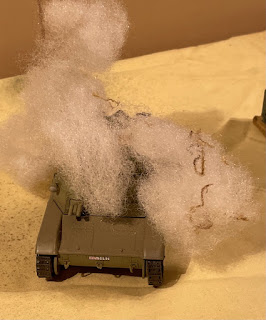 And finally - a loud bang brought the M13. - and the game - to an end. A points win for the Brits but their infantry have skulked off and the tank is stuck.  A bloody little game, the only players whose figures survived were Martin and Jerry - a 71% casualty rate!
Thanks again to all of the players for indulging such nonsense!
Posted by Tim Gow at 17:30 14 comments: 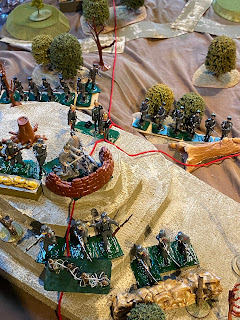 Here - at last - is the final part of the Verdun report.  Above is the German position on Telegraph Hill.  Note the additional field telephone lines hastily laid in anticipation of a French assault. 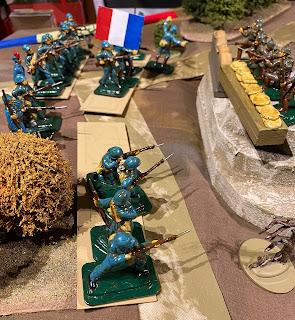 Artillery Hill.  Historically the French attack - insisted on by the top brass but otherwise regarded as pretty futile - was led by the elegantly turned-out Colonel Macker. 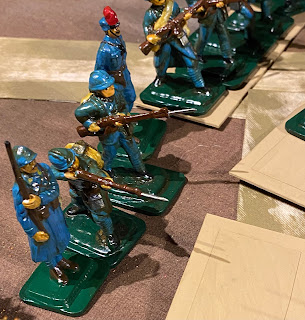 And here - resplendent in kepi with red plume - is the man himself.  The real Macker led his men in person carrying a cane and smoking a cigar.  One wonders what was going through his mind at the time. 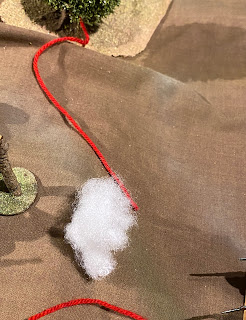 One of the more entertaining happenings was an early break in the German wire.  A runner was swiftly dispatched to effect a repair. 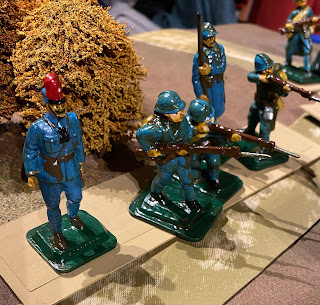 Another view of Col. Macker.  The figure is a Mokarex hard plastic pre-war officer. 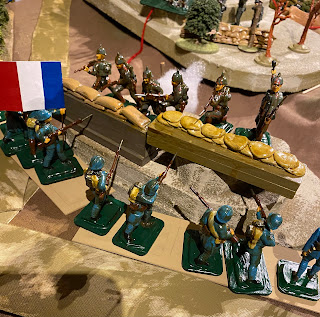 Artillery Hill was captured after a bloody struggle. 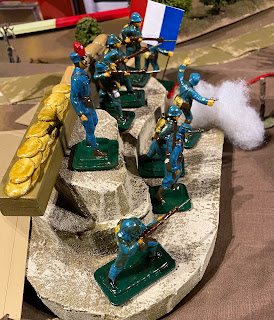 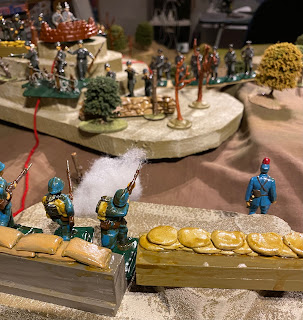 At this point the bold Colonel was still standing. 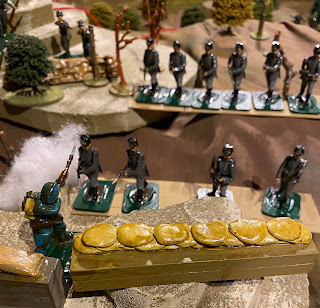 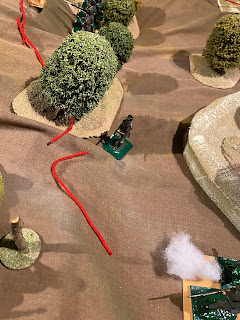 Meanwhile, as the Germans repaired the first breach in the wire, it was cut in two more places!
And finally, here were my main references for the game: 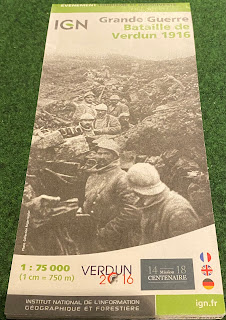 This excellent map is recommended for battlefield visitors and it turned out to be very useful for the game. 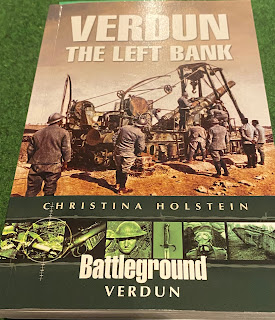 This was a slightly random purchase but I now want to visit the area it covers! 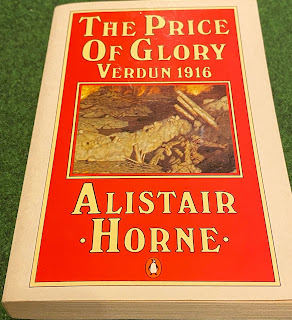 And of course this old classic.  Both books describe Col. Macker's attack and indeed it was this which inspired the game.  As always, in among the entertainment we think of all those who did this for real and I offer up the game and these reports as my humble tribute to Col Macker.