Another naval interlude now.  HMS Broke was one of four destroyer leaders being buult for Chile before the Great War.  Purchased for service with the Royal Navy (as the Faulknor class) on the outbreak of war, three survived to be re-sold to Chile in 1920.  Both of these are MY models - that above being a much older casting. 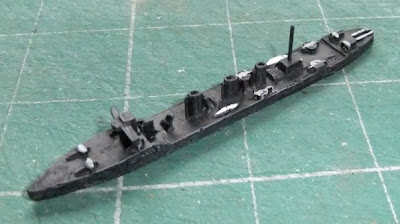 This was a game set in the well-known fictional African country of Ph'tang.  The newly elected President Fred was inroduced in a previous post, and this game covered his efforts to cling to power in the face of hostile factions and (most dangerous of all?) his own bodyguard.
Roles, (with those who played them and why) were as folows:
President Fred (Steve T - he likes to wear a big hat)
You are the democratically elected and benign ruler of the small African state of Ph’tang, your party P.O.N.G. (the Ph’tangi Organisation for National Glorification) having swept to victory at the last election. Under your direct command is your devoted (and well remunerated) bodyguard, The Purple Helmets. You also have at your service a loyal unit of the Ph’tangi Army, namely F.R.O.L.I.C. under the command of your loyal but sinister subordinate Captain De'ath.
Objectives:
Captain De'ath (Wg Cdr Luddite - he is rather sinister)
You are the loyal and trusted sidekick to the recently re-elected President Fred of Ph’tang. You command F.R.O.L.I.C. (Fanatic Regiment Of Light Infantry Cowards).
Objectives:
Colonel Incognito (Dave S - he has the beard for it)
You are the Cuban ‘adviser’ to and thus de facto commander of L.A.D.A. (the Leftist Army of Darkest Africa). Having assembled your forces in nearby Zoone, the time is now right to invade Ph’tang in the interests of peace and stability. You have instructed the local revolutionaries to take action, and it is better that they sustain the casualties, rather than losing your expensively trained regulars…
Objectives:
The Limp Wrist (Martin R - he was once seen reading the Guardian)
You are the shadowy and mysterious leader of a popular uprising against the evil and repressive dictatorship of President Fred.  Your organisation, The Peoples Organisation For Socialism is covertly backed by the Cuban sponsored Leftist Army of Darkest Africa (L.A.D.A.) which is massing on the border prior to invading Ph’tang. Now is the time for action!
Objectives:
The table (6x4 feet) was set up with a small town, woods, hills, the presidential compound, barracks and a river marking the border with neighbouring Zoone. 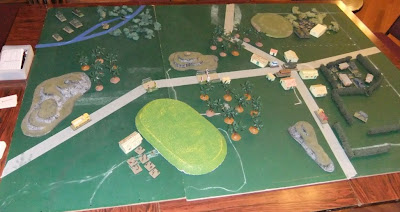 As well as very basic 'rules' governing movement and firing, the main mechanism of the game was the Matrix Argument.  For those of you unfamiliar with such things, have a look at the appropriate page of the WD website.
Posted by Tim Gow at 12:09 12 comments: 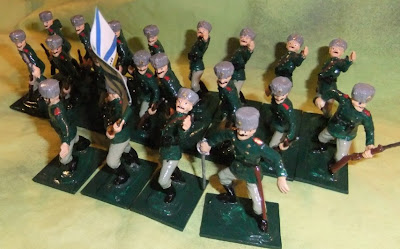 The latest addition to the army of Tratvia is this Guard Infantry Battalion.  These elite chaps are Charbens plastic figures.  Though clearly intended as Russians - the fur hats have big star moulded on the front - their rifles are a bit of a mystery, looking more like short FN FALs than anything Soviet.
Conversion work was limited to cutting down all the rifle magazines and carving the rifle from the standard bearer before drilling his hands to accept the florist wire flagpole. 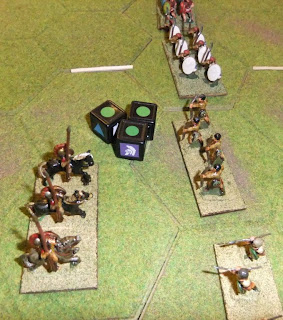 Last week I re-ran the Crocus Plains scenario with C&C and my 25mm toys.  John took the role of Phillip II of Macedonia while Steve T was the Greek not bearing gifts.  The Macedonian cavalry got stuck in quite early and tore into the Greek left.  Above we see some Greek skirmishers suffering 75% casualties.  Theirs chums (below) were soon in a similar position leaving Steve rather despondent. 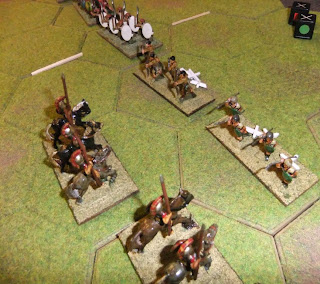 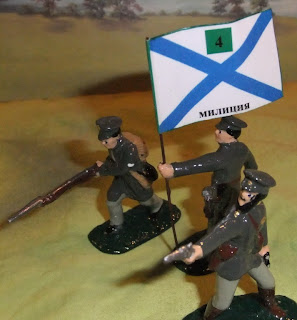 Hot off the modelling table is this addition to the Tratvian Army.  This Militia Battalion was recruited from Armies in Plastic Napoleonic Prussian Landwehr and Russian Militia figures, while the pistol toting CO is from the WW1 Russian set. 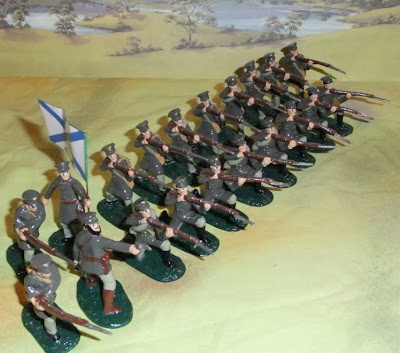 Mangling a Morane - or 'Here comes another Fokker'* 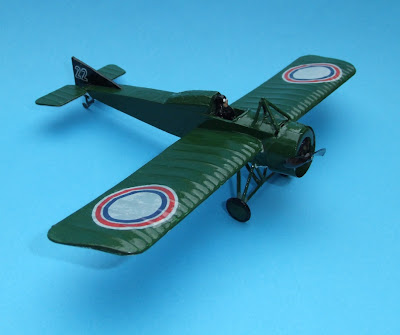 Having decided that the Tratvian Army required some air support I began a search for a Morane monoplane.  Sadly none was to be found (at least not for a reasonable price) so a spot of kitbashing and bodging was clearly required.
I had earlier picked up the old Revell kit (1/72 scale) of the Fokker E.1 for under £3, so even if it all went horribly wrong it would make only a modest dent in the defence estimates.
The Fokker was about the right size and had the correct wing quantity, so after that it was a case of determining the more distinctive characteristics of the Morane.  These seemed to consist of a fully cowled engine, a pronounced fairing behind the pilot, a pointy rudder and much simpler undercart struts than the Fokker.  A new rudder was made from plastic card and the fairing carved from balsa.  The engine cowling was made from a piece of metal foil and the kit parts adapted to produce the undercarriage and the bracing strut arrangement in front of the pilot.
All this made it look, if not exactly like a Morane, at least a bit less like a Fokker!  Painting it green helped too.  A generous coat of gloss varnish was applied to fit in with the 'toy soldier' look of Tratvia's ground forces.
Incidentally, I am told that Tratvian markings are easily confused with those of a (clearly fictional) country called 'Russia'.  You've been warned.

*With apologies to Witnail and I - http://www.youtube.com/watch?v=WwEpq3skueI&feature=fvwrel
Posted by Tim Gow at 08:18 11 comments: 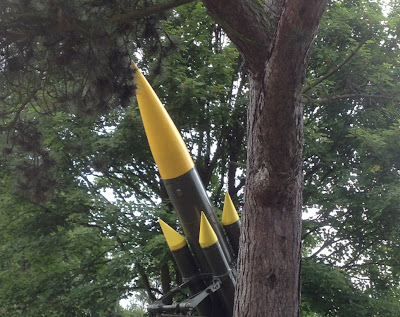 While out for a walk recently I spotted this Bloodhound AA missile in a (large) garden.  As it was behind a high wall one can only speculate about what else might lurk therein.
Interestingly, when I showed this to some of the chaps at the Sheffield Club they were rather less concerned with "why have an air defence system in your garden" and the conversation moved quickly on to what the most suitable system would be!  Leading the field so far is a Bren on an AA tripod.  Worrying really, isn't it?
Posted by Tim Gow at 10:44 16 comments:

Email ThisBlogThis!Share to TwitterShare to FacebookShare to Pinterest
Labels: Silliness

Further to my recent post on a delivery of matchstick firing cannon to the tradesmens' entrance of King Boris's palace, I am pleased to report that Mr Crook has supplied yet more guns!
As well as a pair of healthy Britains 25-pounders, DC sent the rather striking silver field gun seen in the photo being delivered.  This is a Lone Star model - and one which I've not seen before - with a similar firing mechanism to the 25-pdr. 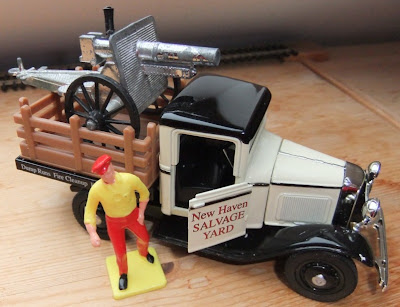 It is likely that King Boris will send the gun as a present to his chum the Tsar of all the Tratvians.  Once the latter has acquired a name.  And paint. 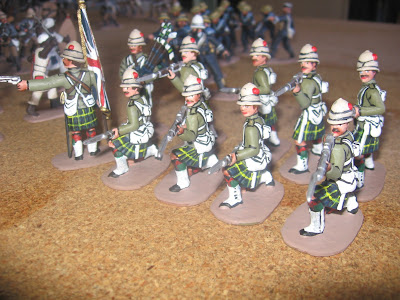 One of the commentators on my recent TMP post provided a link to his own website.  Horse and Musket features some beautifully painted 54mm toys so regular readers of my blog can see what they're meant to look like!  Have a look: Horse & Musket
Posted by Tim Gow at 09:59 No comments:

My trip to North East England last month included a visit to the Heugh Battery.  A coastal defence fort (with a slight look of the old Airfix gun emplacement), this was the battery to first engage German warships during the Great War.  If you are in the area the Battery is definitely worth a look - highly recommended! 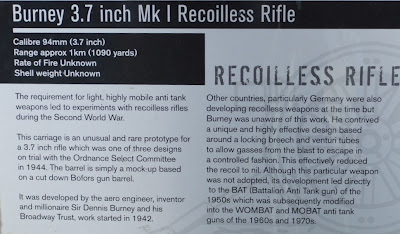 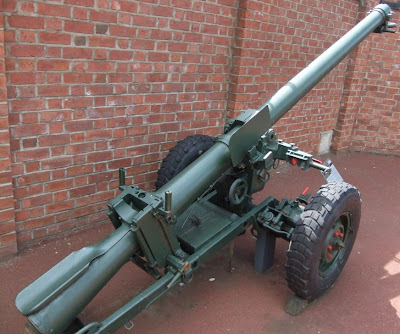 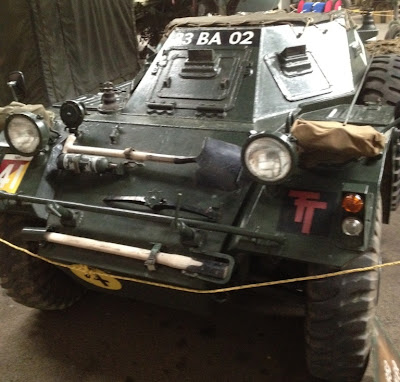 I posted the first part of this museum visit a couple of weeeks ago featuring the aircraft collection.  Now for the other (land) exhibits.  Above is a good old Ferret.  I'm sure I could fit one on my drive.