Paddy Griffith has asked me to publicise the above forthcoming event.  This multiplayer 'crisis game' will be played in the atmospheric surroundings of IWM Duxford on 1st May 2010.  Please see the Duxford website for more information:  http://duxford.iwm.org.uk/server/show/conEvent.3266

I participated (as an umpire) in the previous such event, which dealt with the invasion of Crete and as such I can highly recommend the game.

I understand from Paddy that there are still several places available.  These may include German/British/French and Norwegian roles in command if Land, Air or Naval forces.
Posted by Tim Gow at 16:55 No comments:

This game was another in Martin's series of WW1 Corps level engagements.  On this occaision, our corps under newly promoted Jerry Elsmore (General Mitchell having been recalled to HQ for urgent consultations)comprised 2 divisions - one French and one British.  In addition to our divisional troops, The French division (John Armatys) was supported by 3 heavy artillery regiments and a tank unit (Schneiders). Us Brits had 4 heavy and one super heavy (a rail gun) artillery units, a forth infantry brigade, a tank unit and a cavalry brigade.  I think the corps commander must be an old India hand, bless him.
The corps ready to roll.  Brits on the right, French on the left.  Any resemblance the rail gun bears to the German rail gun used in a game last year is entirely coincidental... 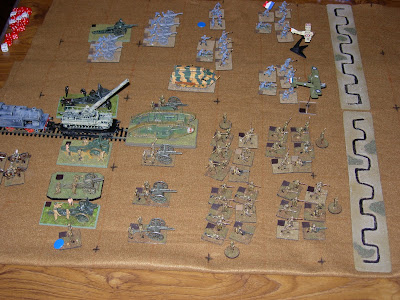 Most of the toys are from the collection of Martin Rapier - the British and German figures are Emhar and the French mostly old Airfix.  The Schneider tank is  from a card kit (apparently it was a bugger to assemble).  The allied heavy guns are from my WW2 French units and the British tank is an old Airfix veteran.

Below: The Brits formed up for the attack.  Once again my trusty (or just rusty?) RE-8 takes to the skies to spot the Boche guns. 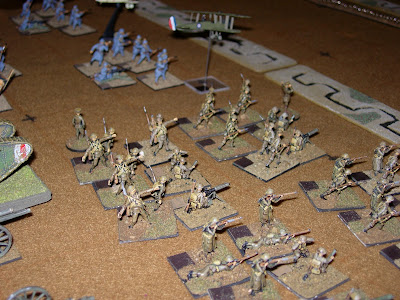 The French advance showing almost pre-war levels of elan.  The Poilou with the flag marks the regiment rated as 'dashing'. 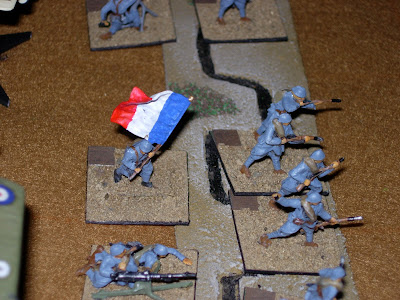 The results of the Allied bombardment.  After 2 days the wire in the French sector has been cleared. The nasty looking cloud over the Hun redoubt is gas. 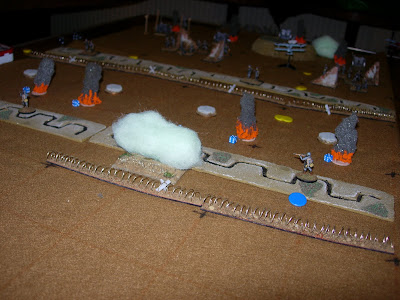 Side by side the Allies storm through the (lightly held) German front line. 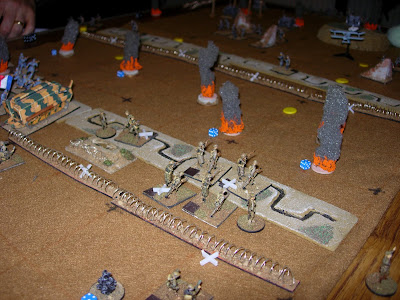 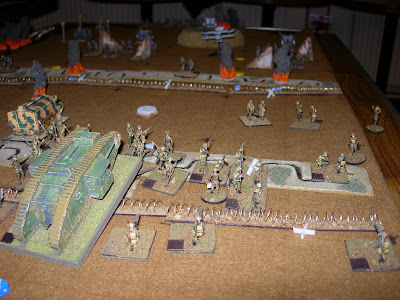 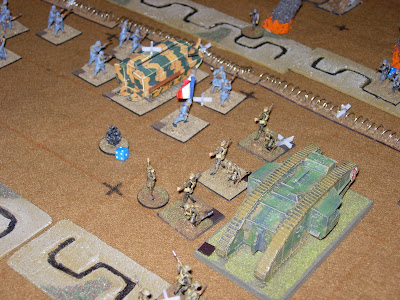 The Brits prepare to assault the second trench line.  The reserve (dashing) Brigade accompanies the tanks. Artillery and infantry fire had  by this time driven off two counter attacks by hordes of Jerry Stormtroops, 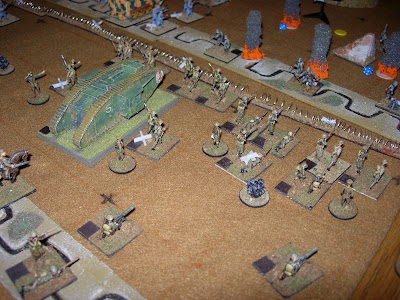 Ancient and modern!  The Cavalry Brigade follows the armoured spearhead to the green fields beyond(?)
Ironically the tank is ancient (30+ yaers old) and the cavalry quite new. 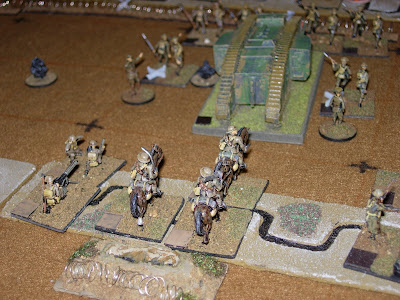 Breakthrough (after only 3 years...)  Sadly the French armour expired in the bitter struggle for the village. 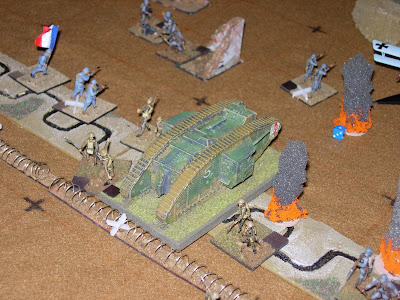 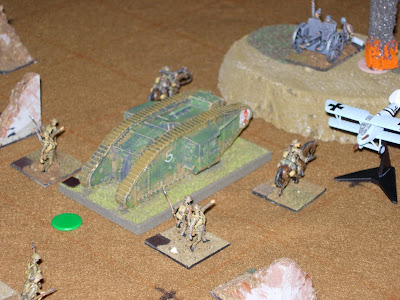 Endgame.  A rare colour photo taken by British air recce .  Not the RE-8 - it got shot down by a swarm of Hun fighters. 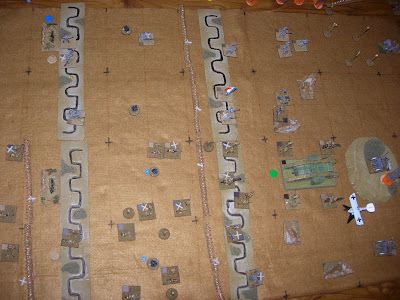 Following on from my earlier post, I have now had the opportunity to take a few photos of my 2mm toys.  I have 3 armies in this scale:  dark blue, pale grey and a small red force.  I figured that these colours would cover most nationalities of the mid to late 19th Century.

As mentioned previously, these figures are produced by Irregular Miniatures and are really rather nice.  For pics of figures which haven't been compromised by my painting and photography have a look at:  http://www.irregularminiatures.co.uk/

Painting, as one might expect in so small a scale was fairly basic, although thinking about it my painting of any scale is pretty basic...   The figures come cast in strips for infantry (2-3 ranks in various lengths) and cavalry and guns are in pairs.   I sprayed everything matt black and then drybrushed on the base colour (blue, grey or red).  A smaller brush is used to paint a 'stripe' of flesh at face level.  My Infantry and cavalry are based on 30x15mm card.

Here we see an heroic Confederate division of 3 brigades being assailed by two stronger Yankee divisions.  All 3 have attached artillery deployed in support. 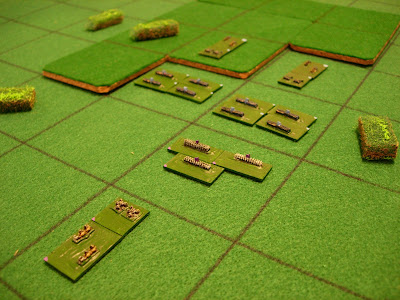 These are cavalry from my 'red' army. 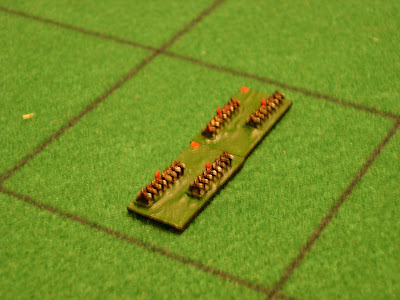 Here we see 'blue' artillery in a redoubt. 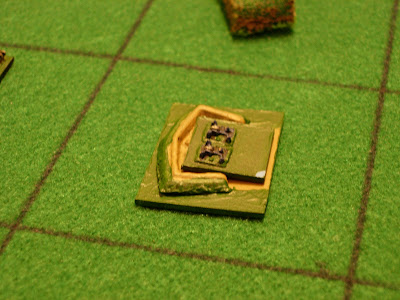 I also have command (left) and army HQ (right) stands. 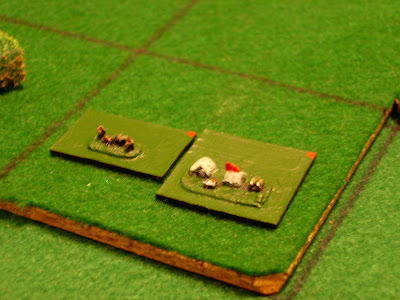 Finally, 'at the rear with the beer and the gear', wagon trains.  The board (a felt faced cork notice board) is marked up in 7.5cm squares.  The hills are cork tiles faced with felt.  The 'woods' are green panscrubs sliced up and drybrushed.  By inverting both board and hills (move the toys first!) we get 'desert' terrain! 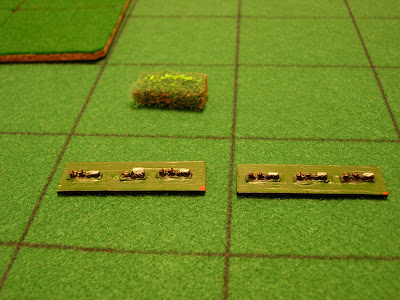 Firstly - my apologies for not having posted anything for a while.  In additon to all the usual pressures on time, my father has been in intensive care for over 3 weeks now.  Bad enough, but it's a 6-hour drive for me...

Anyway, on to happier things.  On Wednesday night Martin Rapier and I (assisted and heckled by John Armatys) played our lightly modified version of Richard Brooks' American Civil War game.  This game, whose name provides the title of this post is a 'lite' version of Richard's 'Minischlacht' rules for battles of the mid to late 19th Century.  Additionally, 'Terrible Swift Rules' formed the basis for the 'Rifle & Kepi' rules as used for the refight of Magenta I reported late last year.

TSS is played on a squared grid and we used my Irregular Miniatures 2mm toys.  Predictably I forgot to take any photos but I'll set some up and post pics later.  Probably.

All the units (divisions) in TSS are initially represented by markers until they come into contact (adjacent squares) ar are recce'd by real units.  These are a mix of 'blinds' and real divisions (with varying numbers of brigades, some with artillery).  Needless to say the Bluebellies have more real units and more (and better!) artillery.  Not that I'm bitter or anything,

In our game Martin turned out to have 5 real divisions against my 3.  And his units were bigger.

The Rebs fought bravely, the single division on my right flank being overwhelmed by two larges US divisions.

As night fell my strongest division, bestet by foes on all sides, finally broke (or to use the period language of the rules was 'whupped') and slunk off.

Meanwhile my third division broke through the centre of the US lines (ah, so that's where all the US blinds were...) and now sits astride the Feds' lines of comminications.  This is my Blog, so I say it was a clear victory for the CSA.