...so that's why things have been quiet around here for the past week.  I try to avoid the interwebnet when I'm abroad as I know I'd be tempted to look at work-related stuff.
We stayed in a apartment near Estapona in southern Spain http://maps.google.co.uk/maps?hl=en&tab=wl .  The scenery (away from the coast) was pretty spectacular and I'll post some photos from our days out later this week.

This was our most recent Command & Colours - Napoleonics game, played on 12 October 2011 - close enough to the anniversary (27 September).  Martin commanded the French (who for once didn't have to cross a river and attack up a big hill) while John and Jerry led the Brits and Portuguese.
Terrain and 15mm toys from my own collection.  And I didn't paint any of them!
Posted by Tim Gow at 17:05 4 comments:

More 'action' pics from Volturno.  Actually these mainly show players lazing about - 'in combat' shots are understandably rare!
And finally - as a treat for Paul, another pic of 'Claude', a Simca Sumb before his recent repaint.

More photos now from Volturno, mostly showing the Germans moving into position.  One of the nicer things about the WW2 airsoft games I have attended is the amount of time spent on non-combat cocking about - approach marches, sorting out defensive lines, constructing positions, patrolling etc.
Photo credits as per the previous post.
Posted by Tim Gow at 16:25 2 comments:

Last Saturday saw me attend another WW2 Airsoft event.  Set in Italy in 1943, this was actually held at Close Action Airsoft's Weekly Hall Wood site in Northamptonshire.  This made it an easy day trip for those of us in the Sheffield area.  The scenario involved US and British forces attempting to clear up German rearguard parties following the breaching of the Volturno Line.
The German forces (about a platoon) were split into a section each of FJR, SS and Heer.  The Heer (Army) section was theoretically Gebirgsjager (mountain troops), so I wore basically my Luftwaffe Field Division gear, topped (for posing around the car park purposes at least) with a Gebirgsjager field cap.  Martin had enhanced his look with a big rucksack and a rope of the type normally used for securing ocean liners.  Steve chose to debut in his Heer uniform.
Photo credits go to Comrades in Arms members Martin R, Cheeky Chappy, Sgt. Heide and Pride of England.

Meanwhile, back in the slave market...

The Rose Miniatures 30mm 'Roman Slave Market' figures I mentioned recently (Rude Romans) are now available once more!  See more at the Garrison Miniatures website  At £0.80 each I reckon these are quite a bargain!
Posted by Tim Gow at 11:03 14 comments:

It is my sad duty to report the demise of my chicken, Von Kluck, after a short illness.
Kluck has appeared several times on this blog and it is on account of her modest international following that I post this news here.  Kluck was always by far the fastest of our three chicks and moved with a grace unattainable to the others.  Indeed it was issues with her movement which first alerted us to her being in less than perfect health - to the point where she was falling over.

Our concerns about her movement and the need to ensure her safety led us to bring Kluck into the house, and she lived for the last two weeks - apparently in good spirits - in a large cardboard box in Sara's office.  Sadly her ability to move continued to decline and latterly needed to have food held in front of her in order to eat.  We decided last night that the time had come and Sara took plucky Von K to be put to sleep by the vet this morning.  When I last saw Von Kluck she was tucking into her breakfast of scrambled egg and tomatoes.
The other two chicks - Shelley and Fluff - initially seemed a bit lost without their chum, so we'll have to keep a close eye on them.  The plan is to look into getting more chicks in the spring - any new arrivals will be featured here.

The original chicken post can be viewed here: Link

This game was played a few weeks ago but with my customary inefficiency it has taken me some time to write it up.  The historical battle saw the Macedonian army under Phillip II defeat a Greek force under Onomarchus.  Would history be repeated?  Given that I took Phillip's role while Martin was the man in the Hoplite outfit it seemed unlikely...
It will be clear from the above - and my apologies for the relative lack of photos - that the battle did not go well for Phil II.  Due to drawing consistently shocking cards I was never able to mount a decent attack and my phalanx - first hoplites then pikemen were soon put to flight.  I expect Phil went home in a rage and killed his son or something. I forget his name - Alexander maybe?
Posted by Tim Gow at 17:07 13 comments:

Repulsive is now complete and running trials on the modelling table.  She has been subjected to my usual 'rough drybrush over black' paintwork and is ready for a proper voyage and battle.  Which I really must get round to organising. 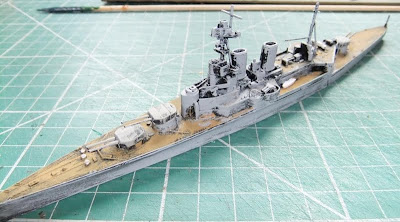 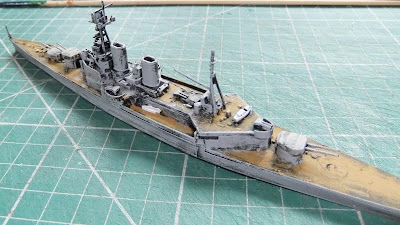