While putting together the most recent Fletcher Pratt scenario, it occurred to me that others may be tempted to undertake similar ventures, so what follows is my attempt to pass on the dubious benefit of my experience in this area.

What you'll need to run the game
A. The rules!  Various versions are around, but I can strongly recommend the recently published book edited by John Curry which includes not only the rules (and several variants) but a lot of commentary and useful background information.  See the History of Wargaming site for more details.
B. Ship cards - templates and some completed cards can be found on the aforementioned site.
C. Pens - players and umpires will need to mark off damage on the ship cards.
D. Rulers - players will need these to measure ship movement.  I use rulers marked out in knots and printed on thin card.  Ideally one per player.  I have made mine available from my new 'downloads' section (see top right on the blog page). 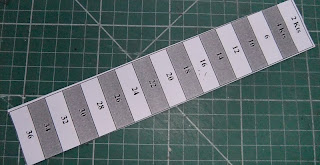 E. Measuring tapes - for the use of umpires only!  A 2-metre (6 foot) version should be adequate.
F. Golf tees.  Blue for misses, red for hits and white for torpedo hits. 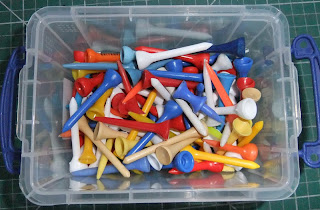 G. Firing Arrows.  It is possible to use more elaborate devices, but I simply use triangles of thin card cut from kit and breakfast cereal boxes.  These need to be blank on one side so players can write on gun details and range estimates. 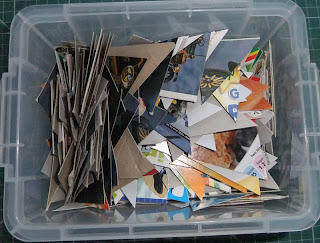 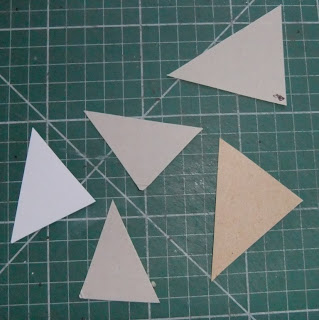 H. Admin tables for each side - the ship cards, pens and a stock of firing arrows should be placed on these, so umpires aren't always trying to find ship cards!
I. An umpire crib sheet.  This can be very useful - the information most commonly needed is found in the gunnery, torpedo and armour penetration tables.
J. Ship Models - it is worth pointing out that even with the (relatively) large 1/1200 models it is a challenge to pick out details at the distances in F-P games.  Given that I (and I know many others) apply the '3-foot rule' for tabletop toys, when played on a floor this becomes the '6-foot rule'.  In other words, if a scenario requires three Polish destroyers don't agonise over having the exact models - just ships of more or less the correct size! 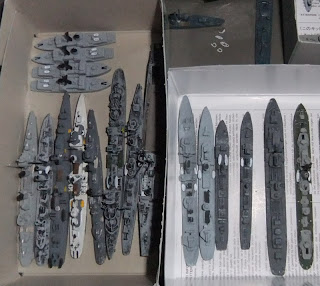 K. Wreck markers - not essential but they add to the fun!  I made three for a F-P game in 2005 and have yet to produce any more... 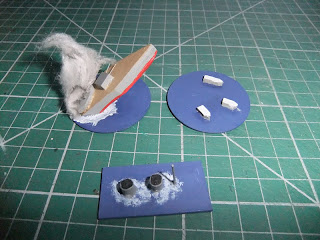 L. Player briefing - especially useful for larger scenarios.
M. A clearly marked playing area - for floor games.
N. Umpires - a ratio of 1 umpire to 2 players seems to work well.  When resolving gunnery it is useful to have umpires work in pairs.
O. And of course - players!

What to say before the game
Having assembled all of this, it is useful to give a verbal briefing to all players - especially if some are new to the game.  My own pre-game briefing includes the following points:
1. The game relies players to exhibit honesty and behave in a gentlemanly manner.  If you have doubts over this you are gaming with the wrong people!
2. Players may enter the playing area to move ships.  The time allowed for this is 30 seconds.
3. A further minute is allowed for placing firing arrows.  It is essential that these contain the following information:  number of guns firing; calibre; estimated range. 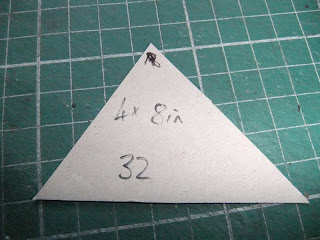 5. When firing torpedoes use arrows marked with the number of tubes fired.  These will be moved by the umpire team.
6. After placing firing arrows players should leave the playing area so the umpire team can resolve gunnery.
7. Players may wander off to smoke, go to the bar etc, but unless buying drinks for the umpire the game will not wait for them.
8. Players should be discouraged pointless firing - this includes single torpedoes at extreme range, destroyer guns at pretty much anything at anything more than point blank range and so on.  This avoids unnecessary work for the umpire team.
9. Players should be aware that movement and gunnery will be affected by damage inflicted - it is their responsibility to ensure they are working from up to date information.
Posted by Tim Gow at 18:16 4 comments:

Over the weekend I managed to finish some toys which have been hanging around for some time.  The recent donation (from Bob) of a couple of Pegasus KV hulls reminded me that I had a box of Soviet stuff built and largely painted which needed only a modest amount of work to finish off.
I'll begin with more of Bob's donations - the pair of T34s which he gave me about this time last year.  As these were ready-painted models - by Dragon and Deagostini - little work was needed on the models themselves.  After basing I simply drybrushed on some 'mud' and 'dust' to fit in with my other toys.
Staying with T34s, I then dealt with the pair of m43s which again came from Bob.  He seems to be under the impression that I don't already have large numbers of Soviet tanks...  The m43s are both Britannia models and apart from a repair to some flaking paint these were simply treated to the drybrushing treatment.

Carrying on from part one of this report, we rejoin the action as the two mighty armies come to grips.
The game produced a broadly historical result and took around two hours to play.
Posted by Tim Gow at 09:07 12 comments:

Some time ago I promised an expectant world a post on the availability of 1/1200 ship models - as used in my recent Fletcher Pratt naval games.  This then is it.
I will start off with the most useful, easiest to get hold of and indeed cheapest ships on the market - the Airfix 'Sink the Bismarck' set.  This set was (re-) released in 2011 and contains seven ship models - not bad for less than £20.  As well as building the ships as they are, this set offers numerous conversion possibilities.  Here are just  few I've thought of:
Hood - I have already used this to make ships vaguely resembling Repulse and the original build of Glorious.  Bob Cordery tells me that he once used the Hood to make some Japanese battlecruisers (Kongo I think).
Suffolk - The 'County' class amounted to a total of 13 units which I'm sure could be produced with a little knocking about of this kit.
Ark Royal - I expect that this could be adapted to produce several other carriers.
Tribal - 27 destroyers of this class were commissioned, so that alone gives us a fair bit of scope!  No doubt other destroyer types could be produced.  The Tribal is a big destroyer, so could be cut down to make, for example, a K-class.
Bismarck - er, Tirpitz I suppose.
Prinz Eugen - three 'Hipper' class cruisers were completed (although five were planned).  Being quite a big ship, I'm thinking it could be cut down to build various other WW2 heavy cruisers.
Other plastic kits in this scale are available from Revell.  The range currently includes the battleships Yamato, King George V, Iowa, the carrier Enterprise and the battlecruiser Gneisenau.  These currently retail for between £5 and £6 and can be adapted to other uses in the manner of the Airfix kits above.
A variety of metal models can be picked up - these vary in price from reasonable to very steep and in quality from adequate to rather nice.  At the upper end of both scales are models from companies such as Superior.

Another maker of metal (and mixed metal and resin) kits is Mountford.  These are quite reasonably priced - destroyers are about £10 for a kit and £14 for a built and painted model.
A large range of metal models is available from Mick Yarrow.  This range has been around for a while and I think was previously sold under the 'Trafalgar' name.  These are fairly basic castings - destroyers are one-piece castings without masts but are temptingly priced at £3 for a destroyer and around £7 for a light cruiser.
Coming at things from a slightly different angle, it is worth keeping an eye open for small vessels in larger scales which will fit in with 1200 scale models.  An example is the 1/700 Tamiya 'Tugger Set' which contains a number of small vessels including tugs and landing craft
Triang Minic ships often crop up on Ebay - the older ships can be prohibitively pricey (for me anyway) but may be worth looking out for at boot sales.  Some of the 'modern' ships may be of use.  These are metal (die cast) and plastic models.

Finally, an honourable mention must be made of Lou Coatney's astonishing card models.  I'm sure that assembling them is well beyond my own modest skills (and patience!) but they are deeply impressive.
I appreciate that this hasn't been a very exhaustive or scientific listing but I hope it provides some guidance and encouragement for prospective admirals!
Posted by Tim Gow at 12:58 16 comments:

As previously mentioned, here are more spares boxes.  These are filled with various bits of (mostly) 1/72, 1/76 and 1/87 scale vehicle kit bits.  While a a load of random bits line the bottom of the box, I tend to leave some stuff on the sprue - such as the Panzer II turret in the bottom right of the first box.  The spares cull I carried out a couple of years ago yielded the parts for a number of complete models, so assembling them created a bit of space.
More spares boxes soon!
Posted by Tim Gow at 08:07 10 comments:

A recent exchange of comments with Paul and Al sparked an 'I'll show you mine if you show me yours' challenge on spares boxes.  I carried out a savage purge of my spares boxes last year - yes 'boxes' - it's a long time since there was just one!
Posted by Tim Gow at 16:15 10 comments: 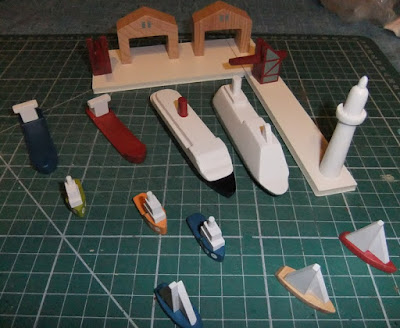 When I was in London last week I noticed on Oxford Street a branch of the Muji shop.  So I went in. For those of you wondering why, it was from their Leeds shop that I picked up a number of useful wooden buildings (as seen here in Greece and Germany ).  These are sold under such names as 'Village in a bag' and 'London in a bag'.
This time my eye was drawn to the new (to me) 'Port in a bag', the contents of which are shown above.  With thoughts of ever bigger Fletcher Pratt convoy actions in mind I was encouraged to see it contained a pair of container ships which will pass as 1/1200 coasters (no, not the sort you rest your coffee cup on...), three tugs and a liner (which will do as a ferry).  The modern cruise liner is less useful - although I was encouraged to see that during the photo session it remained the right way up....  The set also contains three yachts and two each of warehouse frontages, lighthouses and cranes.  At a marked price of £5 each, I lost no time in scooping up all four bags on the shelf and making my way to the cash desk.  Delight turned to elation when I was charged only £3 each for them!  Sadly there were no more in stock...  I gave one of the bags to Bob Cordery that evening and he agreed that the ships looked pretty useful.  If anyone has a use for the white modern liners I have 3 of them going spare...

I mentioned in my previous post that I had a few photos of the games I played with Bob Cordery on Thursday.  These were taken on my BlackBerry but are, as Bob commented, 'good enough for government work'.
The second game was hastily improvised and also used 15mm toys.  This was set in the 1930s and saw my chaps in field defences subject to an assault from a numerically superior (well, a bit) force.