This years outing to Triples (in Sheffield, for those of you who don't know!) featured our new game Sturmstaffel. In this participation game, up to 6 players take the part of German 'volunteer' fighter pilots defending the Reich in up-gunned and up-armoured Fw190s against a formation of B-17s.
The favoured approach was the frontal assault, turning after passing through the bomber stream and picking off the damaged and crippled. 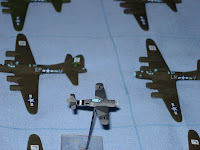 Sturmstaffel kept us all (me, John Armatys, Jerry Elsmore, Nick Mitchell and Martin Rapier) busy throughout the weekend. I reckon that we had over 100 players in total!
Other highlights of Triples included the MAD Gamers participation game of Isandlwana (by reflex I just shouted 'Zulu') which Martin and I played late on Sunday afternoon. Suffice it to say that there were no British survivors and that one om my Impis captured Lord Chelmsford's colours. The game provided an interesting contrast to my last 'visit' to Isandlwana (also using Baccus 6mm figures) at Wayne Thomas' games day in late 2007. On that occasion I was the only British survivor - saved only by a Flashman-like headlong flight with the colours wrapped round my quaking body!
Posted by Tim Gow at 13:36 1 comment: