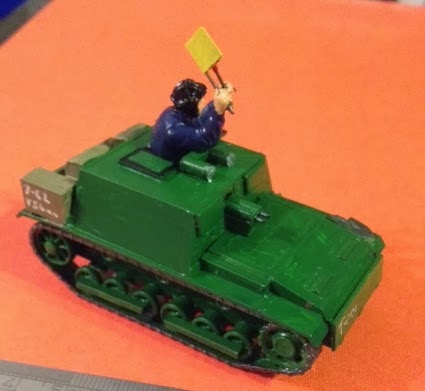 The recent Ebro game saw the debut outing of my bodged tankettes. Here are the Mk.1,  a later post will cover the Mk.2. I’ll let you study the first two photos and try to guess what it’s based on. The punchline comes in the final pic. 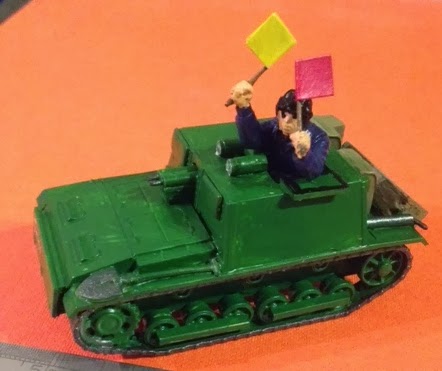 The crew figures are from a 1/35 set - either Italeri or ICM I think - of WW2 Soviet tankers. The signal flags were an irresistible addition! 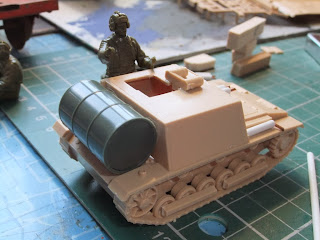 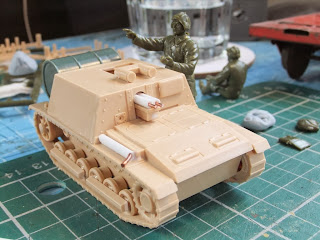 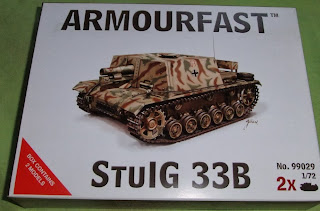 Great work Tim- I hate to think what gave you the inspiration to buy the kit with that in mind originally?

Pete
A warped mind? Divine inspiration? Spray paint fumes? All of the above?

An inspired conversion! It looks very convincing, and will certainly be robust enough to withstand many years of service.

Excellent, I's never have guessed it came from a 1/72 kit, did you mount the turret bit back to front or is that how it comes?

Bob Cordery
Not often one read the word ‘robust’ in connection with tankettes, but in this case I think you’re right.

Geordie
I think that particular god has plenty of reasons to be cross with me!

Brian Carrick
Both the superstructure and the track units are mounted back to front. So the back is now the front. Clear? Good.

Lovely and clever work. It's just so darned CUUUUTE!