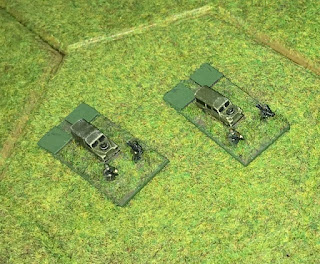 I painted these months ago but for some reason the photos weren't posted.  These are 1980s BAOR AAGW teams armed with 'Blowpipe'.  An expensive* combination of drainpipe and firework, Blowpipe seems not to have been a great operational success

(report by Tim Gow, poetry by John B & Simon W)

On Wednesday we were joined by the Admiral who entertained us with a haiku – as it turned out the first of many.  Cultural wargaming eh? 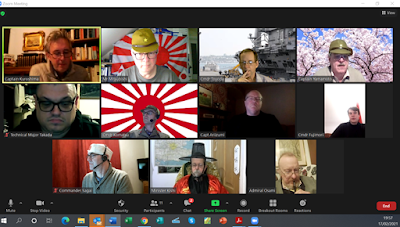 Once the Admiral had decided on a plan - to destroy the Pacific lock gate of the Pamama Canal – he recited another inspirational haiku.

On a bright spring mountainside

We shall smite our foes

We then executed the mission.  The plan was to use all four subs, three each with 3 bomb-equipped seaplanes and the fourth packed with explosives and with a hangar full of 10 manned torpedoes.  Each also carried a 10-man Marine party.  I’d originally hoped to have another two players at this point for the ‘walk on’ parts of the captains of I-402 and I-404.  The Admiral asked for volunteers at which point several players remembered urgent appointments elsewhere.  Capt. Yamamoto and Cdr. Fujimori eventually agreed to take the roles.  Cdr Sugai decided to command his Marines in person and sailed aboard I-400.  Majot Takada joined hist manned torpedoes on I-404.  Needless to say the Admiral’s sealed orders included a further haiku.

We shall overwhelm him

The enemy who lurks offshore 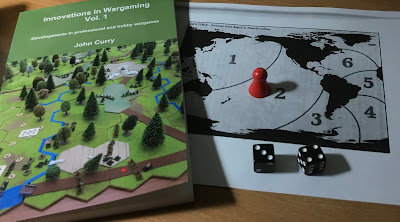 The mission was then resolved by a combination of dice rolls and umpire invention.

When the target area was reached, three subs surfaced and prepared to fly off aircraft and launch the Marines in their little rubber boats.  I-404, known by now as the floating bomb, carried on submerged.  A combination of mechanical failure and navigational errors meant that only five of the nine seaplanes approached the target.  One succeeded in bombing and setting ablaze a ship in the lock.  Two seaplanes were lost to enemy fire while more mechanical and navigation issues meant that only one was hoisted back aboard.  While I-402 was thus engaged it was spotted and sunk by US aircraft.  The Marines were something of a mixed bag.  One party blundered around and got utterly lost.  A second ran into a US patrol and perished in a hail of .30 cal fire.  The third heard this exchange, ambushed the patrol and after causing further mayhem took to the hills.  The last survivor is confidently expected to surrender in about 1974.

And what of I-404?  Having crashed gently into the lock gate, the Marine party secured the immediate area while Capt. Yamamoto came ashore trailing wires behind him, triggered the demolition charges and……nothing happened!  The courageous Captain returned to the sub and detonated the charges in person.  The subsequent bang warped the lock gate but failed to destroy it.  At this point Major Takada remembered the manned torpedoes still aboard I-404 and heroically exploded them, finishing off the lock.

Both I-400 and I-401 made it safely back to Japan where, as well as medals all round there was the inevitable haiku from Adm Osami:

Their honour is great

As with all such games it was made a memorable event by the enthusiasm of the players.  I will leave the last words to Capt. Kuroshima….

While friends shed their blood

I am with my geisha girl

As I write this it’s almost 11 months since I ran the first remote game for our Sheffield based group (& friends).  Since then we’ve managed a game (sometimes two!) each week since and seen a variety of games presented by at least ten different people.  For this week’s game I dug out Tim Price’s ‘Sen Toku’  - a committee game set in 1944 Japan in which the players have to plan and execute a dramatic mission with four of the huge new I-400 class submarines.  This game was first seen at COW some years ago and features in ‘Innovations in Wargaming Vol.1’ as published by the History of Wargaming Project.

Most of our regulars signed up and I drafted in a couple of ringers for special roles.  Players were emailed the briefings the day before and encouraged to bring silly hats and suitable flags. 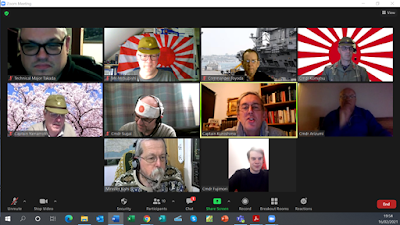 On the Tuesday evening - our normal session times are 1945-2115 – the committee met to discuss their options.  Capt. Kuroshima had devised a scoring spreadsheet which he used to evaluate the several plans.  He did mention later that it had been “hard work….” 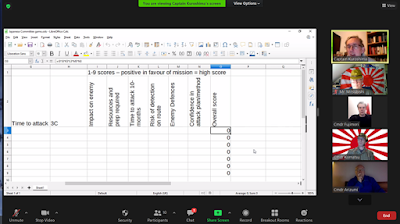 Coming next - enter the dragon Admiral 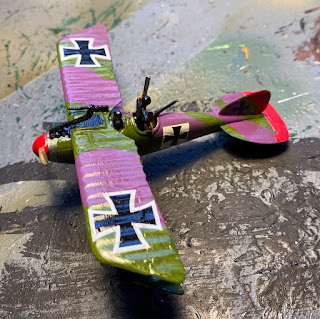 Here then is the completed Albadross.  I made up what felt like a suitable colour scheme - the decals are a combination of what came with the kit and from the decal box. 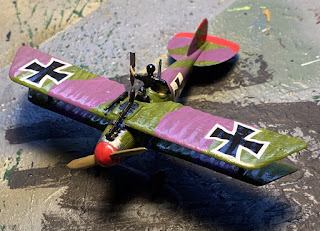 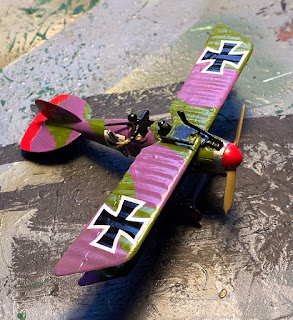 I'm particularly pleased with the observer.  He started off life as the dismounted motorcyclist from the Airfix Recovery Set and was obligingly already clad in crash helmet and gauntlets.  His right arm - previously stopping traffic - was angled down to grip the edge of the cockpit while his left was given a bomb (from a 1/144 scale kit) to drop on the wicked enemy. 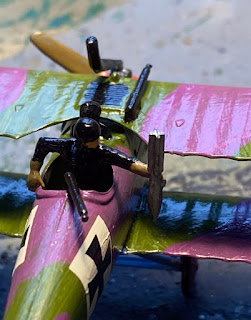 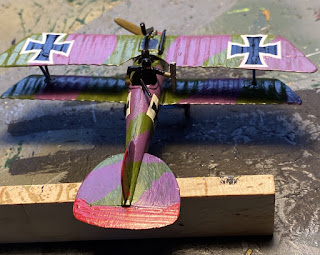