The year of 1964 saw four new releases - a number never repeated.
The first of these was the Tiger - a basic kit which nonetheless makes up into a very decent representation.  I have owned loads of them over the years and currently have half a dozen 'on fleet', together with a few of their younger counterparts from Fujimi and Dragon.
Next came the 'Bren Carrier & 6 Pounder gun'.  This is in fact a Universal Carrier and they infest my boxfiles in a variety of guises.


A further release was the 'Armoured Car 234'.  As is now well known, the sides (or mudguards) on this kit were actually based on the earlier Sdkfz 231 cars, and many have been converted into other versions of the 231/234 series.

The final release in this year was the Centurion Tank.  This iconic postwar British tank kit offered many conversion possibilities, but being primarily a WW2 gamer, at least in this scale, I never bothered with it much.  I did build one in the late 1970s but as is so often the case, it's fate is unknown.

Another 1/144 scale bomber now.  This Marauder came in the same batch as the Liberator I mentioned recently.  Again, I wanted to finish it as something other than a 'standard' US or RAF machine.  At around the time I was researching the B-24 markings I saw a mention of B-26s having been used by the RAAF.  I then came across a picture of an RAAF Mitchell in a rather striking plain green over black finish, and decided to use this scheme on the Marauder.

For the first time in many months, I have this weekend made some progress with my 6mm toys.  As usual, I have far too many projects on the go, and the Air Assault Brigade was started some months ago when I sorted out and assembled all the toys and sprayed on the base coat.
This unit has been put together for use with my NATO Brigade Commander rules, and will be based for use with my 'desert' Hexon tiles.  I will post further photos as progress is made.
This will actually be my third (and final?) AAB - the others having 'snow' and green bases.  The organisation of all three is similar - two para battalions and two air assault battalions in BMDs, together with company-sized units of AT, recce, artillery and AA.
The toys in this case are all from the GHQ range, the figures and heavy weapons being a mix of their Russian (W68 & W69) and 'Brushfire Warriors' (TW8 & TW9) - the latter chosen as they are wearing berets.
Posted by Tim Gow at 10:10 4 comments:

The batch of Japanese vehicles I built some time ago and finally finished last week included a Fujimi kit of a Type 97-Kai Shinhoto Chi-Ha.  This version had the longer 47mm gun, the short 57mm having been identified as inadequate for dealing with enemy armour.  Or dry paper bags. 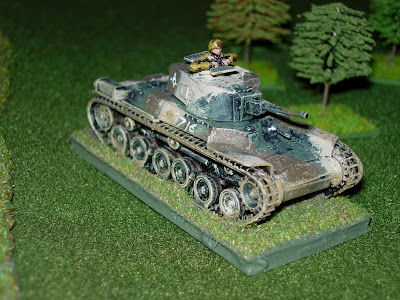 The Fujimi kit goes together nicely and is compatible in size with the Airfix offering.  I went for a later colour scheme - current from 1942 onwards.  The commander was a metal figure I had lying around but I may well replace him if I find a better figure.  I bought this kit cheaply at a show many years ago - one reason for it's low price being the absence of any tracks.  These were quire difficult to replace as the originals are quite narrow with a single central row of teeth.  The spares box offered no obvious candidates, but then inspiration struck!  I ended up using a single track from a Matchbox Panther.  This was quite wide and had two rows of teeth, so I (carefully) cut it down the centre line, cut to the correct length and ended up with a pair of tracks which fitted my Chi-Ha!  Think of it as a belated technology transfer from the Reich.
Posted by Tim Gow at 09:58 13 comments:

One of the models I did some work on over the Christmas holidays was this 1/144 scale Liberator model.  It arrived a couple of years ago as part of a batch of (already built but unpainted) models I bought at a show.  This is an old Minicraft kit and had been assembled to a reasonable standard.  I considered various colour schemes for this model, and already having several 'normal' USAAF B-24s, I fancied something a bit different - possibly with RAF markings.  Finding a picture of an aircraft of No. 547 Squadron, RAF Coastal Command settled the matter.  547 was based (in late 1944 at least) at RAF Leuchars in Fife.  Not only is Leuchars my 'local' RAF station (I grew up only about 15 miles away and attended several air displays there in the 1970s), but I know a number of people who have been stationed there over the years.

I mentioned in my recent post on Zeroes that I had a couple of 'specials'.  Here is the first - a burning wreck!

The second outing of C&C N again saw the Rolica scenario being fought - this time with John Armatys leading the British (& Portuguese) Army while Martin Rapier fought to retain the Peninsula for France.
Hopefully my previous post on C&C N shed some light on the game mechanics, so this report will simply highlight some incidents which occurred during the game.  For simplicity and consistency, I shall refer to left, centre and right sectors from the French point of view.   In many photos I have left the dice in view as they help to explain what is going on.


The following turn the same unit (now with a single stand and an attached leader) is again attacked.  The single stand goes and as that provided a further victory banner, the game ands immediately.  Just for fun, however, John rolled the 'risk to leader' dice, knowing that Wellesley would be safe on anything except a double sword...
I hope that I have conveyed the impression that this was a fun game - it was and is.  It was played by two players (one with very little knowledge of the mechanisms) and a bungling umpire in well under two hours.  Overall, the French dice were better than average, the British worse than average.  Apart from the massacre of the British light infantry (5th photo above), nothing uncomfortable took place, and even that event can be rationalised as being possible but very rare.  Importantly (for me at least), the game uses a single box of Hexon tiles and fits on a 5x3 foot table.
Those of you planning to use 15mm toys may care to note that those used in the game described (mostly based on 1x1 inch stands) were transported in a single boxfile.  The toys are all from my accumulation (sorry, but I can't think of it as a 'collection', from various manufacturers - mostly picked up at shows and ebay, with some (including the French Hussars) painted for me by Steve Briddon.  The 'Portuguese' came out of the 'Saxon' box, and one of the 'British' guns is in fact from Brunswick.
I look forward to playing (and reporting) more C&C N games.
Posted by Tim Gow at 15:17 4 comments:

The Type 97s (and some other Jap vehicles) are now finished!  The Airfix Chi-Ha was a kit I recall building (badly) in the late '70s.  That original is long gone, but following a burst of activity I now seem to have quite a fleet of Japanese tanks.
That's it for the Airfix Type 97s, but photos of more Japanese tanks will follow.
Posted by Tim Gow at 22:05 6 comments:

After I had opened my newly arrived copy of Command & Colours Napoleonics and had a quick flick through the rules, I set up the first scenario - Rolica - using my Hexon terrain tiles and 15mm toys and played through a few turns.  A photo of the general setup appeared in an earlier post.  Although I got a number of things wrong on this run-through, the game did have a nice 'feel' to it.  The components - cards, reference cards, rulebook etc) are of very high quality and there are a number of tweaks specific to the Napoleonic period, including infantry squares and cavalry retiring and reforming.  There are also a number of differences between troops of different nationalities - for example British infantry musketry is better then French, but the Frenchies are better in melee, and so on.﻿