The highlight of the weekend's emails was from GHQ and told of their new release plans for the coming year.  I have edited the list to just the 1/285th scale (6mm) items which I present below for your interest and edification.

My GHQ stuff these days all comes from the ever obliging John Skotulanski at Wargames Emporium. http://www.wargamesemporium.co.uk/   Going by this list I reckon he stands to take an extra £100 or so from me in the next 12 months...

Where appropriate I have commented on the new models. 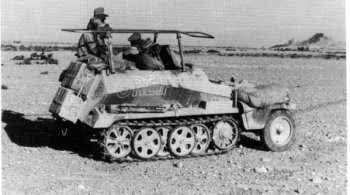 August 1914 - The Battle of Gumbinnen

This was another Great War 'Ostfront' game fought with Richard Brooks' OP14 rules.  Historically the battle at Gumbinnen followed 3 days after the messy scrap at Stalluponen (see earlier posts).  The payer briefings were as follows:

Our invasion of East Prussia is under way. The Germans have launched fierce attacks on our French allies (by way of Belguim). War Plan 19 is two two-pronged. Rennenkampf's First Army, of 200,000 men, entered East Prussia from the north while General Samsonov's Second Army invaded from the south.

III Corps has already fought and driven back the Germans. XX Corps marches to it’s north and IV Corps to the south. Before you lies a flat plain punctuated by Gumbinnen (some 20 Versts to the west of the frontier).
German forces are reported as second line, reserve troops and are of course, hugely outnumbered by the Russian steamroller.

Clear the area of German troops.
Secure the towns of Gumbinnen and Goldap.
Control the railway lines.

All forces begin on table and may be in deployed mode.

XX Corps
Begin up to 4 hexes from the eastern edge, no further south than Gumbinnen.
HQ
2 Divisions, each 2 brigades
1 artillery brigade (4)
1 howitzer brigade (2) – only if a red card is drawn
III Corps
Begin up to 3 hexes in from the east, south of the Gumbinnen to Stalluponen (due east) railway.
Orbat as above but no Howitzer Brigade.
IV Corps
One division begins within 2 hexes of Goldap, the other within 2 hexes of the appropriately-named Klauten (the village to the north of Goldap).
Orbat as per XX Corps.
Cavalry regiment (1 stand)
Begins the anywhere on the northern edge of the table. Comes under the orders of XX Corps.

Russia's planned invasion of East Prussia - which comprised a major component of their pre-war strategy, Plan 19 - is two-pronged. Rennenkampf's First Army, of 200,000 men, has entered East Prussia from the north while General Samsonov's Second Army invaded from the south. The town on Gumbinnen is 30km west of the frontier. Your three corps are in and to the south of Gumbinnen.

You have been ordered to attack the advancing Russians in order to defeat Rennenkampf before the arrival of Samsonov from the south. The enemy is (inevitably) thought to vastly outnumber the Fatherland’s available forces but a determined and swift attack will achieve local superiority.

Destroy or force the withdrawal of at least 2 enemy Corps.
Secure and hold Gumbinnen and it’s railway to the west.

Elements, 8th Armee (all begin in march column)
I Corps
Start in or north of (within 2 hexes) Gumbinnen.
HQ
2 Divisions each of 2 brigades
2 artillery brigades (2)
1 howitzer brigade (3)
XVII Corps
Enter on turn 4 at point A.
Orbat as I Corps
I (Reserve) Corps
Enter turn 7 at point B.
Orbat as I Corps but no Howitzer Brigade.
Cavalry Division
Enter turn 2 on northern edge of table, D6 hexes from western corner.
3rd (Reserve) Division
Roll D6 needing a 6 for arrival on turn 6. Roll until arrival – score required decreases by 1 each turn. Enters anywhere on the western edge (decide before start of game).

It may be possible to call upon aviators to assist in locating the enemy.

On wednesday night Martin Rapier chose to drive the Russian steamroller while I commanded the Germans.

In the 'photo Gumbinnen can be seen centre left.  Goldap is just off-camera to the right. 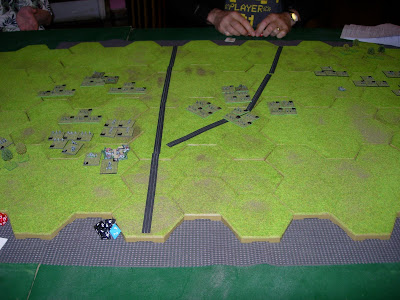 Von Francois surges forward before dawn - only to meet hordes of Russians coming the other way! 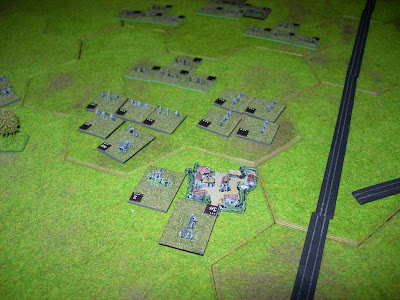 The German position begins to deteriorate as the second Russian Corps closes for action.  All photos were taken from the German side of the table - I couldn't be bothered getting up. 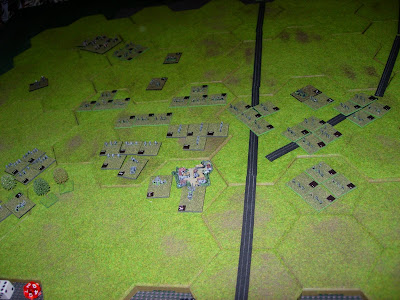 The Germans are reduced to a single brigade west of Gumbinnen while only the artillery occupies the town.  Meanwhile the second division sent on a cunning flank march (left) dithers.  The dashing Von F has retired to have his shrapnel wounds dressed... 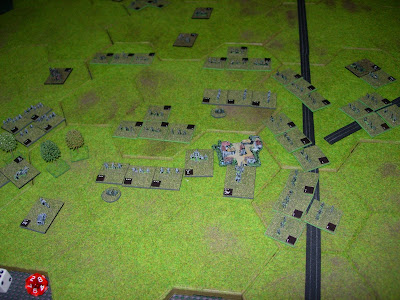 Below:  The Russian noose tightens around Gumbinnem 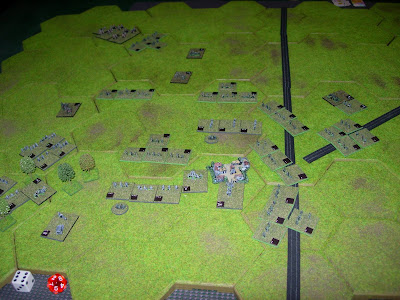 Von F's Corps finally succumbs to exhaustion while in the distance the inconclusive scrap between the German cavalry and a Russian division continues.  Meanwhile elements of the German XVII Corps begin to arrive (bottom right). 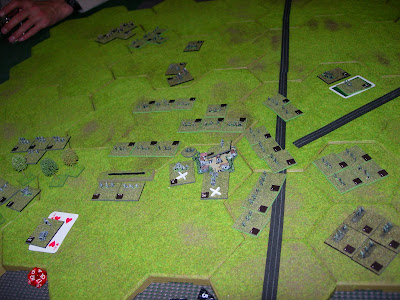 XVII Corps get stuck into the Russians.  For those with decent eyesight, the rears German stands are edged in grey, the Russians in green. 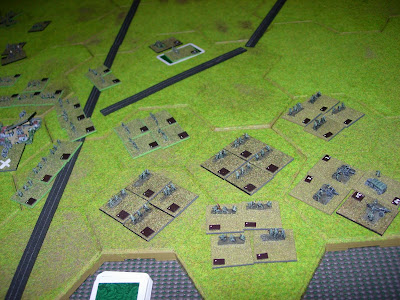 The Gumbinnen defences continue to crumble. 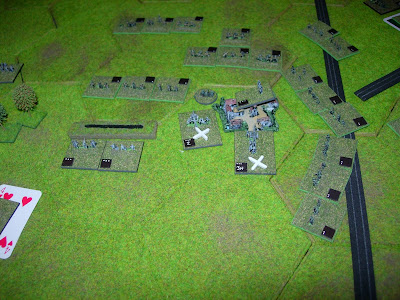 The Russian III Corps begins to crumble (note the exhaustion card under the Corps HQ). 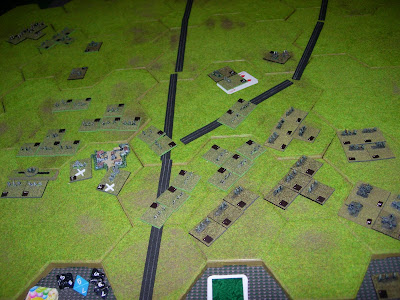 Ther German reserves push on as air support (spotting for the guns) finally shows up. 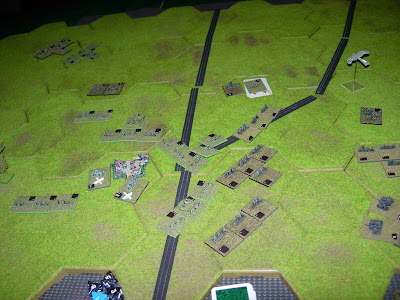 The aforementioned contribution from the German Air Service. 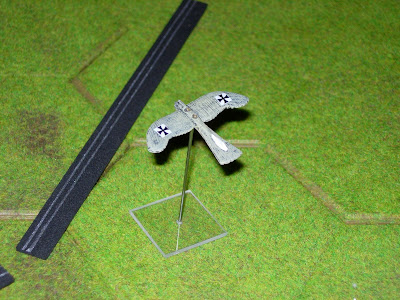 What, you may ask of the action furthet to the south (near Goldap)?  We dicided that as time was pressing by the time the third German corps appeared that they and the Russians in Goldap would occupy each other.
In Conclusion, we dicided that the game was an honourable draw.  The Russians had captured Gumbinnen and Goldap and seen off Von F, but the Germans had worn out 2 Russian corps.  Historically, it was tnews of the German reverse at Gumbinnen which finally broke the nerve of 8th Armee command and led to the appointment of Hindenburg and Ludendorff.  The rest, as they say, is history...
Posted by Tim Gow at 17:29 2 comments:

I have just spotted this on the BBC Radio7 website.  I've not listened to it as yet (althought I recall hearing it a couple of years ago), but the programme tells the story of inventor Geoffrey Pyke's plan to build a large aircraft carrier from ice!  Hallmark did a model of this in 1/6000 (it's still quite a large model, even in this scale) which I really must paint sometime...

While painting yet more 6mm WW1 Russians on Saturday afternoon, I listened to the Saturday Play on BBC Radio 4.  'An English Tragedy' by Ronald Harwood starred Derek Jacobi and proved to be very interesting.

May 1945: victory in Europe, and a Labour landslide. English traitor John Amery is arrested in Italy and brought back to London for trial. If convicted, he faces the death penalty. But his father is a senior politician; surely the Establishment will look after its own...

The play charts the weeks leading up to the execution, following John's arrest in Italy and trial in London. Like a real-life Sebastian Flyte, he clutches his teddy bear, lies, boasts and jokes as the day of execution draws inexorably nearer. Meanwhile his distraught parents try everything in their power to save him.

John Amery was the Harrow educated son of Churchill's Secretary of State for India, Leo Amery. His brother Julian was later to become a prominent Conservative MP. A troubled man, who had been expelled from Public School and bankrupted as a young entrepreneur, John became a passionate fascist. He broadcast pro-Nazi propaganda during World War 2 and ran a programme recruiting British POWs to fight for Germany on the Eastern Front. Unlike his brother Julian, John was a wild boy - bisexual, hedonistic and unstable. Why?

The play is available on the BBC's 'listen again' facility for the next few days at http://www.bbc.co.uk/iplayer/episode/b00s7vrf/Saturday_Play_An_English_Tragedy/
Posted by Tim Gow at 12:41 No comments:

The Chickens have landed...

The latest additions to my household arrived on Sunday 2nd.  They are three Silkie Chickens and are providing us with entertainment and eggs.  In that order. 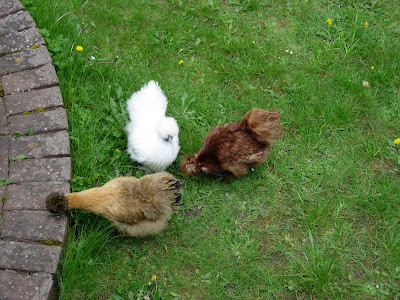 The white one is (inevitably) called Fluff, the red (on the right) Shelly (think about it...).  The handsome gold coloured creature goes by the name of von Kluck.  Sorry but I've been reading a lot about 1914 recently. 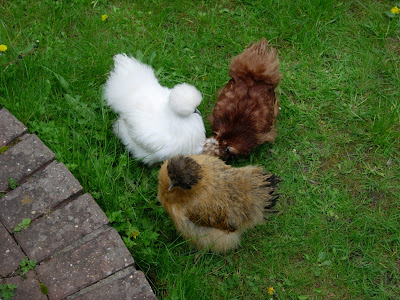 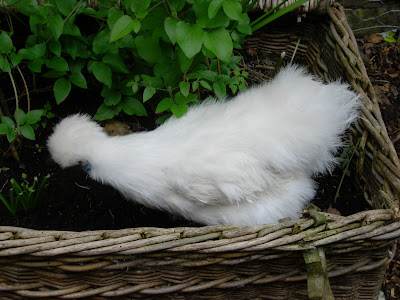 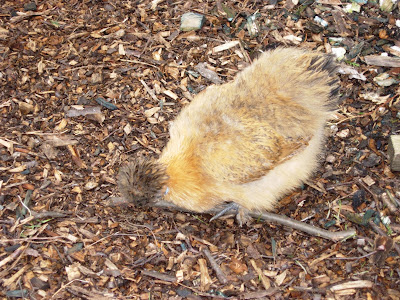 Shelly checks out the scenery. 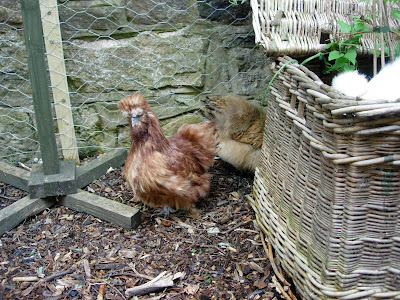 Email ThisBlogThis!Share to TwitterShare to FacebookShare to Pinterest
Labels: Chickens

August 1914 - The battle of Stalluponen (yet again)

This was yet another refight of Stalluponen (other battles are available) played at the Sheffield club with Nick Mitchell as the pointy-helmeted Germans and Martin Rapier as the flat-capped Russians.  A bit of role reversal there.  The very cautious Germans began the game mostly deployed (due to my having drafted a lax briefing).  Here they are in and around Stalloponen. 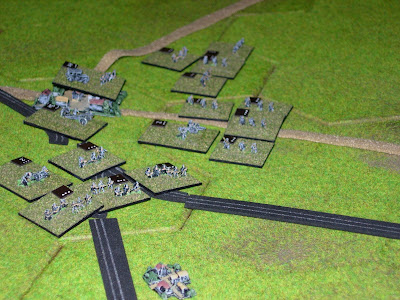 As news broke of the Russian advance the Germans moved out (slowly) to meet them.  Although these chaps look like the toys in the earlier reports, both sides were new figures bought (with many others...) from Irregular at Triples and subjected to my usual hasty paintwork. 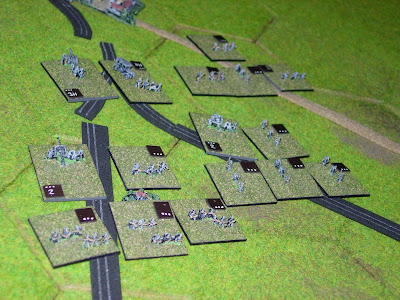 The battle lasted until nightfall and consisted of various attempts of each side to outflank the other until they ran out of room and had to fight.  In the afternoon the Russians stunned the watching world by an early use of aircraft.  Their Morane N (seen here overflying the Russian Corps HQ) actually managed to conduct a strafing attack on a German brigade! The players were encouraged to request aeroplanes as I'd painted a couple...   (Morane model by Heroics and Ros). 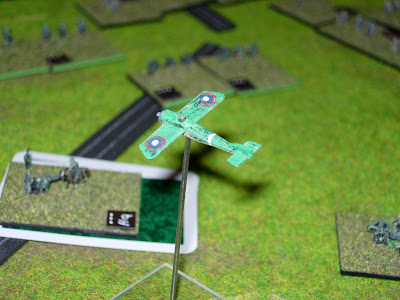 The end.  The Russians had the worst of the slogging match, with German weight of artillery being a decisive factor.  The Russians sloped off as night fell, no doubt traumatised by the German use of a flying artillery spotter!  (Taube aircraft by H&R) 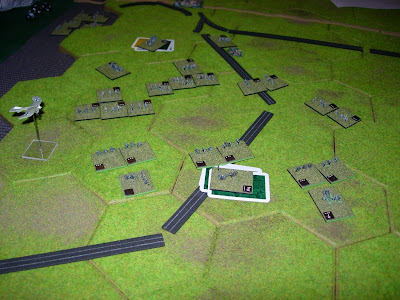