Ill Metz by moonlight - The Battle of Colombey-Nouilly, 1870

The Battle of Colombey-Nouilly took place during the Prussian advance on Metz on 14 August 1870.  The game was played at the Sheffield club using Martin Rapier's 6mm toys in late 2010.  I can't really remember very much about the game, except that the Prussians had quite a hard time of it overcoming the dug in Frenchies, so I have captioned the photos as best I can.

This is the final post looking at my 'modern' (1970s-1990s) Japanese forces, and now we leave the ground and take to the air, firstly with three aircraft from the Japanese Air Self Defence Force (JASDF), followed by a couple from the JM(aritime)SDF.

The first Forbodian artillery crew is now complete - here they are ministering to the needs of a Britains 4.7in Naval Gun. 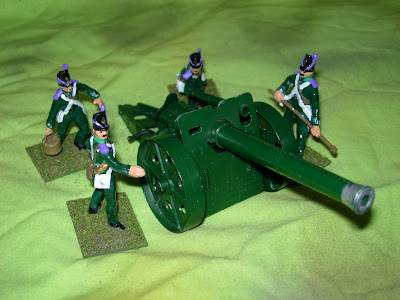 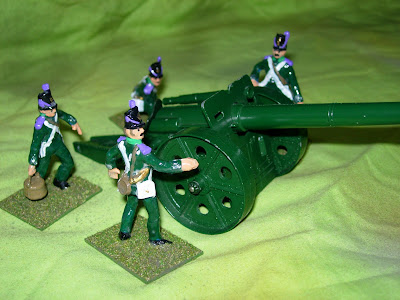 I have made a bit more progress with the Funny Little Wars project.  Having acquired a number of guns I felt that it might be a good idea to have some gunners!  I therefore bought a box of A Call To Arms British Napoleonic gunners - 16 figures in four poses - and started by taking one of each pose.  A few minor modifications were made - so the 'match' was cut of of the gun captain's (below right) had and the ramrod held by another figure cut down to make it less obvious that he's about to swab out a smoothbore cannon.  I decided on a uniform of overall green with white cross-straps and purple trim.  The prevalence of purple on the uniforms of the Forbodian military stems from the claim of the present King's grandfather, Boris the Bonkers, that he is descended from the Emperors of Rome.  Nero most probably.
Posted by Tim Gow at 22:38 No comments:

Just back after a few days away - Sara and I have spent this week in Bath - Somerset's answer to Perth.  As a result, you will have noticed that new posts have been a bit thin.  Anyway, I am now back and what passes for normal service is hereby resumed.
As well as the 'normal' tanks and APCs mentioned in earlier posts, I made sure that my Japs were tooled up with various bits of kit which go 'bang' or 'whoosh' quite loudly.  Most of this is in fact US-produced and even better, I already had much of it 'in stock'.
That's it for ground forces (for the moment at least) - next time we take to the air - with a few surprises!
Posted by Tim Gow at 14:05 6 comments:

Over the last 24 hours I've been hearing about the earthquake in New Zealand.  I know that I have a number of readers and followers in that country and just wanted to let you all know that I'm thinking of you.  Hope you are all safe.
Posted by Tim Gow at 16:48 2 comments:

I came across this site while looking for MERDC camo references recently.  While the information it contains is quite widely available, it is useful to have it all on a single website.  Enjoy.

More of my 'modern' period Japanese forces now, with some photos of tanks & recce.  After experiments with M-24s in the '50s, the first indigenous tank was the Type 61 which looks a lot like a slightly scaled down M-47.  This was followed by the sleek (in an AMX-30 sort of way) Type 74 and more recently the Type 90.  Sadly the pics of the Type 90 did not come out at all well, but to my eyes it looks very much like an early Leopard 2.
Next time - artillery and AA vehicles.
Posted by Tim Gow at 00:40 2 comments:

Following on from the report of the game set during a fictional invasion of Japan in the '80s, I dug out my Japanese forces and had some of them pose for the camera.
Inspired by one of the crazy impulses we wargamers suffer from I bought a load of Japanese models from Scotia (http://www.scotiagrendel.com/Products/index.php?main_page=index&cPath=4_23&zenid=99f8b374eee83f139fa379bb89920765) a few years ago and surprisingly, painted tham all within a short period of time.  A few words about Scotia for those of you unfamiliar with the make.  While the detail of their models generally falls some way short of GHQ or CinC, they are far cheaper, and in terms of both quality and price are on a par with Heroics & Ros.  The reason that I have so many Scotia models is that their range includes many models unavailable elsewhere.  As well as the Japanese, most of my South Africans are from Scotia, together with significant portions of my Arabs, Russians (especially engineering kit) and Gulf 1 UK & US troops.
Next time - tanks and armoured cars.
Posted by Tim Gow at 10:27 14 comments:

More news from Forbodia now.  I decided on a colour scheme of dark green with purple trimming and a pale green shirt.  Although the figures are nicely detailed, the thick coat of PVA tones it down and makes it easier to achieve a 'toy soldier' paint effect.  I started with a small batch of five chaps (I was also painting four gunners at the same time) so as to avoid the feeling of being overwhelmed by the size of the task! 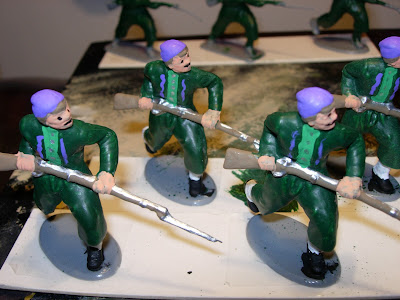 The next job is to varnish them - at least two coats - then stick them to individual bases.
Posted by Tim Gow at 08:01 5 comments:

While looking for some other photos I came across a number of pics of this game, played a couple of years ago using my NATO Brigade Commander rules.  The scenario, set during the early stages of a fictional war in the mid-1980s saw a small Japanese force tasked with defending a stretch of coastline in anticipation of a Soviet (remember them?) amphibious landing.  The Japanese commander was in charge of an infantry battalion (in wheeled APCs), a recce squadron (Type 87 armoured cars) and an experimental AA missile battery.  The AA battery did not in fact have any live missiles, and although these were due to arrive by air, the Japanese commander was not to allow the new system to fall into enemy hands.  As far as I can remember, the Japanese objectives were to defend the two factories.  Reinforcements, including a tank battalion were available and would arrive randomly following any Soviet landing.
Soviet forces consisted of an understrength Naval Infantry Regiment, together with an Air Assault Brigade.
Posted by Tim Gow at 06:54 17 comments:

My thanks to Wg Cdr Luddite for sending this week's link.  Remember these 'exploded' views you get in plastic kit instructions?  Well have a look at this:

As part of my ongoing Funny Little Wars project, I decided that it was high time I painted more infantry.  Readers will recall that I have painted one small unit so far (the Palace Guard) for my fictional country of Forbodia.  Regular readers will no doubt be shocked to learn that a certain amount of toy buying has taken place over the past few weeks, and although the Forbodian Army is far from complete I have toys for parts of at least two other armies...  One is never enough.
While casting around for suitable toys I had a look at the ACW Zouaves made by HAT and decided that they would be suitable for the obscure Balkan principality that is Forbodia.  As Zouaves would also fit into a French-style army (or as H.G.Wells would have it, 'Army Horizon Blue') then I could justify buying quite a few of them.
HAT actually produce two different sets of Zouaves, with 16 or 18 figures in each, so I bought three of each.  This enabled me to achieve some degree of uniformity in terms of poses and will give me four 20-figure battalions (at least one for Forbodia) plus 'spares' to be used as gunners, staff officers, medics etc.
So far the figures have been sorted into units and the chaps who will form the Forbodian Jagers have been cleaned up a bit (there was very little flash to remove), washed to de-grease them, and stuck (using double-sided tape) to temporary card bases.  Next comes a liberal coat of PVA to provide a paintable surface.
Posted by Tim Gow at 16:11 4 comments:

As I mentioned in my earlier post 'Landships', my WW1 tanks were painted very quickly for use in a game.  I can't remember much detail of it so I'll let you try to figure it out from the photos.  To save your eyes, there are no fewer than 19 tanks on the table at the start of the game!  My three are in the middle (identifiable by the white/red/white flashes on the front).  Those at the far end may look like 15mm toys but they're just far away.  Honest.