When putting together the series of posts in February this year about my 6mm 1990/91 'Gulf War' toys I decided to re-run some of the games from this period.  The Khafji game was last played a couple of times in 2008 so memories of it were to say the least, somewhat hazy.
In late January 1991 elements of the Iraqi III Corps crossed the Saudi border and occupied the almost deserted port of Khafji.  Iraqi forces defending Khafji are a reinforced motor rifle battalion and an artillery battalion.  A tank battalion is available to reinforce.  The force assembled to recapture the town consists of a Saudi National Guard (SANG - actually professional soldiers) Brigade with artillery and tank support.  A flight of USMC AH-1W Cobras is on call.  To add to the fun, hidden in Khafji (and unknown to the Iraqis) is a USMC artillery spotting team, with a couple of batteries of 155s on the other end of the line.
The game used my NATO Brigade Commander rules  each hex is 1km across and each stand represents a company.

The Saudis got victory points for capturing Khafji town hexes and the Iraqi VPs were awarded for holding Khafji hexes and eliminating Saudi battalions.  On points therefore, this hard-fought game was a narrow Iraqi victory.  Martin is already calling it 'The Mother of all Battles'.  I really can't think where he picks up these expressions....
Posted by Tim Gow at 11:54 10 comments:

No - not a holiday, though as I type this with the rain battering the windows it is an appealing thought.  My visit to Northampton last Monday 'happened' to coincide with the local wargames group night.  The game was run by Trebian using his 'Send Not To Know' rules (see his own blog for more on this system) and used 15mm toys and terrain from his collection.  Our host for the evening was Ian R-L who was assisted in the key Republican activities of church-burning and factional in-fighting by Richard L.  The cause of law and order was represented by your humble correspondent - together with Phil S.  Yes this one.

On Monday I visited a friend near Northampton.  To conceal his true identity let's just call him Trebian.  As he had been heavily involved with the design of the 2012 Society of Ancients game 'Call it Qids', Graham, er I mean Trebian was keen for me to try it out.
The game aims to recreate the Battle of Kasesh (1274BC) between the Egyptians under Ramesses II and the Hittites under Muwatalli II and features loads of 6mm toys - mostly chariots, an over scale Pharaoh and an almost unbearably cute fort.
This game will be at a number of shows throughout 2012.  If you see it, give it a try.

After one of the recent Fletcher Pratt games I ran at the Sheffield club I was approached by Richard Hawes, a fellow club member.  Richard told me that in the late 1970s/early 1980s his father, John Hawes had scratch built a number of warships in 1/1,200 scale.  Was I, asked Richard, interested in seeing them with a view to using them in games?  I leave you, gentle reader, to guess at the degree of enthusiasm I displayed on hearing this news.
The following Wednesday, Richard turned up with a number of boxes and invited me to inspect the contents.  He then suggested I take them home for a proper look.  This generous offer led to me spending a jolly hour the following Saturday in my garage being ever more astonished at the treasures the (rather dusty) boxes contained.  The photos below were taken during that inspection and are no doubt already having the same effect on readers of this blog.

I have now carried out a closer inspection (and done a lot of gentle dusting!).  Virtually all of these are made from balsa wood and plastic rod - the latter particularly delicate.  Some ships (particularly light cruisers) are rather overscale but hell, who cares?  I was (and continue to be) completely blown away by this collection - so much so that after further negotiations I am now the fleet's proud new owner.  Quite by coincidence, Richard's collection of 15mm figures has also grown considerably.......
More on this stunning acquisition as I repair (and use) the models. 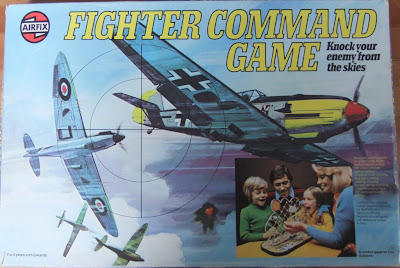 After one of our nostalgic discussions at the Sheffield club I dug out this venerable delight from the attic and took it along last Wednesday.  I have owned this game sine new (1976!) and it is still a pretty good simulation.  I officiated while John and Martin offered their impersonations of Goering and Dowding respectively.  Sadly the rules disappeared years ago (does anyone have a copy?) but I remembered enough to get us through it - after all, we are definitely in the "ages 8 and up" bracket....

Yesterday I was able to to do a bit more work on the pointy horror.  The silver paint was brushed on over the matt back base coat and a single application produced what looks to me like a suitably scruffy look.  The enormous AA missiles were treated to bright red nose cones - completely wrong but somehow irresistible!
I managed to find a suitable pilot in the spares box - a metal figure of unknown origin - and after shortening his legs was able to make him fit.  The rather basic decals are the ones supplied with the kit and look OK. 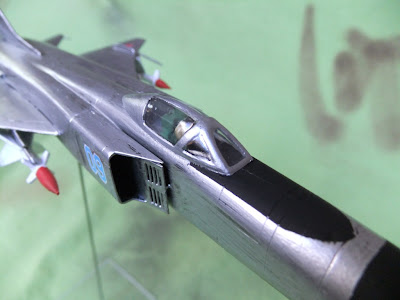 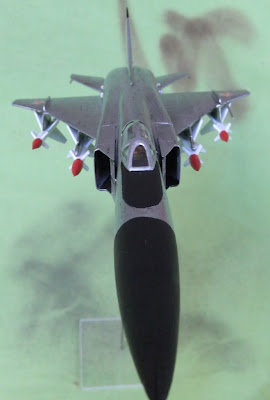 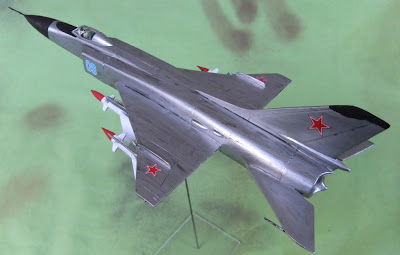 I shall try to find gainful employment for the Sukhoi in a game.  Inspiration will strike eventually.  At least I hope so - I still have another to build....
Posted by Tim Gow at 12:07 8 comments:

Ten Rounds Rapid (or Space Invaders on the Marne?) 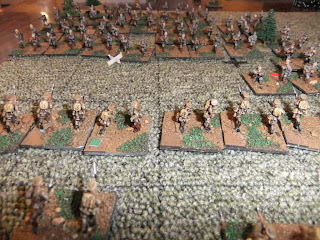 This was a quick play test of a game Martin has been working on recently. In it, the player(s) runs a British battalion being attacked by the field grey hordes (an entire regiment of them) in August 1914. The Brits start deployed as per their pre-war doctrine with a firing line, support line and reserves. The players job is to blunt the German attack by managing his resources - manpower and ammunition. To add to the fun, once deployed on table, troops may not move to the side, but only forward (or back).
The game went well, lasting for about 45 minutes and a subsequent discussion produced a couple of ideas which might streamline it a bit.
All the toys were from Martin's 15mm collection. He ran the game while I commanded the Brits. 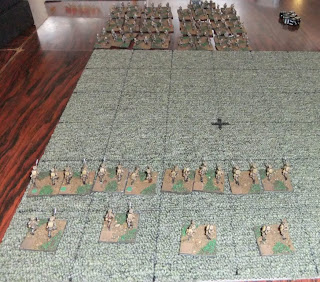 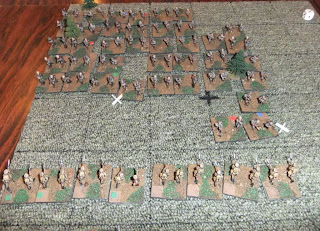