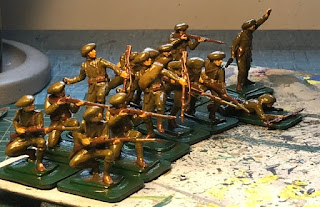 Slightly better photos of the finished figures. Now read on.....

Despite the disruption caused by Covid-19, I am continuing to plan and prepare for this year’s games. For the Sevastopol 1942 game I wanted to have some Romanians available and as no specifically Romanian figures are available, a gentle ponder was required.
I decided on bodging some mountain troops and used the Hat/Waterloo1815 WW1 Italians as my starting point. I trimmed down the helmets and added Milliput berets. You can find a lot of issues with the result but I purposely kept the figures rather vague as they may be called upon to serve as various other khaki-clad beret wearers. Spaniards and Belgian Chasseurs Ardennais spring to mind.

A bad photo of the finished figures. 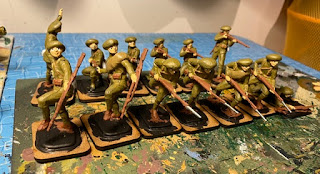 Nice little conversion, I done the same for my Greek mountain troops!

Tradgardmastare
Thanks - they’ll do the job!

Bluewillow
We need photos of your Greeks!

I must say they look a very jolly bunch! As more of us are confined to working from home, I can’t help feeling that Wargames, especially solo war gamers, will adapt quickly! I plan to resource my FaceTime Wargames, using iPad, tripod and iPad clip at either end. It’s great fun, did it for a couple of years with my late much missed wargaming chum Steve Sykes. On alternate Sunday afternoons, he would host the dba game from Shropshire, then I would reciprocate with a ww2 one hosted at my end. You can also introduce “fog of war” by sending over an “aerial photo” in advance (dicing shot obviously), and at the start of the game gave the iPad camera placed at a height that I used to call “Lionel Tarr periscope elevation”. Lots of more ways of using the iPad video camera approach to create more fun, we enjoyed it immensely, meant we were able to hold weekly Wargames as though we were both in the room, even though we were hundreds of miles apart! Think quick play rules and relatively small tables. Wishi could add an old photo!

Funnily enough I was thinking of converting my SCW beret wearers into Rumanian mountain troops on a needs-must basis by painting their hats khaki.

Italians would make decent subs for Rumanians, as would SCW troops in the oval helmet.

Who knows, one day we might be able to meet up again to actually play with these!

Geordie
So you are proposing a morale system based on how much Milliput the figure has on its head? Well, we’ve all come across sillier rules....

Martin Rapier
I’m sure face to face games will be back on soon!

Hi Tim, I can let you have some of the Hugonnet figures I'm using if you need to vary some poses or beef up the numbers, their size varies a bit but most are about 60mm so I'm not sure how well they would fit in with your chaps.

Brian Carrick
That’s a very kind offer Brian - and if ever we’re allowed to meet up I’ll take you up on it!

Pete
Thanks - not bad for a quick bodge.