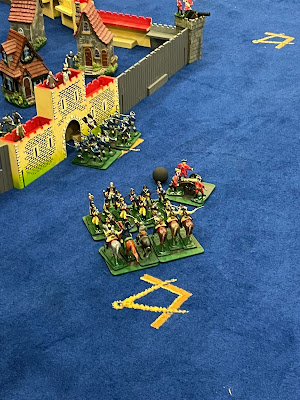 The Duke's cavalry soon had the Markgraf's advance forces under pressure.  At least the heavy regiment did - the light cav rgt twice refused orders to charge!  The infantry - shot up by artillery just before the charge - didn't enjoy the experience and were soon in flight. 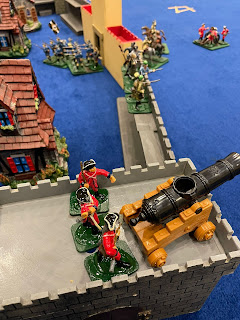 On the town walls, gunners prepared to unleash a withering hail of fire.  This was by far the heaviest piece.  Big, isn't it? 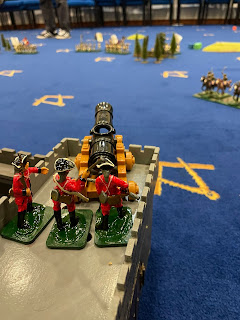 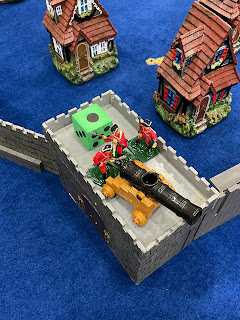 Sadly the gunners weren't awfully keen.  A roll of 1 meant it wouldn't fire this turn.  The Markgraf's dice rolling didn't help - I think this gun only managed to fire three times during the day! 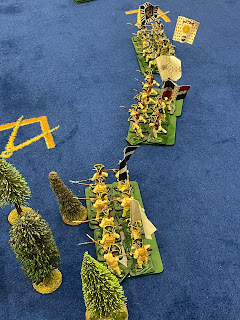 Some of the Duke's many infantry regiments advancing. 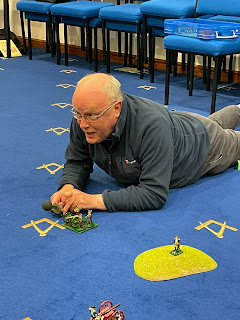 Incoming!  Col. Levassor directs the fire of one of his many artillery batteries. 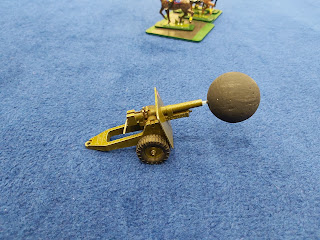 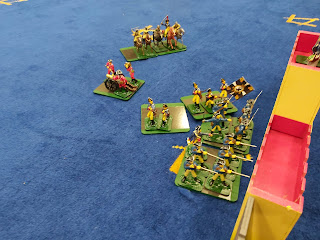 Col Bogward's infantry trying desperately to get back through the gates to safety. 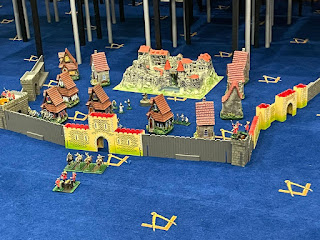 Having seen off the infantry, the remaining cavalry troopers turned on and overran the gun battery 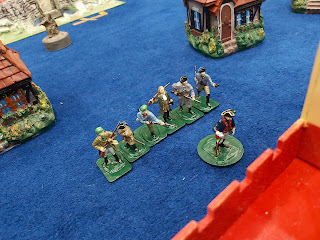 In town, the militia was assembled under the Markgraf's watchful eye. 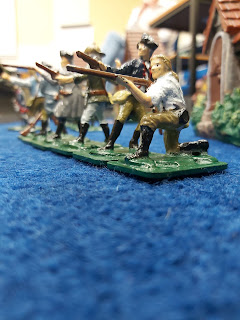 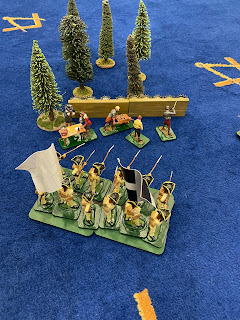 Directed by expert engineers, the Duke's forces were soon digging.  A lot of digging.  And not all of it visible.  We then 'fast forwarded' through a few days of bombardment and digging. 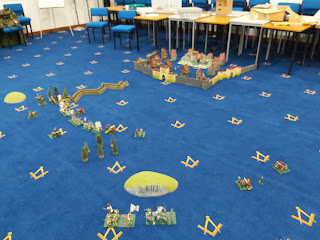 In time, a zig-zag of saps reached out to the town walls... 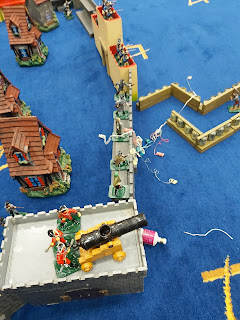 ...and eventually reached them.  As the Duke's infantry rushed along the trenches, a might explosion rocked the wall.  OK, it was a party popper and we all shouted 'BANG!' A section of the wall then collapsed.  As well as digging the sap, the engineers had been digging a mine! 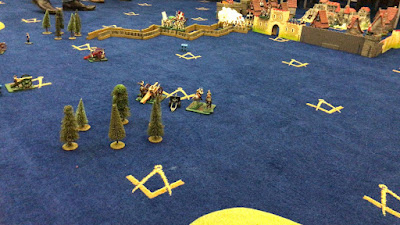 A distant view of the trenches and explosion. 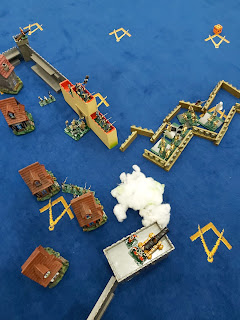 As the Duke's infantry surged through the breach and cleared the walls, the remaining militia and citizens fled into the keep.
At this point we had a chat about what would happen next.  It was agreed that the Duke's forces probably lacked the time to reduce the keep and would instead content themselves with slighting the town's walls and carrying off or spiking the guns.
A most entertaining day of gaming.  Thanks to all the players and in particular to Pete and Russell for the use of their photos.
If you want more info about any of the toys please let me know in the comments.
Posted by Tim Gow at 15:09

54mm glorious fun packed action in technicolour!
What is not to like?
Great looking game!

Still I think I should not be allowed anywhere near that heavy gun again.

Excellent looking game Tim! I especially like the look of that "cannon ball," quite devastating!!

Funny Little Wars
I'm sure more such nonsense will be forthcoming.

Geordie
I had the original woodcuts of the action colourised just for you.

Peter
I think all participants were helpless with laughter at least once during the day.

Pete
It may well be that your not inconsiderable talents are best employed in areas unrelated to heavy artillery!

Brad DeSantis
Cannon firing was, as always, a highlight of the game!

I half expected to see Baron von Munchhausen sat on the cannonball :-)

Chris Kemp
Rule nothing out Chris!