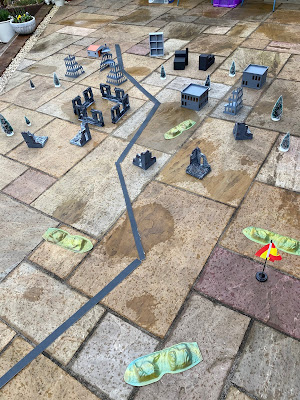 For the first outdoor game of 2021 (and indeed 2020!) I finally presented the battle for the University City area of Madrid.  Being restricted to gatherings of no more than six people I had duly invited five players to share the experience. The report of the game will run to several posts.  This first will present the briefings and set the scene.  The second post will include the individual briefings for the main Republican characters and subsequent posts will gradually reveal the whole sordid tale of the battle.
The photo above shows the field of battle from the Nationalist end.  I have found that in outdoor games, no matter how many buildings you have, they soon disappear into the space available.  To get round that issue I decided that roads aside, if a paving stone had a terrain piece, it was assumed to cover the whole stone.  The largest of the stones is 3 feet across.
After a cold week, the forecast for Der Tag was dry but predictably as soon as I'd laid out the terrain the rain started.  Happily it didn't last - nor did a further shower early in the afternoon.  Some of the players were surprised by how relaxed I was about the precipitation but that's why the toy soldiers get two coats of varnish!
Martin and Simon were the Nationalists, Lloyd, Jerry and Russell the Republicans.
All photos in this series by me unless stated - my thanks to the others for allowing me the use of their camera work.
All players were given the same general briefing:

THERE IS NO FRONT – MADRID IS THE FRONT(1)

“Here in Madrid is the universal frontier that separates liberty and slavery.  It is here in Madrid that two incompatible civilizations undertake their great struggle: love against hate, peace against war, the fraternity of Christ against the tyranny of the church… This is Madrid.  It is fighting for Spain, for humanity, for justice, and, with the mantle of it’s blood, it shelters all human beings!  Madrid!  Madrid!”(2)

The liberation of the capital is near.  Madrilenos should keep to their houses which “our noble and disciplined troops will respect.  We shall know the guilty and only upon them will fall the full weight of the law.”(3)

It is November 1936.  Nationalist forces have advanced to the north-western outskirts of Madrid and are pushing through the University City area.

The Nationalists must seize and hold as much of the city as possible.  The divided Reds will soon collapse in the face of your professional forces.

The Republicans must expel the fascists while holding together a united – would it be tempting fate to say ‘popular’ front. 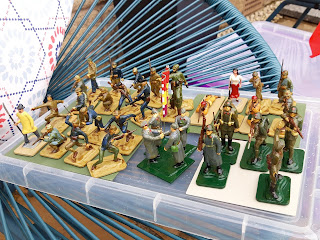 Republican troops massing for battle - both these photos by Martin Rapier 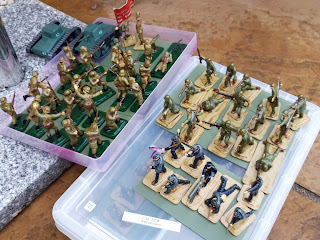 I look forward to reading your battle report?

No Pasaran! It look great. I shall follow and pinch the scenario.

Bravo! Delighted to see the game

Thank you for setting the scene so thoroughly! It is great to see a game outside, it has been a long time! I can't wait for the next installment!

Many thanks to Tim for putting on the game. It was very exciting to play something face to face after a whole year of lockdown. The SCW also features an exciting range of hats, and I found a neat skull and crossbones badge to adorn my Condor Legion/Falange de Choque beret.

Wonderful! Surely there must be room for John Cornford and his volunteer chums (in the Commune de Paris Battalion then?) in the University library, alternately firing their Lewis Gun (behind piled philosophy books, count as soft cover) and reciting poetry/Shakespeare...look forward to subsequent posts.

Looks great Tim- shame about the rain. Still you seem to have varnished in preperation for it.

Bob Cordery
It already looks better than it had any right to!

Trebian
Feel free to steal any or all of the scenario!

Vauban and Shandy
Given that we've spoken about it for a few years, it was good to get this game underway.

Brad DeSantis
I've been waiting ages for this too, so a spot of rain wasn't going to get in the way!

Archduke Piccolo
Nice to know you are already in a lather of anticipation!

Martin Rapier
A welcome return to form for the alfesco wargame. And your hat was splendid!

leadboy
International Brigade coming soon - I'm sure their memoirs won't be far behind.

Pete
Well it was a flat playing surface - and you know where the rain in Spain falls....