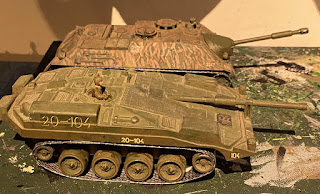 The reason I ended up with the battered Jagdpanzer Kanone which featured here recently was the model which accompanied it.  None other then that rarest of rarities a Tamiya 1/48 Strv-103 S-Tank.  I've been gently on the lookout for such things for some years now and while they often crop up on eBay they are often very expensive.
Regular sufferers of this blog will be aware I have something of a weakness for the S-Tank  - but after five Volvos and three Saabs that's hardly a surprise!  The Tamiya model was in decent shape - afflicted only by dust and a shortage of tracks.  The former I can live with - the latter was cured with more packing straps.
But the story doesn't end there.  Having secured one reasonably priced S-Tank you may imagine my delight when within a few days I found a second!  This time it was the Aurora kit - part built and seemingly in possession of all of it's parts.

This one even had tracks!  What luxury.  It was soon built and in the queue for painting. 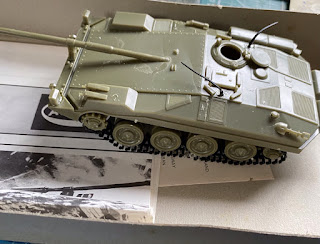 I need hardly add that if you have one of these kits gathering dust in your attic then either make your fortune on eBay or do the decent thing and send it to me!

That Aurora S-tank kit was one of the first models I ever built, nice find!

An iconic tank design if every there was one.