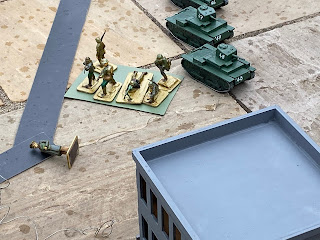 Having come under fire from several enemy units, the Lenin Division suffered greatly.  Among the casualties was Georges Kopp himself who finally bled out on the road. 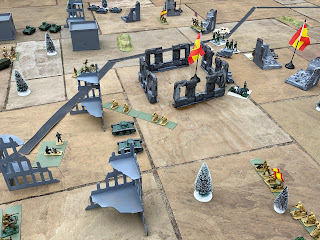 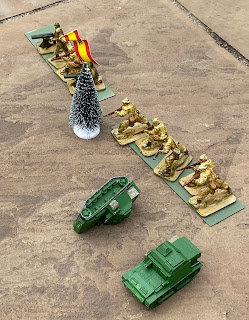 The Italian tankettes had come under fire from a pair of Russian tanks and one was soon ablaze (it was too windy for smoke markers!). 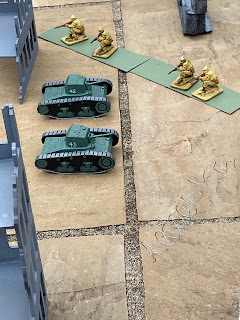 Enraged, a company of Moors set out to lob petrol bombs.  Seven figures set out - the other three learned the hard way that trying to light a Molotov Cocktail while running is jolly dangerous! 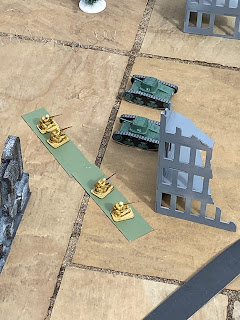 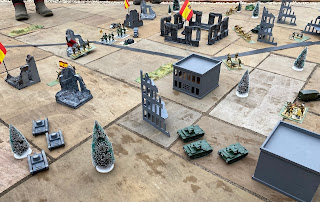 The Republican tanks on the left meanwhile had chased away the Panzers. 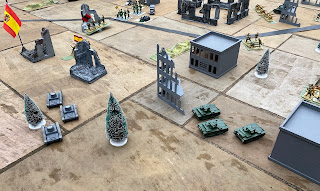 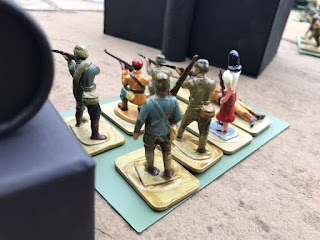 This rescued the Anarchists who had been the Panzers' main target.  Note the presence of the Miliciana in the rear rank.  She was referred to throughout the game as Sophia Loren....(photo by Russell) 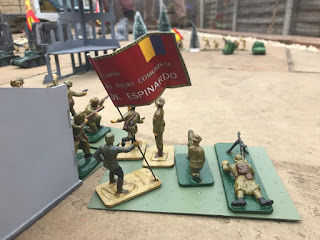 And what of the Internationals?  They remained far from the battle throughout.  Indeed, the sound of gunfire was drowned out be the clacking of typewriters as they all wrote their memoirs and novels. (photo by Russell)
By now both sides were pretty exhausted.  The Republicans still occupied most of the area so we agreed that the Nationalist assault had stalled.  But it had been close and the Nationalists' successes were clearly  - according to Colonel Orlov - due to treachery.  See the results of his even-handed investigation in the final part of this debacle!
Posted by Tim Gow at 22:13

Another wonderful chapter in the Battle of Madrid 1936! I especially like the Sophia Loren figure, she adds a great deal to the battle! Looking forward to the final installment is bittersweet, great to see one more chapter, but sad to see it end!

Brad DeSantis
Some figures always acquire a 'personality' which grows during the game.