As the battle drew to a close the Republicans could have been forgiven for being quite pleased to have saved Madrid.  You'd like to think this would have put everyone in good spirits.  Here is the scene at Gen. Gorev's HQ where smiles and handshakes are indeed happening:

But not everyone was joining in the festivities.  Having had another look at his personal victory conditions (see part 2 here) , NKVD Representative Orlov swooped on the Government meeting which was still in progress.  Here, ministers Miaja and Olivier had been joined by Durutti.  As the Anarchist Militia had been driven back and the POUM militias had also suffered greatly the explanation was - to Orlov at least - clearly treachery.  Thus it was that he and his NKVD comrades carried out a political education and realignment exercise.  Though it looked a lot like a firing squad to me. 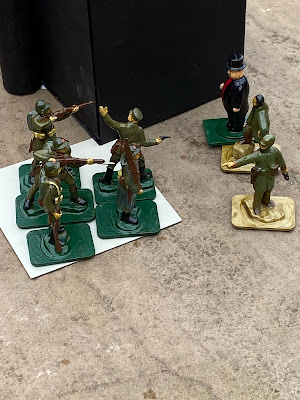 On the Republican side the most points were amassed by Jerry.  Mostly for for in-character role play but also for  having arrived by bus, while his comrades had each travelled in German-badged motor cars.  Very suspect....

Agreed by all the players to have been a great game, this exceeded my expectations and was an excellent start to what I hope will be a busy outdoor campaigning season.

A great game! Thank you for a week's worth of enjoyment and entertainment!
Very well done and appreciated!

That was really good fun Tim, and thank you for organising it. Hopefully the next one won't be quite as cold and damp, although it was very atmospheric.

Great gamme!
Thanks a lot.

The rain in Spain falls mainly on...

Looked great fun and good for the Republicans for beating back the filthy fascists :)

Martin Rapier
Hopefully next month it'll be a bit warmer. And at least as dry...

Syl
Thanks - glad you enjoyed it.

Red Cardinal
That's why I varnish the toys!

I have never commanded a firing squad, but would imagine that it would be safer to stand to the side of the firing line, not in front of it?

Chris Kemp
Maybe that's why you never got the job?