Or to be strictly accurate, Funny Little Wars and Silly Big Toys.

Bob Cordery recently drew to my attention the fact the 2013 is the centenary of the publication of H.G Wells' Little Wars.  For those of you unfamiliar (where have you been?) with LW, it involved HGW and his chums laying around his garden firing lead shot from toy cannons at his serried ranks of 54mm toy soldiers.

At around this time I came across the recent expansion of LW called Funny Little Wars.  For more info see the relevant website at http://www.thevirtualarmchairgeneral.com/079-rules.html#FLW 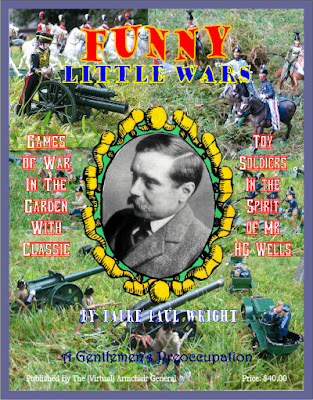 The author, who incidentally is the Chaplain to the Household Division of the British Army, describes the book as 'Edwardian syle war games in the garden for the better sort of chap.'  Clearly then, whether or not this appeals depends very much on one's self-image!

FLW takes Wells' original game and while maintaining it's spirit, adds in the elements which make it a viable game.  For example, in LW infantry existed only as artillery targets - now they can shoot back!  Fifteen suggested army lists are also included, but in keeping with the original, no real countries are mentioned by name.

Bob and I have both now begun the process of building armies - indeed I see from his most recent post at http://wargamingmiscellany.blogspot.com/2010/12/little-wars-first-step.html that we have both acquired old Crescent 18 pdr guns!  These devices fire matchsticks with tolerable accuracy but the 'holy grail' of LW and FLW must surely be the 4.7in Naval Gun produced by Wm Britains.  A visit to ebay is called for. 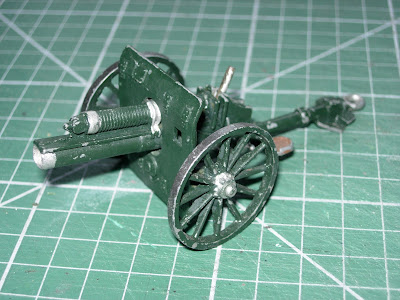 So far then, my 'army' (probably of an obscure Balkan-type state) consists of this gun and the two old 1/32 scale Napoleonic figures I have so far painted.  Well it's a start.
Posted by Tim Gow at 11:40

I've resisted the temptation on the outside garden gaming so far but I'm weakening, lol.

Don
I'm working on the assumption that most games will actually be indoors - especially at this time of year! Come on - you know you want to.
Tim

JK
Welcome! The cannon is a British 18 pounder by Crescent Toys. They are quite easy to find on eBay.