Forward to the past!

I have been tinkering on and off with some ideas for an 18th Century toy soldier game for some time.  Recently I decided that it was time to inflict the thing on other people.  Five players - John, Pete, Russell, Diego & Lloyd - assembled and I provided a couple of boxes of 54mm toys.  The 'rules' such as they are, borrow elements from both Funny Little Wars and Charles S Grant's The War Game.  Infantry and cavalry units are composed of 12 and 6 figures respectively.  For this test game the Earl's Army Red had 5 infantry, 1 cavalry and 1 gun.  The General's Army White had 6, 2 and 1. 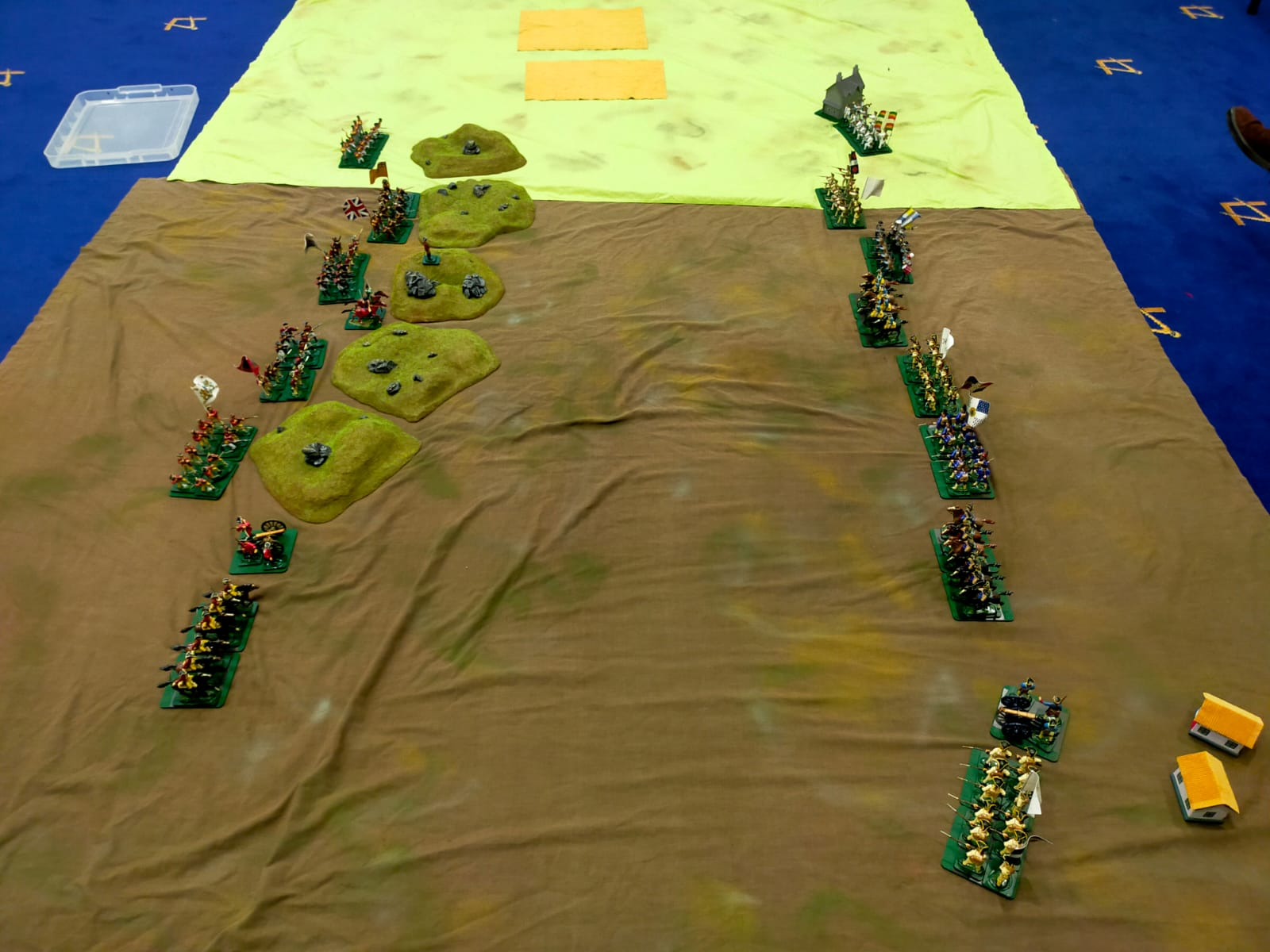 The toys are virtually all plastics, mostly BMC and A Call To Arms. 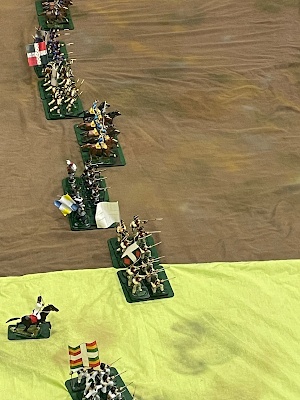 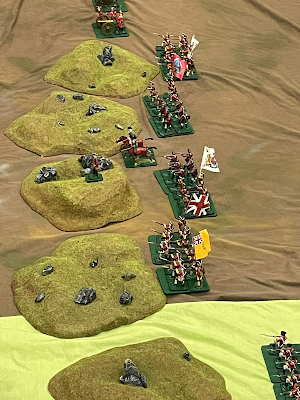 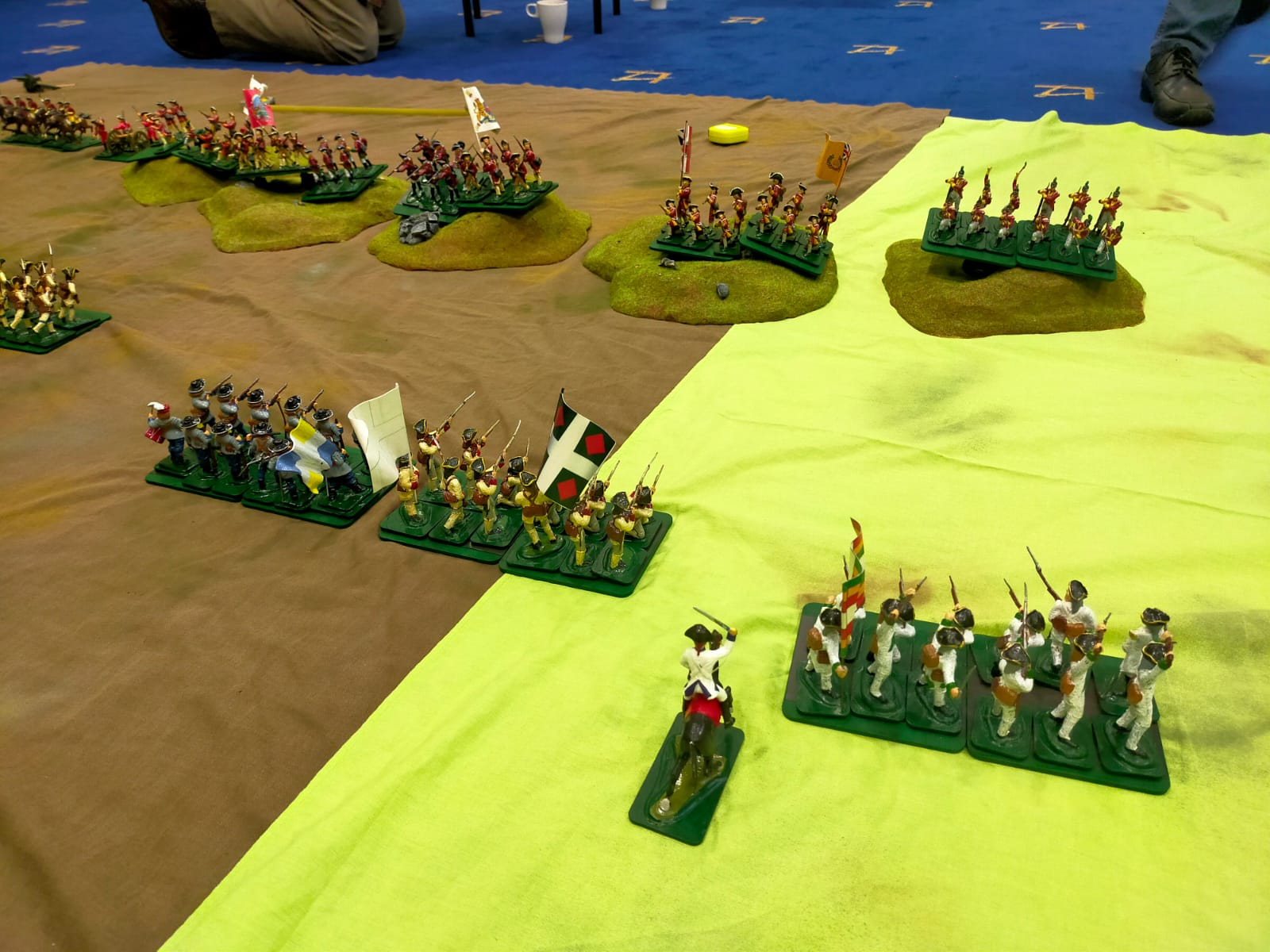 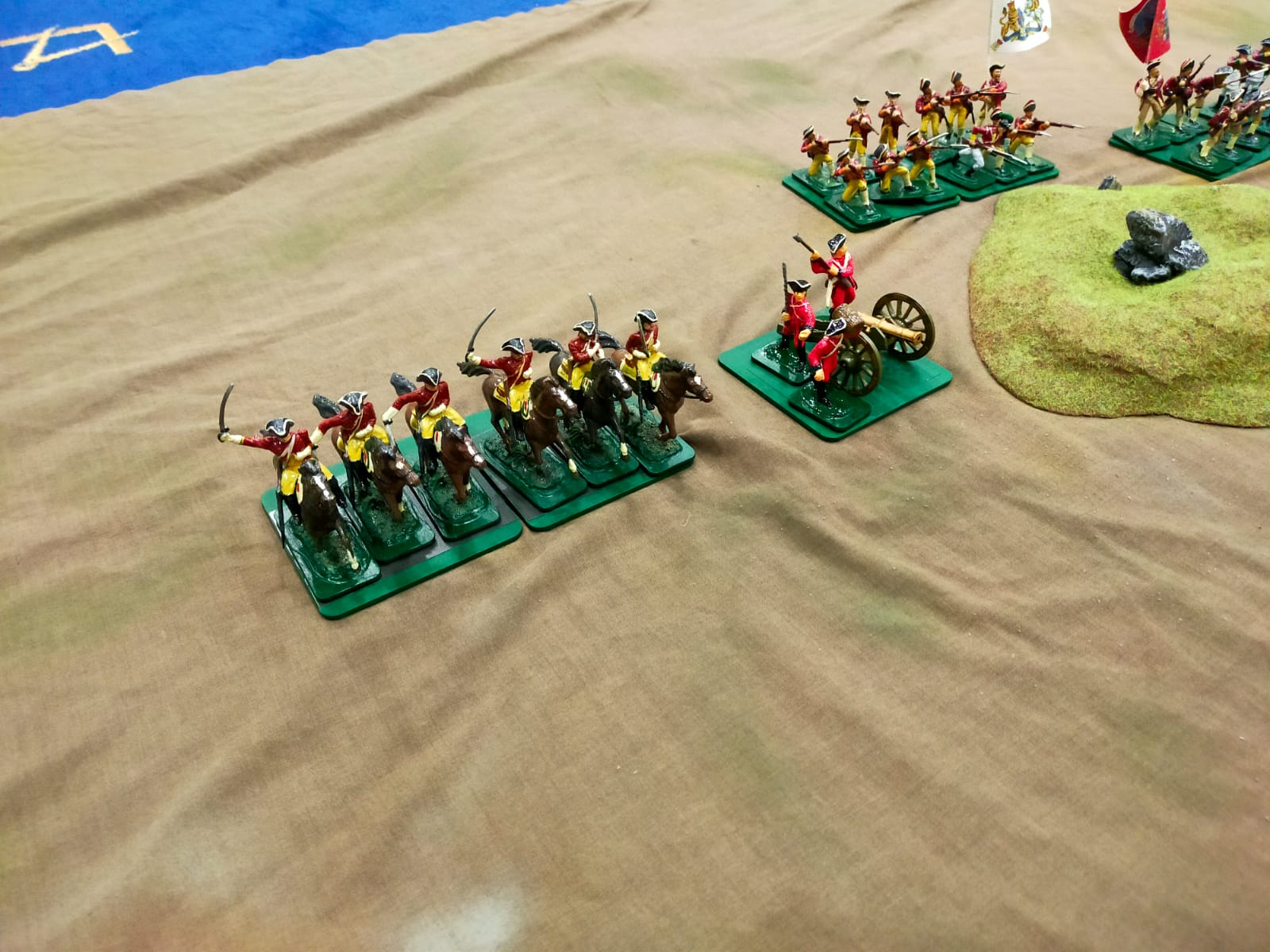 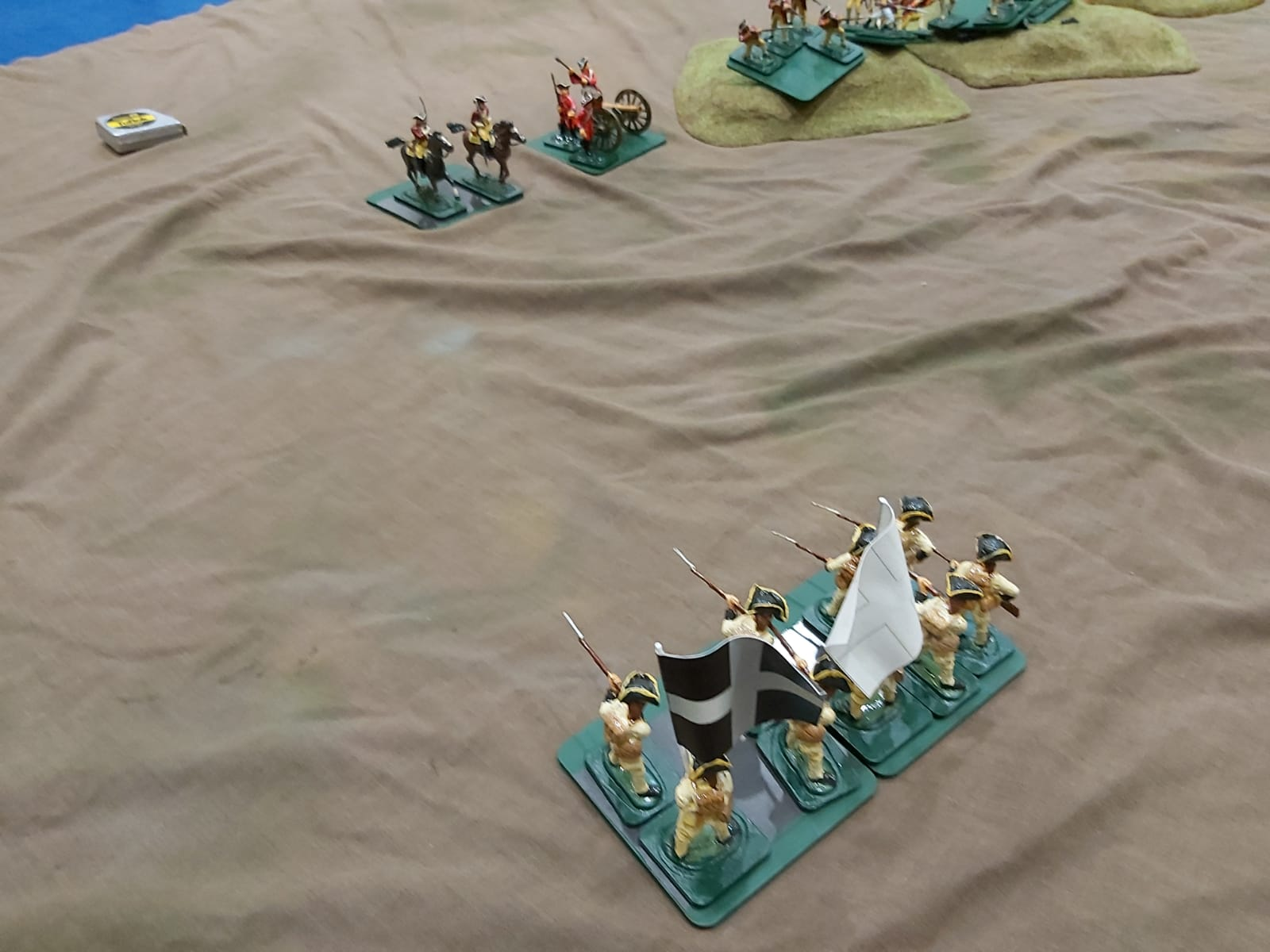 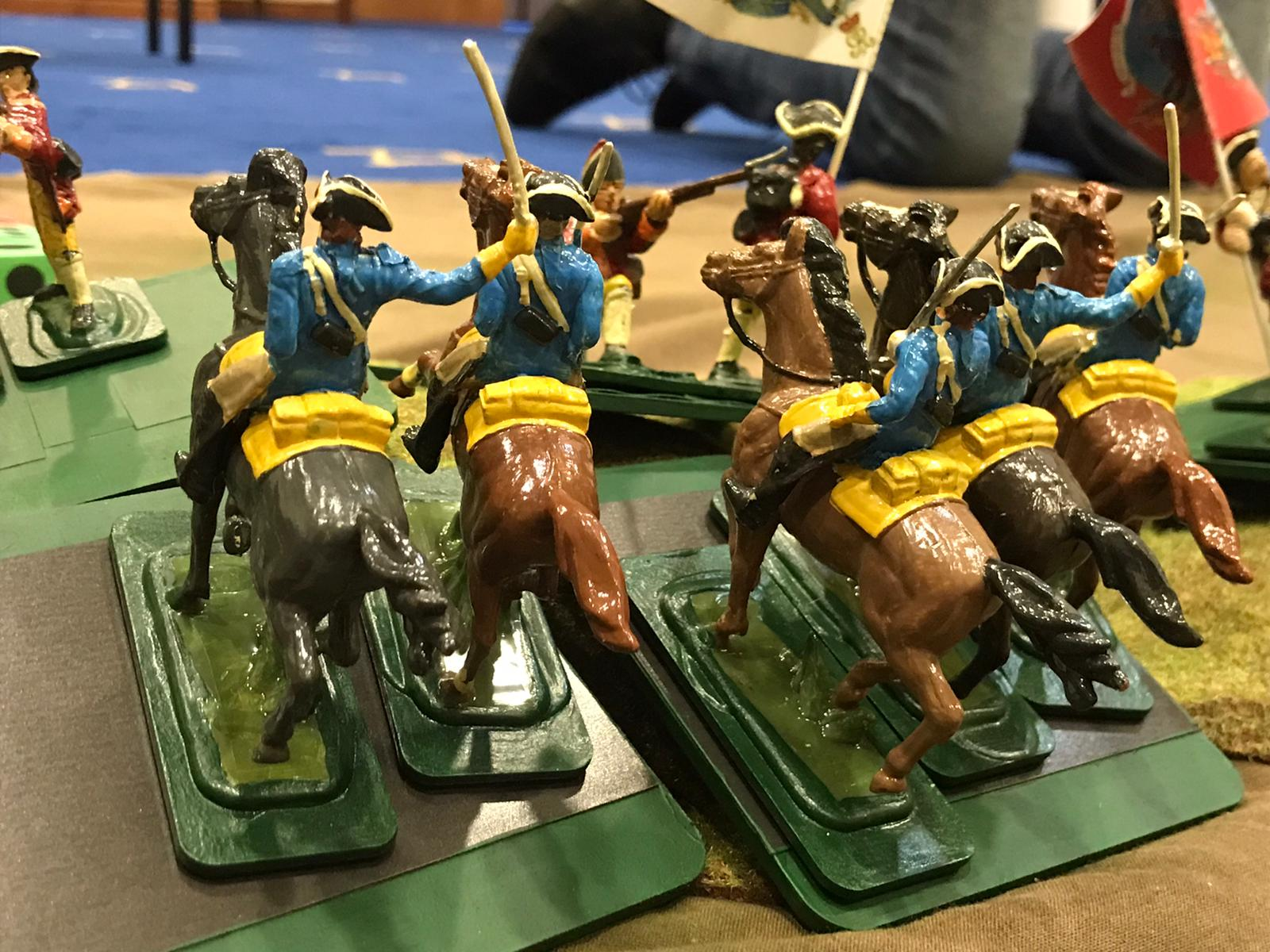 Eventually the Whites ran out of steam and shuffled off.  The game took 2 hours and kept all six of us us entertained.  And it looked pretty good.  More importantly, with a couple of tweaks the rules worked!  Expect more of this sort of thing.  Now, where did I put my tricorne hat?
My thanks to Russell, Pete and Diego for the use of their photos.

Mike
Quite so! My correction and your comment seem to have crossed in the ether!

More of this sort of thing, yes please!

This is a bit of a departure from your usual wargames … but very impressive, nonetheless.

It has the feel and look of a game played by Peter Young or Charles Grant .

Looks very good! I'd like to know more about the cavalry. I reckon my BMC 'Yorktowns' could use a small unit of cavalry...
Cheers,
Ion

That looks jolly good fun. Sorry I missed it.

tradgardmastare
I'll see what I can do!

Bob Cordery
Not that much of a change - still 54mm toys and matchstick firing guns! I certainly find my 12-figure regiments more manageable than those of the 50+ figures of the esteemed gentlemen you mention!

Funny Little Wars
It all seemed to work and the game is capable of being much larger and still flowing.

Archduke Piccolo
The cavalry were largely converted (not by me) from A Call To Arms Napoleonic figures. Armies In Plastic also do a set of AWI cavalry which paint up well.

Martin Rapier
I am confident there will be other opportunities for 3-cornered hat wearing!

Wonderful looking game! I have a bag or two of the AiP 18th C. figures that I keep meaning to get to. Too many ideas, too slow a painter!

John Y
Stock up on gloss varnish and get them painted!

Tim -
Thanks for the info. I'll be looking into it. 6 troopers the side should just about do it I reckon.
Cheers,
Ion

Spencer
I hoped you’d read this! The toys were much admired!