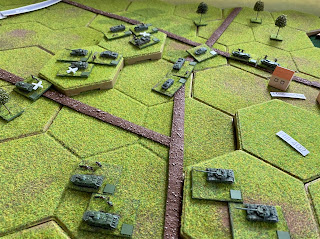 As we return to the action, with all of 1 Guards Tank Regiment present, 29 Guards Motor Rifle Regiment is sweeping round to the south. 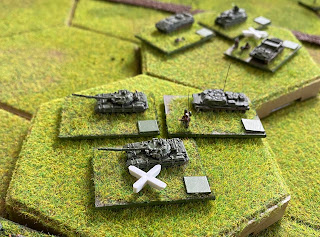 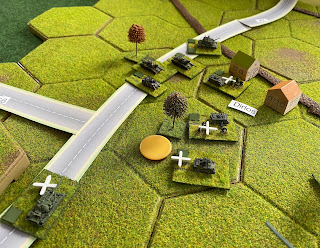 US forces gather around Dirlos and the autobahn junction... 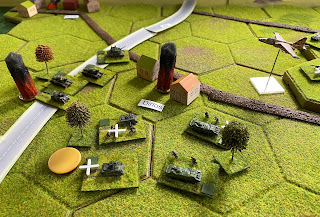 ...but the woods are increasingly infested with Sov infantry.  And here come more Frogfoots! 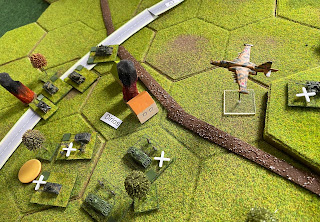 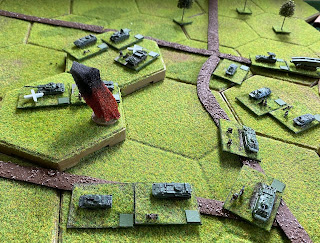 By now US artillery was falling on Hill 401 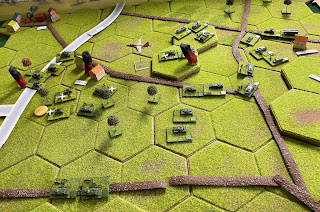 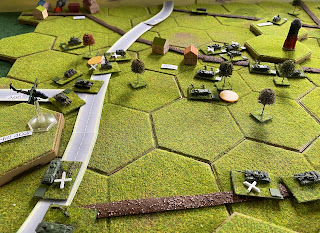 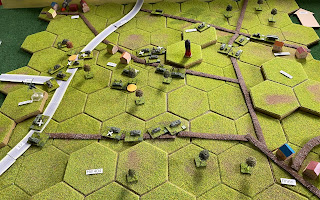 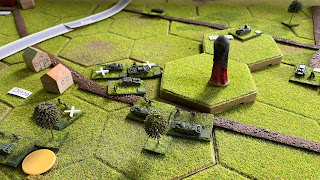 Meanwhile the MRB in the woods near Dirlos (bottom left) have decided that close assaulting Americans in woods is a bad idea. 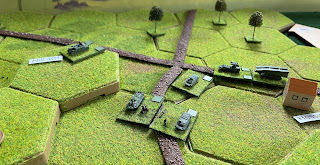 More of the MRR arriving. 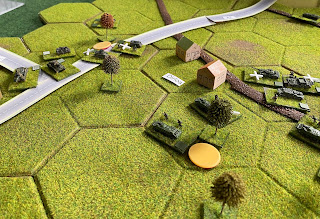 Some of the Americans near the autobahn junction have suffered a morale failure and on seeing which way the wind is blowing, the US commander decides that now is the time to withdraw.  At this point I received another air strike request from the Sovs (we used WhatsApp and text messaging for such things).  It read 'Autobahn junction tanks'. 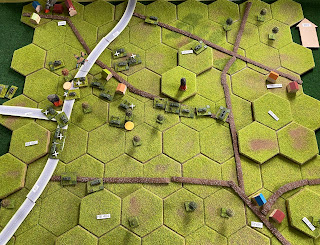 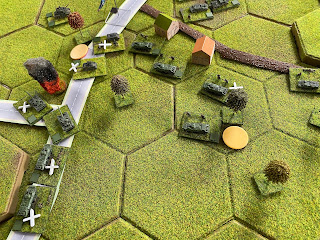 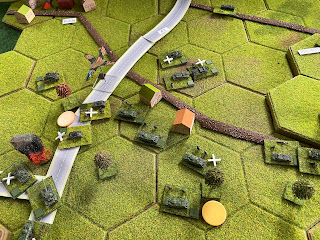 Endex.  We agreed that while the Sovs were struggling to find two intact tank or MR Btls to drive west, the Yanks hadn't quite eliminated a btl for every company they lost.  A narrow Soviet victory - Forward to the West, Comrades!
In all we played ten turns over two sessions totalling about two and a half hours.  As each turn represents 15 minutes we were able to play in real time.

In a post game email Betrand said - "A very enjoyable socially distanced game - always recommended on the wrong side of the Pennines - with a Soviet attack across the 'good going' of the Fulda Gap.  And a close call, made even closer by the dice rolling of the umpire.  Good to see the toys and a very handy system for an afternoons gaming.  Go West, young man!"

As mentioned at the start, I have now run the game again  - this time with six players.  My write-up of that version follows soon.
Posted by Tim Gow at 11:24

Hurrah! Now only four days to the Rhine!

Hi Tim- Thanks for Part 2. Interesting if there is another battle will the US Force be victorious? Do like this Cold War in 6mm - very compact battlefield. Cheers. KEV.

Excellent. Love the scope and scale here. Look forward to the pdf or rules issue.

Duc de Gobin
Thanks. The compact size of the game has the added benefit that it’s easy enough to run over Skype.

Geordie
Thanks. I’ve long believed that a good game should produce a narrative.