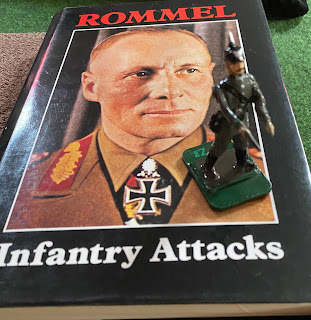 Picking up a few more 1914 French recently prompted me to revisit this Skirmish Campaigns book.  Thus it was that a couple of weeks ago I set up the first scenario and five players joined me on Zoom as we ran through it using A Fistful Of Lead.  Above - Young Lt. Rommel poses with a later literary effort. 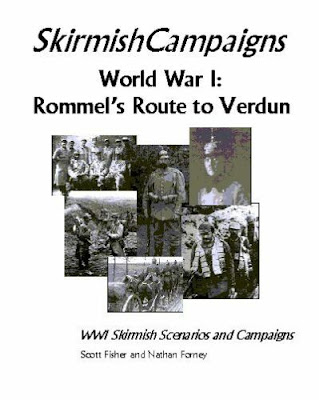 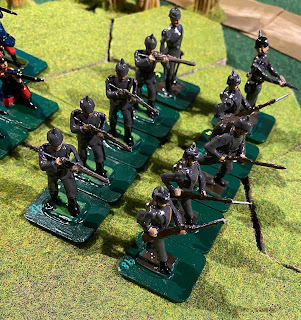 The Germans were played by Russell and Pete - the latter as Rommel himself. 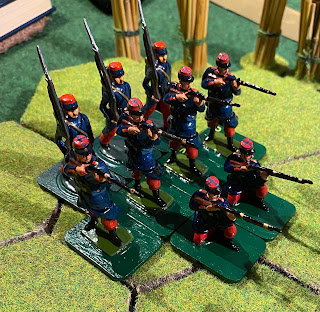 The French were commanded by John, Simon and Diego.
If you've been counting, you'll have established that the six of us were entertained for two evenings by a game with only 19 toy soldiers!  All are 54mm metal from my own collection.  I can't take credit for any of the original paintwork.
I'll reveal the action over a further two posts.
Posted by Tim Gow at 14:47

Really wenjoyed this one- I'd been itching to play that scenario for a while.

Don't tell my wife that you were all entertained for two evenings with only 19 soldiers! She'll wonder why I need so many more than that! Mum's the word!

Pete
You did a convincing job as young Rommel.

Brad DeSantis
It makes sense to have some spare figures. A few thousand or so….

Tim -
If there is one regret of omission that I have, it is this. A copy of Rommel's book sat on a shelf in a Wellington bookshop for weeks whilst I paid my regular visit to see what goodies might be found. Weeks. Every time I'd think about it, and ... nah. I never did buy it. Eventually, it vanished. I didn't regret it at once, but after a while...

Whenever I think about it now, I think to myself 'Mug, mug, mug, mug...'
Cheers,
Ion

I enjoyed Rommel's book (admittedly purchased for the Italy section) enough that I got rid of the paperback copy I had and bought an older hardcover edition.

I'm quite curious about if/how your adapting the scenarios. The Skirmish Campaigns books I have had usually called for at least twice that many figures.

Archduke Piccolo
It’s a great read and still quite easy to come by.

John Y
The numbers of figures initially deterred me, but in the end I reduce the numbers by about a quarter. It seemed to work.