Today, for the first time in two and a half years, I attended a wargames show!  Partizan, these days at the Newark Showground, is effectively my ‘local’ show being only a 40 or so minute drive away. It was good to meet up with friends, notably (and apologies if I’ve missed you): John, Tim, Russell, Diego, Simon, Tom, Graham, Phil, Chris K, Chris A, Mick, Mark, Kayte, Terry and Bob.  And of course this was the first Partizan since the sad death of Duncan Macfarlane.  He was much in my thoughts.

As always I was part of a team presenting a participation game. This year we had Tim C’s ‘1812’, which allowed a solo player to take the part of Napoleon and fight his Russian campaign in only ten minutes!  The game was set on a lovely map and used some of Tim’s beautiful 1/300 H&R figures. 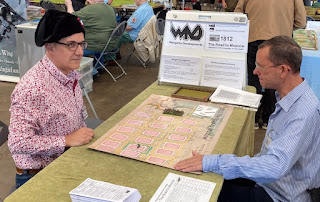 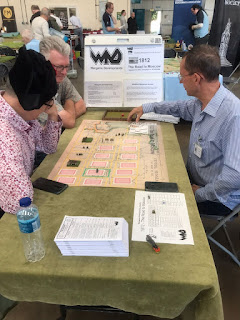 The same game, with me seated to Diego’s left. Photo by Russell. 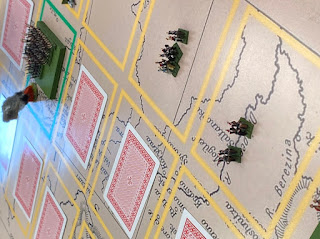 Part of the map. 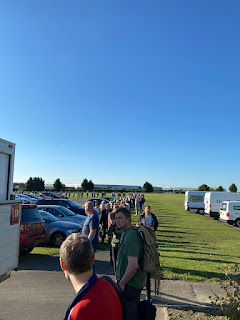 The show seemed to be well attended. I gather that by 1200, a healthy 700 people had been admitted. Well done to the organisers!  The nice weather made queueing no hardship. Both of these photos by Russell. 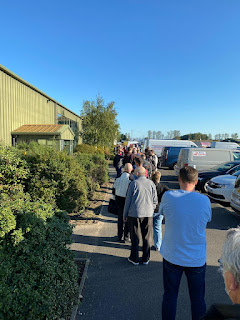 There were plenty of participation and display games. Here are just a couple. 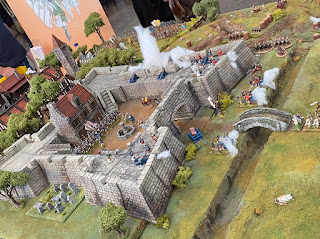 I was pleased to see this Little Wars game with ‘proper’ old 54mm toys! 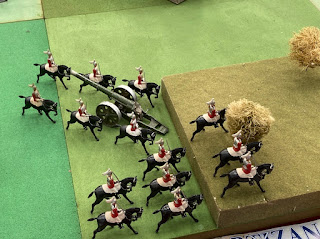 While there was a fair retail frenzy going on my own purchases were few. This assortment of paintbrushes cost a very reasonable £16. 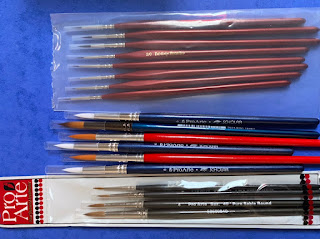 Didn't see much mask wearing. That would have kept me away if I was close enough to attend.

I was at Carronade in Falkirk a couple of weekends ago. Everyone wore masks.

Jim Duncan
Mask wearers were definitely in the minority at Partizan. Different rules in Scotland though.

Very unwise no matter the rules.

Cool stuff and well done for putting the game on

I got along in the afternoon (sorry to have missed you Tim). Yes, it was lovely to go to an actual Wargames show. I'll write it up in due course.

The WD game looked superb and was fun to play. I roasted in a burning Moscow and then froze in the Russian winter. The highlight for me (apart from the WD game of course!) was the To the Strongest game of Gaugamela using 60mm (yes 6cm!) miniatures. There were also a couple of very attractive early 19th century British in India games. On the retail side, I got a few more Hexon terrain pieces so I now have a 12x8 table and some mdf playing card tokens from Warbases.

Color me intrigued by The Road to Moscow! Although that Little Wars game is just about everything I could want in a setup.

Rather impressed you only came away with brushes. I find the few times I've attended wargames shows, money flies out of my pocket for all sorts of things I had no idea I needed.

Geordie
All credit to Tim C for design and execution.

Pete
It's the only Wargames show I've been to in years!

Martin Rapier
I'd forgotten how noisy these things are! I was flagging a bit so left earlier than I'd intended.

Simon
Some good shopping there - I take it that's 12x8 hexes, not feet!

John Y
We (Wargame Developments) have something of a reputation for short solo games. It gets a good throughput of players. We've already done Op Barbarossa in 10 minutes, so I guess 1812 was only a matter of time! I find that there's little I want to buy at Wargames shows these days - but remember to offset my apparent frugality against the retail excess of the toy soldier show a couple of weeks ago!