A couple of recent games have revealed the need for more Nationalist troops.  I had already bodged a couple of companies of Moroccans (see this post from far-off 2019) and thus it was off to the unpainted plastic mines to see what could be adapted.  The ever-useful HAT ACW Zouaves sets looked a promising starting point for more Regulares, so a little bodging and painting later, here is the next batch. 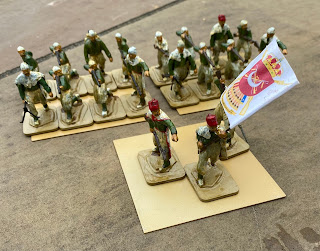 I crowded them on to some bases for a quick photo session between rain showers.  There are a few head swaps in there and the standard bearer is my usual adaptation (carve away musket, replace with brass rod flagpole, add paper flag, varnish).  Some of the chaps have cloaks made from kitchen tissue soaked in PVA. 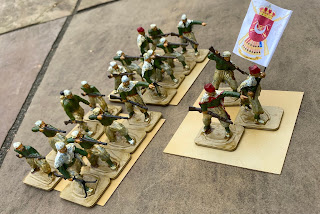 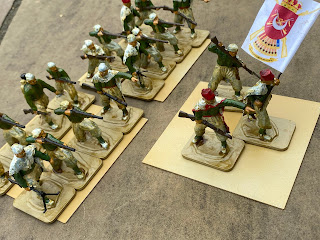 On the weapons front, mostly I cut down the original muskets.  The figures with 'ring hands' intended to carry musket at the trail were crying out to be re-armed.  Some have Airfix Lee-Enfield rifles, others LMGs from various kits. 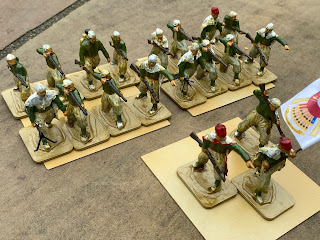 They look quite a mean bunch. I have a further batch converted and undercoated. 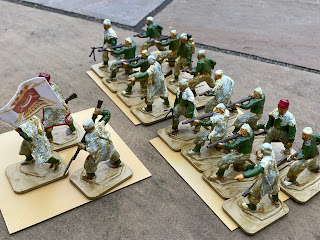 Might I suggest that a unit of Tiradores de Ifni (https://en.wikipedia.org/wiki/Tiradores_de_Ifni) might made a nice additional force to addd to your Regulares. The wore similar uniforms, but sometimes wore a more Arabic-looking uniform.

Bob Cordery
I have some Carlist militia on the table next!

A mean batch indeed Tim! This unit will definitely strike fear into any opposing force that dares to stand in its way! Well done!

Perhaps I have this question because I come from the land of petulant tea drinkers, but is kitchen tissue the same as what is called "paper towels" in the States or it something else entirely?

Brad DeSantis
Agreed. Unless the enemy notice that most of these chaps are toting 1860s muskets, in which case they’re in trouble.

John Y
Probably. I will ask my daughter in law (she’s from Washington State) to confirm. Separated by a common language indeed!