It occurred to me that some readers from foreign parts may have missed the 'joke' about L.A.D.A. in my recent President Fred posts.
LADA was the name under which cars built by AutoVaz were sold in the UK and some other countries. Sold as the Zhiguli in the Soviet Bloc, most Lada cars were based on old Fiat designs but with rather thicker panels and beefed-up suspension. 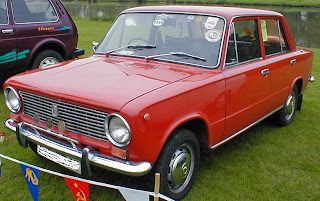 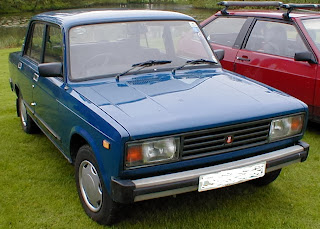 I needed a faction equipped with Russian kit and so LADA seemed like a good idea.  Thus was born the Leftist Army of Darkest Africa.
Generally viewed with disdain in the UK, many survivors were re-exported to Russia after the end of the Cold War.
A friend has reported being driven though Siberia in a Lada in temperatures of minus 35C!

Email ThisBlogThis!Share to TwitterShare to FacebookShare to Pinterest
Labels: Cars

I have fond memories of the morally upright LADA, a vehicle so well planned out that it came with a crank. My uncle owned one (and possibly two) as did my now inlays when I was dating my wife (back in the days BC - before children).

My cousin went through a strange spell of buying Soviet-bloc cars - at various times he had a Polski-Fiat, a couple of Zastavas and what was a slightly upmarket Lada. I think that once you went down this road(?) the only dealers who would offer a trade-in were dealers of other Eastern brands, so he was kind of stuck until he borrowed enough to buy an actual (Italian) Fiat, and things improved thereafter.

I remember the Lada - it weighted a ton and a half, which was understandable when you saw the hand-welding in the boot and so on. I drove it once on the Wirral motorway, and it wouldn't go in a straight line. It terrified the life out of me - the springing was very squishy, it weaved about and you had to work all the time to keep it pointing between the white lines. It was comfortable enough if you weren't driving, and if you didn't realise how marginal the control arrangements were.

Peter Douglas
How you must have lived! I remember neighbours buying one in the '70s - it was startlingly cheap. And startlingly orange....

MSFoy
I gather that if serviced properly and driven mercilessly they actually lasted quite well. The Lada may have been the best of your cousin's cars,

The LADA Niva was surprisingly popular in a lot of places, including S.Africa, where I grew up. It still has a cult following around the world. I remember in the early 1990s that Russian Antarctic Sailors bought up a lot of spares when they were docked in Cape Town, as they could not get spares back in Russia! I notice that the Niva has been release in the UK again: http://www.autocar.co.uk/car-review/lada/niva/first-drives/lada-niva

Would love one of those Nivas- though I would be making a fashion of being unfashionable....

Here in darkest Africa the Lada doesn't really feature. The decadent West type Toyotas are preferred. Had there been a Lada technical in the product line-up things would undoubtedly be different. But I do recall the highways, and byways, of Western Germany being littered with Trabants at one stage, all piled beyond the rafters with personal and household effects. From personal observation they were also equipped to lay a smokescreen.

My favourite Lada Joke wasn't in the top 10 :O(

"How do you double the price of a Lada?"

Orange you say…let's just say the pet name for my in laws Lada was Garfield.

I do recall a BBC radio report about a Brit who collected Trabants. He took the ferry to Germany as a walk on and drove back off, with the cost of his new wheels falling under his duty free limits.

From the watchtower of the gulag I can spy two Lada's decaying back to nature along with a Fiat 125.

One of them is a Kermit the frog green and it blends in nicely with the grass up to the windscreen.

I can remember back in the 90's the Company Commander down here brought one and was immediately placed under suspicion since it was also Soviet red and he had a nice Stalin 'tash.

Herman Van Kredenburg
The buying up of spare in the UK soon turned to the export of complete cars! I hadn't realised that the Lada infested South Africa too!

Pete
Unfashionable? You? I'm saying nothing....

Arthur
The Trabbie was never oficially imported to the UK, but quite a number found their way here after the wall came down. A few years ago a bloke in Derbyshire was prosecuted by the local council for having a couple of dozen in his garden.

Chris Kemp
And that was when fuel was a lot cheaper!