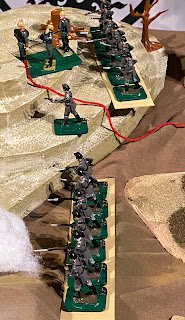 The German Jager battalion in reserve.  Note the telephone lines made from red wool. 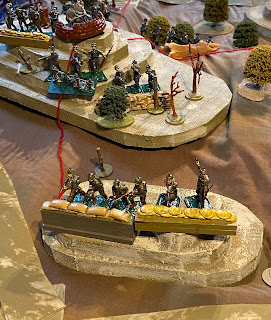 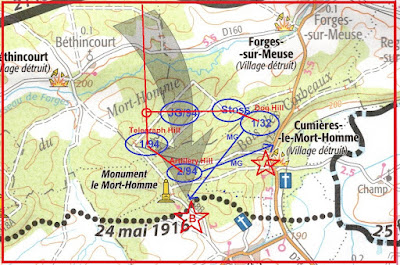 The Jagers and Stormtroops will move to reserve positions as marked - essentially on the reverse slope and offset to the left and right respectively. If they have time, dig in as much as possible.

Own positions are also pre registered in the event of a counterattack - Dog, Artillery, Telegraph.

Fire called by telephone ideally, or if needed by flare.

If the guns need to be on table, just back in the valley somewhere one gun behind each regiment, ideally where they can see the ridgeline if direct fire is required.

The Telephone team will establish an exchange (red circle on map) behind Telegraph Hill and run a wire forward via Telegraph Hill to Artillery Hill. A second wire will run via JG/94, Stosstrupp and then to Dog Hill.  If there is time, run a third wire to any on table artillery positions but I doubt there will be.

The Field Hospital can keep up the good work! 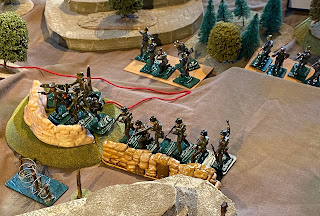 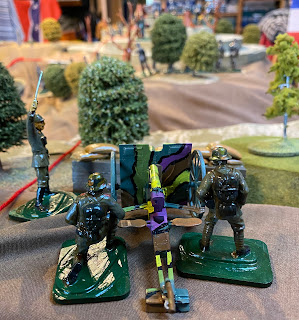 Clear I/211 (Artillery Hill) position first, using all artillery, then take on I/215 (Dog Hill)

Turn 5 – infantry advance on their objective. Artillery continues to fire.

Turn 8 and 9 – leaving one company to garrison the I/211 position, the rest of the infantry move to I/215’s position. Artillery keep firing

Next time we'll see what happened when the plans were executed.

The best laid plans of mice and men....

I do like the look of the game Tim.

Nice clear objectives Tim, but in the heat of battle we'll see how it turns out! I like the idea of the telephone lines, it adds a new dimension to the game! The camo on that cannon is awesome, nice job!

Love the telephone lines! I just watched Lost Battalion the other day and the integrity of the lines plays a role. Hadn't really thought about how to achieve that in war game - I might have to "borrow" this idea!

The camouflage on that gun is eye watering, Tim. I love it!

Martin Rapier
It was very entertaining to compare opposing plans!

Tradgardmastare
Thanks - an excuse to roll out all sorts of unlikely stuff!

Brad DeSantis
You know what they say about plans and the enemy!

Chris Kemp
Like a lot of my camo painting, it looks far better than it has any right to!