Meanwhile back on the left bank of the Meuse..... 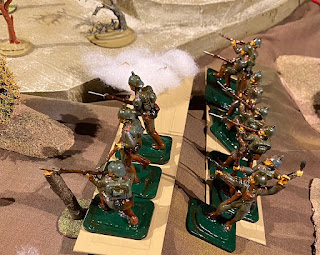 German infantry surges forward  - less through a storm of steel than a desultory hail of matchsticks. This is one of two battalions closing in on.... 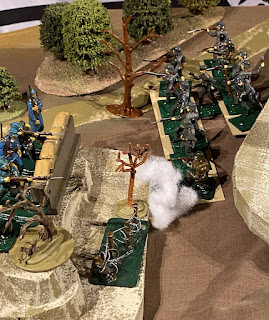 ....Artillery Hill, where gunfire has at least removed some of the French wire. 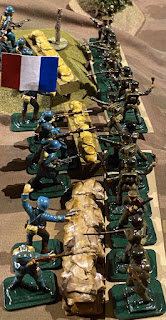 Meanwhile at Dog Hill the assault goes in.... 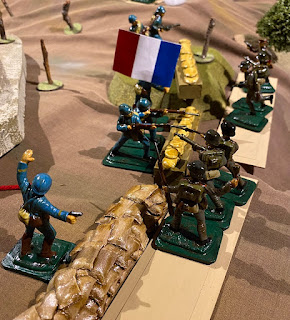 ...and soon the ranks are thinned on both sides! 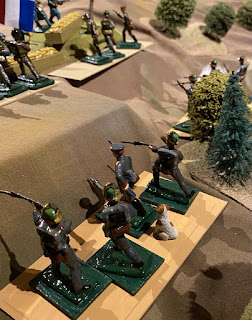 But the wily Boche have Stosstruppe Von Gow in reserve. 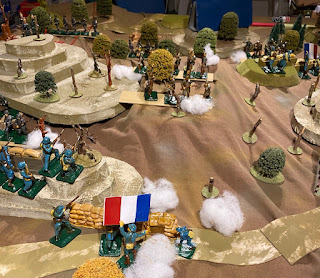 Artillery Hill (left) with Telegraph Hill in the background.  The slightly tatty German battalions prepare to hurl themselves against the French defences. 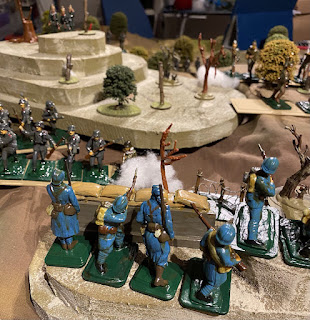 In the bloody melee which ensued, the Germans prevailed - but only just! 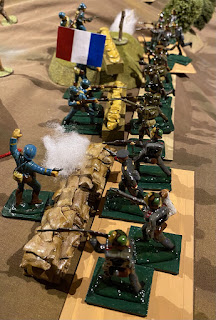 Back at Dog Hill, the stormtroopers have joined the fight and it's all too much for the weakened defence. 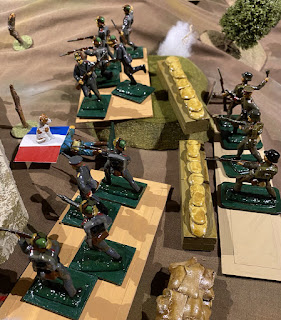 The dog captured the French flag - giving the hill it's name.
At this point I told the French that one of their Colonels was to be court-martialled for losing the position, but he got away with it by virtue of being dead. (this actually happened)
A fresh regiment was rushed to the front from a rather better division and the French players were asked to plan an immediate counterattack.  (this too actually happened)
The Germans were asked to prepare a defensive plan.
Next time I will share with you the plans
Posted by Tim Gow at 15:16

Excellent battle and photos Tim! Stosstruppe Von Gow and the dog seemed to turn the tide and sealed the victory! I look forward to your next report!

It was all very heroic, although the fighting aro nd Dog Hill did get a bit sticky!

MGB
It does look pretty good!

Martin Rapier
I did wonder if Dog was a’ hill too far’.