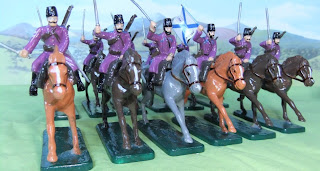 Recently emerged from the trackless Tratvian steppe is this Cossack Regiment. These are 54mm Armies in Plastic figures painted in my usual 'toy soldier' style and topped off with two coats of floor varnish. As the Tratvian Army will eventually include three such units, I was able to mix and match from several sets in order to have matching poses (of troopers and horses). This is the 2nd Regt, the 1st can be seen here: http://megablitzandmore.blogspot.co.uk/2012/09/tratvian-cossacks.html
The only light conversion work concerned the standard bearer whose sabre was replaced with a florist wire flag pole. 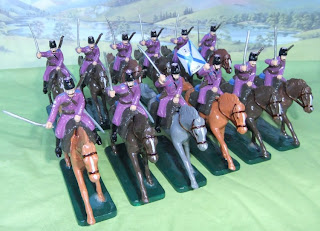 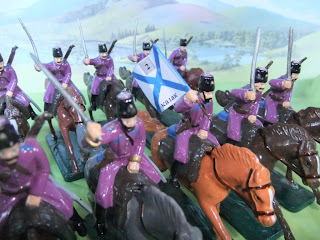 Does the floor varnish prevent paint cracking? I have been using gloss and matt spray and sometimes my plastics paint crack at the weapons or a figure spot touching another figure lifts off.

I love this retro 'toy soldier' style of painting - takes me way back to when I had Britains toy soldiers when I was a kid. Terrific.

Scott B Lesch
I started painting my Funny Little Wars armies a little over two years ago - no 'cracking' issues as yet.

Stephen Beat
There are loads of pretty cheap plastic figures available now. You know you want to...

Thank you Tim, I'll try it.