Following the Anson's landslide victory in my poll* I have now begun work on restoring it for possible game use. 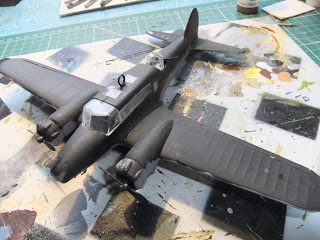 The thing had been roughly daubed in matt black.  Happily the windows are in halfway reasonable shape.  Not really clear from the first photo is the rather impressive layer of dust.  Repair work included refitting the elevators and turret gun.  The undercarriage was a bit wobbly so I used a lot of glue... 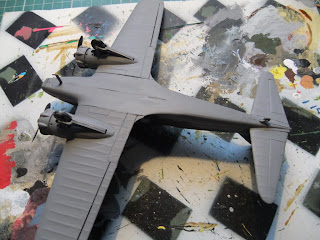 A coat of pale grey was applied underneath... 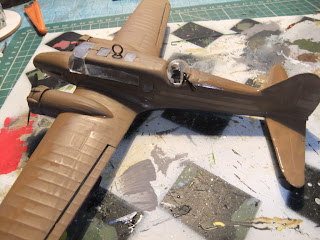 *The full results are as follows:
In forth place with 4 votes -  Hurricane IID
In third place with 5 votes - Bf-109G
In second place with 6 votes -the mighty Lancaster
But this week's clear winner with a massive 22 votes is the Avro Anson!
A total of 37 votes were cast - representing 24.6% of the blog's followers.  This contrasts rather well with the 15.5% turnout for the recent South Yorkshire Police Commissioner election.  Is this at all worrying?

LMAO! Democracy at work. I have to admit I voted for the Hurricane, but then immediately regretted my choice...So it's perhaps as well I didn't turn out for the police commissionaire election!

Looking forward to the Anson. What are you going to do with the dust?! ;)

Dog wanted Lancaster, I wanted Anson - dog won by quite a few hair breadths over 100m dash... jumped the gun, actually, and should have shot him but only had blanks. Better prepared next time :-)

I remember an Anson in Port Elizabeth, South Africa but with a biplane configuration? is this possible, or was it caused by beer?

Don't blame the South Yorkshire voters for their low turnout. That is a clear voter statement upon the uninspiring quality of the candidates.

That is entirely different from the turnout in a poll such as was conducted here. For some of us the suspense of discovering which would come next might well have a disincentive to taking a decision at the ballot.

What game do you intend using the Anson for?

Looking good so far. Your Anson is probably in better shape, figuratively, than were most Ansons after being roughly handled by sprogs. I talked to an old gent who learned to fly on an Anson as part of the Commonwealth Air Training Program during WW2, and he had good things to say about them, in part because they were so rugged.

Stephen Beat
Never mind - maybe the Hurri will be in the next poll.
Thanks for asking about the dust. I have carefully collected it and will replace it on the completed model...

Arthur
The Lancaster is something of a dog so that makes (some) sense. I shall ask for my dog's opinion too.
A biplane Anson? Are you sure it was only beer? A DH Rapide looks a bit similar. If you're drunk.

Archduke Piccolo
There was a story that someone had entered a shop dummy as a candidate in a local election, so I suppose an Airfix Police Commissioner is the logical next step!

Conrad Kinch
I'm a bit baffled by your question. Did you think there was some sort of plan?

Michael Peterson
The Airfix version seems to be a tough old bird too. Art imitating life?

Good refurbing so far Tim. Could be a handy if somewhat ripe target for early war games...Did the Greeks use them in 40/41?

Paul
I'm not aware of the Greeks having any. It'll probably be good old Coastal Command for this one.

West1871
Are you implying a certain cheapness on my part sir? If so, you're dead right!