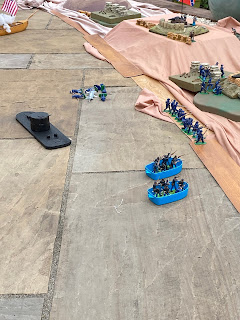 The US infantry storm ashore under the dubious cover of the monitor's guns... 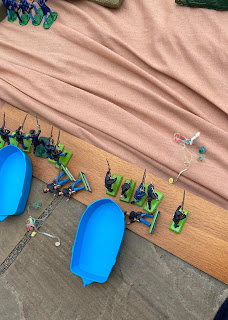 ...but the grapeshot kept on coming.  Luckily it was mostly inaccurate. 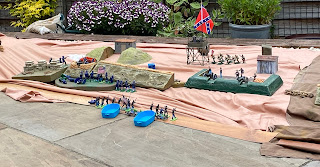 In the distance some Reb infantry have at least appeared.  Too late to save the day? 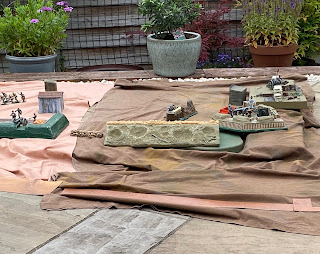 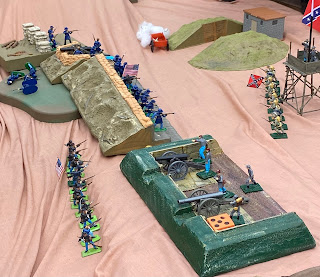 Having captured a couple of batteries a US regiment stormed across the ramparts  - both side's infantry squared up. 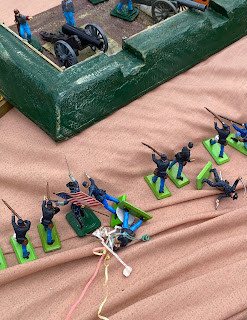 The double battery continued to spew forth party popper grapeshot. 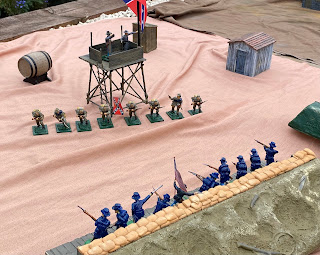 Egged on by Colonel Lamb - perched atop the lookout tower - the CS infantry exchanged a withering hail of musketry with their opposite numbers. 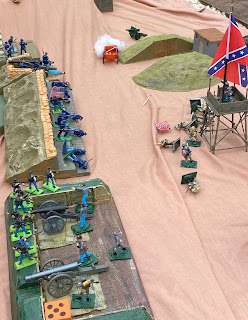 Endgame.  As the double battery was about to fall and Reb infantry were being listed as 'out of stock' we drew a veil over proceedings.  We agreed that the Yanks still had enough strength to overcome the few remaining defenders but that without a fleet they were vulnerable to any CS counterattack - should such an event be forthcoming.
So the fort has fallen but at the cost of the US fleet.  It's not looking good for Adm. Porter!
As always, the game was made a success by the efforts of the players - thanks chaps!
Posted by Tim Gow at 18:39

A great game Tim- thanks for putting it on. One of my favourite of the year.

What?! You're going to leave the matter in strategic limbo!? Actually, if what happened here was the measure of the Union's actual success in December 1864, chances are that it would have been enough. With Colonel Lamb beseeching theatre commander Bragg for reinforcements - or any kind of aid - and Bragg disdaining to offer any such thing, the Yankees might well have had time to gather another blockading fleet.

I recall a story, possibly apocryphal, about Braxton Bragg. Seems he was something of a contrarian: he'd argue with anybody. In his younger days he was a company commander at some fort in Florida. He also did a stint in command of the commissary stores.

On one occasion, as company commander he requested some extra supplies for his unit. Don't recall what - might have been replacements for worn uniforms, might have been requisition forms. The following all took place in usual form, by correspondence.

As company commander, Bragg insisted upon the request being fulfilled, outlining his arguments point by point.

At this stage, the fort's Commandant stepped in, and told Bragg to sort the matter out at once.

"You have argued and disputed with every other officer in this establishment,' raged the Commandant. 'Now you're arguing with yourself!'

As I say, possibly apocryphal, but apparently that was what he was like.

That was a great game, thanks Tim. You did really well arranging the weather as well!

Another great report Tim! It's never good to lose your fleet, but at least they won the battle? That's war my boy!

Pete
I’m delighted that you were able to attend!

Archduke Piccolo
Fun it was. Unlike the original! And Bragg seems to have been the sort of guy to lower morale by his very presence.

Martin Rapier
The weather was all part of my cunning plan. Although we should really have played the game in December….

Brad DeSantis
Thanks - it was an entertaining day.

What a magnificent game and series of posts. A fabulous example of the 'wargame in the garden'. My congratulations.
Regards, James

Chris Kemp
A cheery way of bringing carnage to the 54mm world!

James Fisher
That’s damn kind of you to say so sir! And congratulations for having such a fine fort named after you…