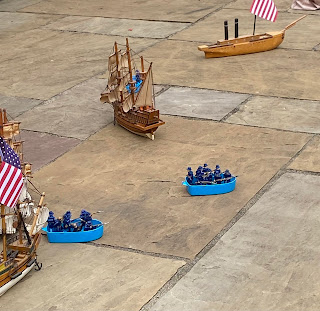 As we return to the action US troops have been lowered into little boats for the hazardous landing part of the operation. 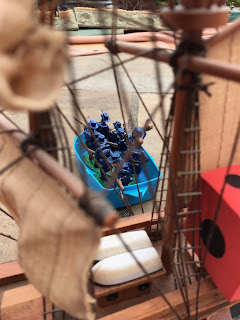 Best photo of the day (by Russell).  The brave lads set out in their boat. 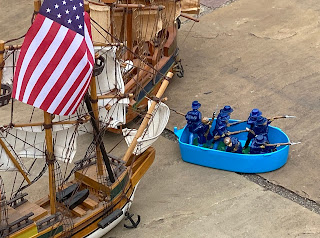 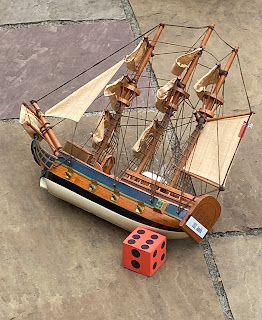 As it turned out, this was quite a good time to leave the fleet as a ship soon foundered. 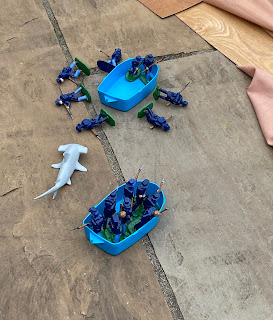 Mind you, it wasn't all plain sailing (sorry!) in the assault boats.  One took a direct hit from a Reb gun and Sharkie was soon on the scene! 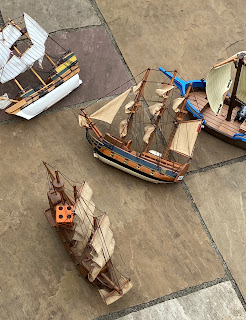 By now the fleet was a shambles, with two ships sunk, a third full of holes and of course only one out of three ironclads still in action. 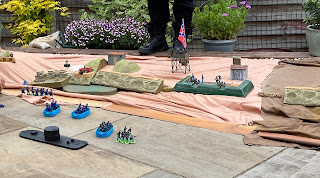 Under the guns of the last (and cheapest!) monitor the Yanks storm ashore... 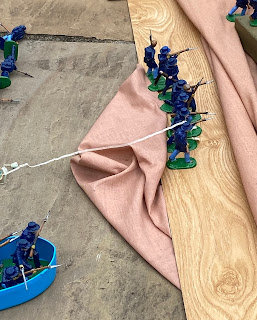 ...to be met by a hail of party-popper grapeshot! 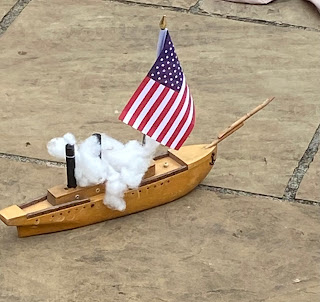 Meanwhile, Cdr Rhind, having been sent back to the Portland by an irate Adm Porter has succeeded in detonating the charges.  At this point we all obligingly shouted "bang!"
So, there are troops ashore but an increasingly well-fed shark.  Stay tuned for the thrilling next (and final) episode!
Posted by Tim Gow at 17:40

Great action Tim, very exciting! Will Sharkie reach his fill at some point? Looking forward to the finale!

This ain't looking good for the Yankees... This is starting to look like the December 1864 attack; not that of January 1865. Are we to infer that Major-General Benjamin 'Beast' Butler is commanding the Union effort?

Superb- the yankees were met with enthusiastic but inaccurate gunfire. The grapeshot proved to be incredibly short ranged.

I did try to stand as close together as possible to make the best target for grapeshot. Not my fault the Rebs were too used to shooting at ships in the distance.

Archduke - I can't remember my characters name, but Butler rings a bell. There didn't seem to be many tactical options apart from getting off the sinking transports and row like crazy for the shore.

Archduke Piccolo
The game was essentially an amalgam of the two attempts - but at this point it could still go either way. Butler is indeed in charge - albeit from afar!

Martin Rapier
The survival rate of the first wave of Yanks was surprisingly high! You were in fact Brevet Brigadier General Newton M Curtis