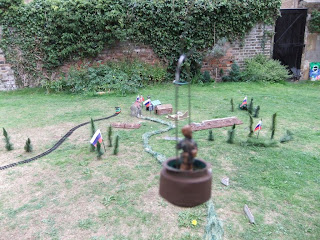 My Norwegian landing forces were aided (slightly) by our man in the tethered balloon. 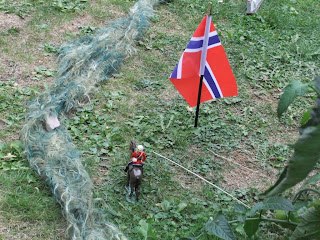 We were also heartened by the presence of Capt. Widdrinngton who, having recovered from Gettysburg, stopped by to say 'What ho!' en route to Svenhasselstein. 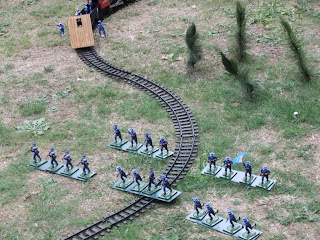 The brave lads of the Naval Brigade stride manfully forth, hoping for a gentlemanly fight. 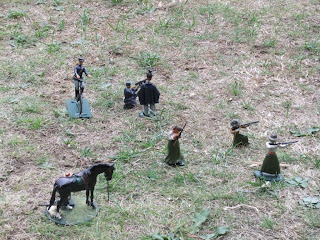 Sadly it was not to be - as the devilish Danes not only had an infernal machine gun but had also conscripted women sharpshooters!  Frightful! 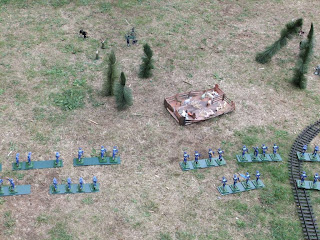 Nevertheless, my chaps made it as far as the farm with only a few gaps in the ranks. 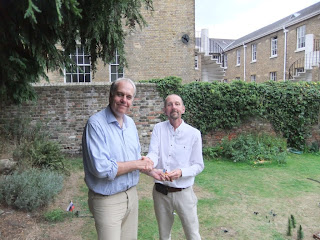 Mention should be made at this point of a visitor (and exiled Brit) from Norway in the shape of Nigel, seen here on the right bring introduced to Paul. 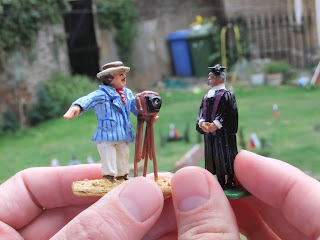 Nigel brought along a photographer he had made himself(!) which now forms part of Paul's collection.  Here he is with the Bishop of Odenso. 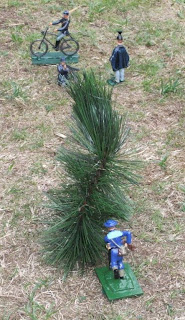 The Danish MG soon whittled one of my battalions to just one chap who sensible hid in the woods! 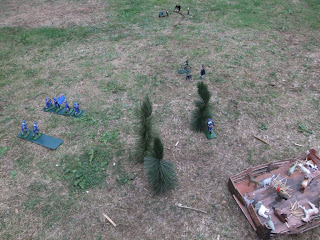 The remnants of the second battalion had two choices - fire at the MG team or charge it - so no choice at all!

Meanwhile the Provisional Naval Motor Patrol had worked it's way round the flank - covering a distance of over 30 feet!

The Dane's better mobility (they were largely cavalry and cyclists) meant that a breakthrough couldn't be achieved and so the invasion (we all knew it was just a feint, right?) was called off.

Paul's report appears below and is reproduced with his permission.  BRB=the Norwegians.  RWR=Danes.
BRB opened the game with a flank attack against the RWR right with 2 x regiments. Artillery exchanges being effective from early on - damage to the armoured train and hits on the RWR dismounted cavalry in the woods.
As the Naval Battalions closed on the first wood they were engaged by dismounted cavalry and a MG. These units promptly fell back to a second fire position.
With no movement to the front, RWR moved a horse artillery piece and Cav regt to the opposite flank. As the BRB advance continued things were beginning to look desperate...
Move 6 - the turning point. The BRB regts cleared the wood and were engaged by the MG, snipers, and 2 x Lt Gun. This weight of fire effectively removing them from the game.
RWR suffered casualties from artillery fire - and a light gun put of action.
BRB now launched a frontal assault with 2 x regiments. A heavy shell from RWR effectively destroyed an entire regt - and this was supported by MG fire.
With the rain beginning to fall, the game came to a close - with a final bit of skirmishing between a motor car patrol and a Lancer Sqn. An excellent game - lots of twists and turns - and it could have gone either way.
Observations.
The game was based on HGW's suggestion in LW for a mounted force v a dismounted force. Mobility played a very significant part - with the light guns and cyclist Mg's being very significant indeed.
Mounted Infantry can clearly be a significant asset.
Naval gunfire was an excellent addition, and the gunboats really added to the scenario.
RWR also used a reserve gunner to man a Heavy gun - with the Chauffeur and Nursing Sister of the Bishop of Odenso.
Desperate days indeed...
Posted by Tim Gow at 18:48

What a wonderful FLW battle with all sorts of interesting and unusual elements.

I particularly liked the warships and the 'Thunderbox'. I also have one of those mortars and had yet to find a use for it ... but I think that I may have now!

Continued splendid account of what looks like it was a great game. Good to see the visitors be they lead or human.

Gadzooks! That was a gripping account and no mistake! My one and only question - did the Thunderbox actually manage to fire and hit anything?

I also thought the naval dimension was a great addition to the affair.

David Crook
The 'Thunderbox' did indeed fire - but I used another gun as it's 'stunt double'. The mortar itself has a range of about 2 feet....

Bob Cordery
Like er, certain other games we are both familiar with, FLW offers the opportunity to squeeze impressive quantities of silliness into a single game.

tradgardmastare
Glad you enjoyed it - it may turn out to have been the last outdoor game of the year!