The roughest of the recent aircraft rescues was this Ju-87.  It’s the old - very old - Airfix kit which was originally released in 1957!  This one needed various bits reattaching and the wing realigning  the latter was achieved, more or less, with a knife, glue, plastic scrap padding and brute force.  As you can see from the photo, it’s close enough. 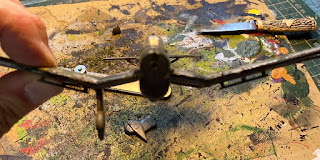 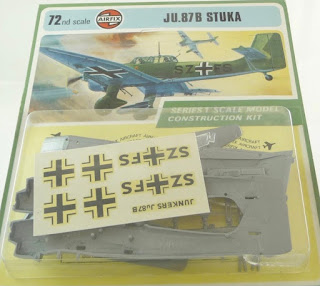 The packaging style of Series One kits in the early-mid 1970s. 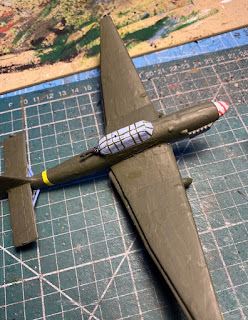 The original paintwork was very rough but I decided to paint over it, accepting the dodgy finish in the interests of a quick win and a pretty much free Stuka. I already have a couple in Luftwaffe markings so it’s off now to the decal box in search of inspiration.
Posted by Tim Gow at 22:18

I have discovered that you can never have too many Stukas!

That was my original Stuka kit, although the one I had came in a plastic bag! Extremely robust, it withstood years of hard play and only lost the prop blades. Would be great for gaming.

Martin Rapier
That's exactly why I felt this one was worth saving.

Jeffers
It's not the most detailed Stuka kit but definitely the most robust! Do you still have yours?

Sadly not. All my models (to be fair, they were in a state…) were thrown away when I left home. My decision, not my parents, so I’m to blame. I did well on your quiz though with 14 points!