Paris in the Springtime - part 4 - Free Man In Paris 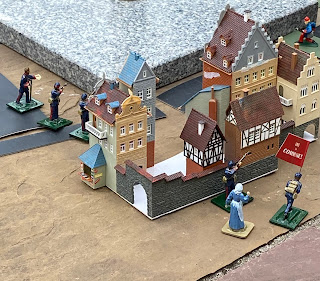 To galvanise and motivate the defenders notorious anarchist Louise Michel toured the front lines.  Here she is 'encouraging' some guardsmen. 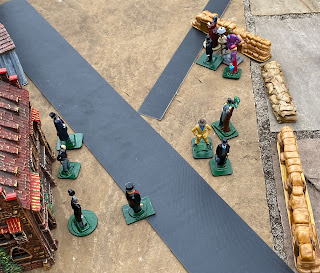 At the Hotel De Ville peace still reigned - despite the nearby fighting the emphasis here was very much on 'jaw jaw' rather than 'war war.'  Oh dear, 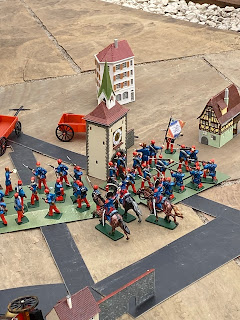 MacMahon's troops rolled forward inexorably.
By now, and by arrangement with the Prussians, Thiers, the Government's Chief Executive had sent two regiments of infantry by rail to enter the city from the north. 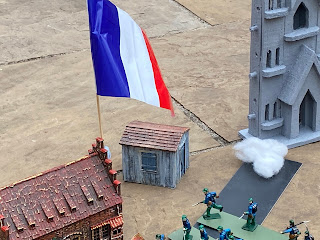 The new chaps were Bretons and no friends of Paris.  The main danger to them was from ill-aimed Government artillery shells!  In a happy ending of sorts, the Archbishop who you'll recall was being held hostage, was freed by daring agents in the service of Thiers and the worried cleric was soon safe behind Government lines. 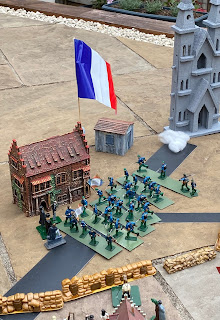 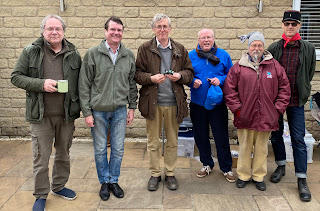 Here are some of the more poorly cast and badly painted figures used in the game.
From left: Colonel Megy, General Gallifet, General Cissey, General Cluseret, Marshal MacMahon, Colonel Rossel.
Well done to them all!
Posted by Tim Gow at 17:12

Another great game Tim - and centred on a precise scale model of Paris in the 19th century!

Great stuff - excellent. Wonderful vid too - from the days when Joni was young and Pat Metheny, apparently, was 11.

Thank you for your brilliant posts on another excellent outdoor game Tim! I always enjoy them!

Simon
I've had so much praise for the dodgy model of Paris that I'm beginning to suspect none of you have ever been there!

MSFoy
I think the music is 97 years younger then the battle - the vid was probably shot soon after the song was recorded.

Brad DeSantis
Thanks - as always - for the feedback. I have plenty more ideas (and toys) for a busy campaigning season!

Excellent looking game, Tim! The mismatched scales of the buildings works surprisingly well IMHO. Fewer homicidal car drivers than I remember from my trips there, but otherwise, a remarkable likeness! :-)

Chris Kemp
Even taking into account the artillery fire, I think crossing the roads in 1871 was safer than in modern Paris.