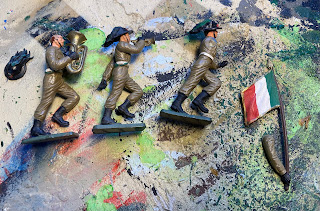 Following the Isonzo game, John mentioned he had a few broken figures which looked like my Starlux Bersaglieri. Some weeks later I dropped off some bits I had for John and he presented me with a bag of bits which included the disheveled trio above. Happily they only needed sticking back together and were then based and varnished to match my existing figures. John’s figures are in the front rank. A welcome addition but I’m still not convinced that running while playing tuba(?) is a good idea…. 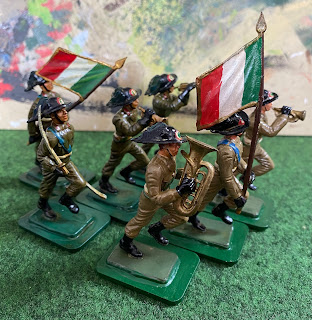 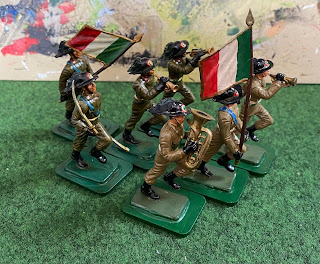 Here is their soundtrack amongst others on YouTube
https://m.youtube.com/watch?v=6ABLOJV9Uw8&feature=youtu.be

Running with a large brass instrument is _exactly _ what I would expect of Bersaglieri!

They look like they will make a perfect honour guard for the Italian soup tureen section.

Running with a cornet seems more dangerous. If you trip and fall on your face you're much less likely to swallow a tuba...

Mark, Man of TIN
Always a delight to watch!

Martin Rapier
I don't think my dentist would approve!

Archduke Piccolo
I hadn't though of to that way but you could be on to something...

Actually, perhaps it is not a tuba at all but, rather, a light infantry soup container for rapid distribution of minestrone?

Brad DeSantis
Hard work by Starlux, generosity by John, 30 minutes gluing and varnishing by me...

Simon
That explains the state of your shirt fronts....

Just simmer the shirt and then you have a stock for the next batch of souop - waste not want not.

I think if you're being shot at by Austrians or Germans, running with a tuba makes sense to some degree, though perhaps not as much sense as dropping it and running.